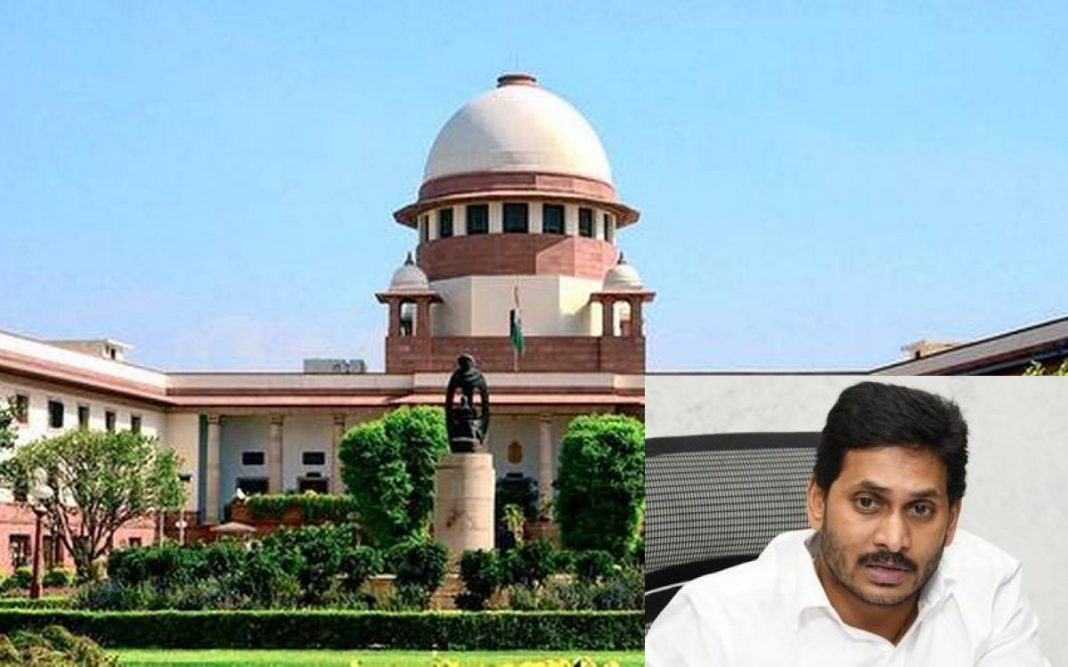 New Delhi (ILNS): The Supreme Court bench of Justices Ashok Bhushan, R Subhash Reddy and MR Shah today refused to interfere with the Andhra Pradesh High Court’s handling of the alleged Amaravati land scam case, but removed the gag order that the high court had placed on the reporting in the media and comments on social media on the case.

The Supreme Court has requested the High Court not to decide the writ petitions while issuing notices to ex-Adv Gen, DGP, DG (ACB).

In the hearings at the top court in the appeal by Andhra Pradesh government led Reddy, challenging the gag order passed by the high court in relation to the FIR registered against a former Advocate General and SIT probe into the Amaravati Land Scam Case, top lawyers presented their views.

The high court had stayed the investigation in relation to the alleged land scam in the then capital Amaravati in which the State’s Anti Corruption Bureau had registered an FIR against the daughters of a sitting Supreme Court judge.

Today Senior Counsel Dr Rajeev Dhavan, appearing for the Andhra government, said that the letter of March 23 was sent by the state government to the CBI and the entire judgment was based on this letter.

Dhavan was making his submissions on the question of whether it was a case of political mala fides or vendetta.

The alleged scandal was that the information about the location (of the capital city) was made in June 2014 and a large number of farmers sold land between June and December 2014. The alleged scam was regarding pool sharing.

Dhavan submitted that as soon as the complaint was filed and inquiries were being ordered, this writ petition was filed and it was decided on the same day.

Justice Bhushan at that point clarified that only an interim order was passed.

Dhavan reiterated that the question is could (even) an interim order be passed in such a case?

Justice Bhushan said: “That is another issue.”

However, Dhavan insisted: “This is the only issue.” An interim order cannot not be passed in a challenge to a letter of the CBI, Dhavan said. He said that this was entirely a political writ petition against the Chief Minister.

He asked: “Was the high court right in the instance where on the very same day that the writ petition was filed, it was heard at 5.30 pm and and an order was passed at 6.30 pm?”

Justice Bhushan said: “We are satisfied that the matter should be heard. We issue notice.”

Dhavan said: “I want an interim order my lord.”

Justice Bhushan said: “We will consider that too.”

“The land purchase is in public domain and the intention is only to malign the Chief Minister, because the present chief minister himself is facing a lot of corruption charges.”

Salve said that the court must not exercise jurisdiction under Article 136 and the matter must be left to the high court.

He also said that the high court is aware of what is happening in the state. “This former AG in his writ has clearly mentioned where all he had appeared against the current CM,” he said.

Dhavan said: “Mr Rohatgi has not mentioned anywhere whether an offence has been committed or not. This is a case of regime revenge. I used the phrase when I was defending Jayalalithaa and that was through normal procedure and not through a writ petition.

“No regime revenge takes place, no doubt it may take place sometimes, but does that mean that the next government cannot investigate the matter?”

“If there is a criminal case to be investigated, the answer must be first given is whether an offence has been committed or not.”

Salve argued that some aspects were revealed in the public domain.

On Rohatgi’s argument on the AG, Dhavan said that in every government the AG argues against someone, but does that mean that revenge is taken against such person?

Dhavan once again submitted that the order could not have been passed by the high court where no investigation had been conducted.”

The mater has been listed for the last week of January.

Did you find apk for android? You can find new Free Android Games and apps.
Share
Facebook
Twitter
Pinterest
WhatsApp
Previous articleSenior Congress leader Ahmed Patel dies at 71, condolence messages pour in across party lines
Next articleAllahabad HC accepts a plea for promotion of students up to class 8 without exams