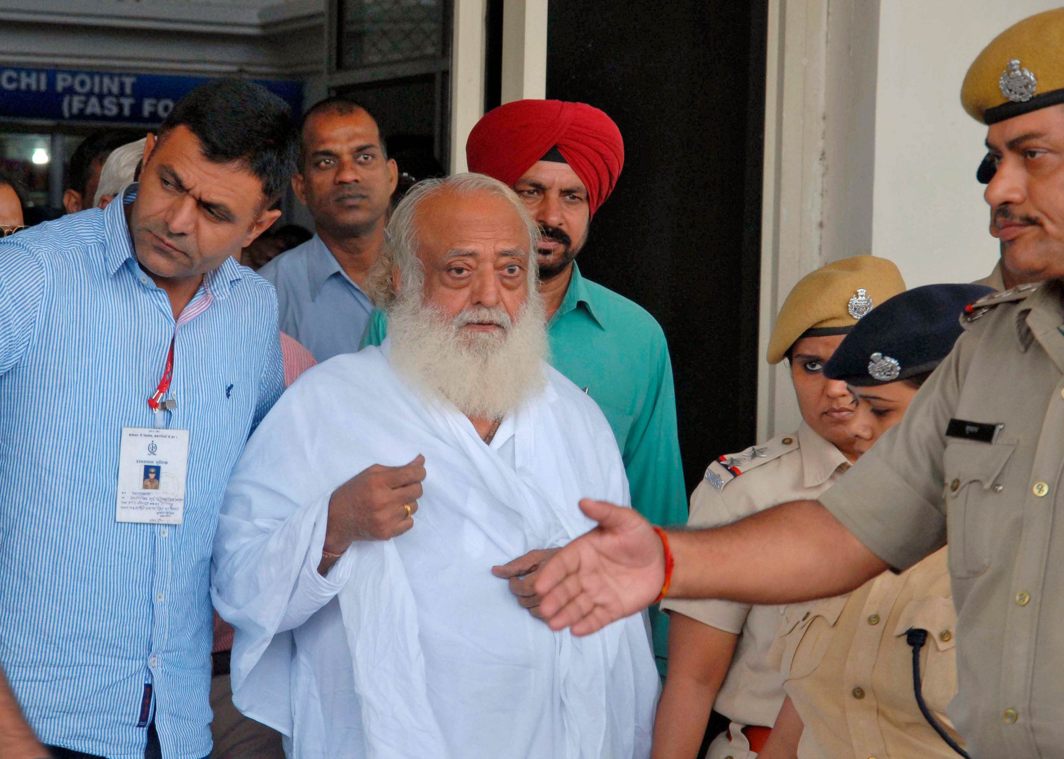 Above: Police escort spiritual leader Asaram Bapu (Centre) outside an airport after his arrest in Jodhpur, on September 1, 2013/Photo: UNI

Nearly five years after he was booked for raping a 16-year-old girl at his Manai Ashram on the outskirts of Jodhpur, 77-year-old Asumal Thaumal Harpalani, better known as Asaram Bapu, was, on April 25, sentenced to life imprisonment till death. 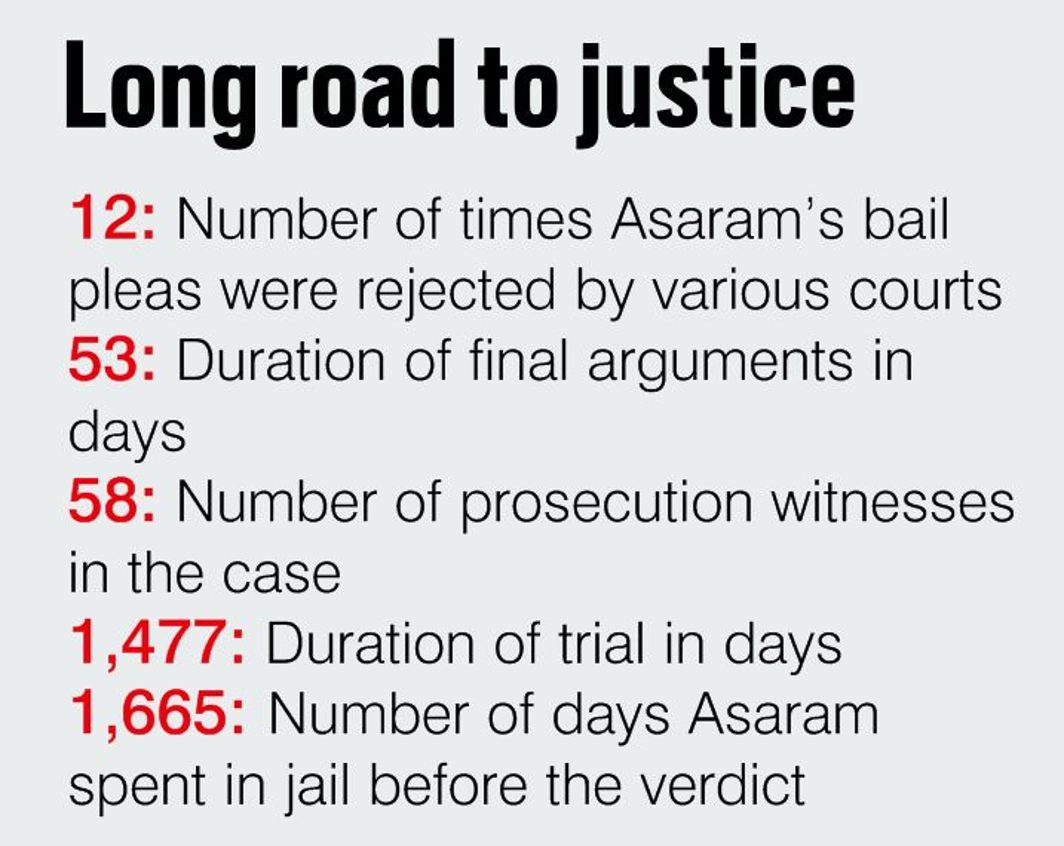 The godman, whose empire is estimated to be worth Rs 10,000 crore, said special judge Madhusudan Sharma, “not only broke the faith of the complainant but also spoiled the image of saints am­ong common men”. Asaram was handed down various sentences under Sections 376 (2)(f), 376-D (rape), 370(4) (trafficking), 342 (wrongful confinement) and 506 (criminal intimidation) of the Indian Penal Code and relevant sections of the Protection of Children from Sex­ual Offences (POCSO) Act. The Court also imposed a fine of Rs 3 lakh on him. The disgraced godman’s lawyer, Sajjan Raj Surana, who had urged the Court to grant his client a mild sentence on account of his old age and social work, said that he would challenge the judgment in the Rajasthan High Court.

Judge Sharma’s 453-page verdict, delivered at the makeshift SC/ST court (SC/ST courts in Rajasthan are authorised to try cases registered under POCSO) set up inside Jodhpur Central Jail amid apprehensions of violence by the godman’s followers, also awarded 20 years in jail to two of Asaram’s co-accused, Shilpi and Sharad, while it acquitted two others.

The 16-year-old rape survivor, who hails from Shahjahanpur in Uttar Pradesh, was a student at an Asaram-owned residential gurukul in Madhya Pradesh’s Chhindwara district. In August 2013, when the girl reportedly fell ill, her father—a devotee of Asaram—was instructed by Shilpi and Sharad to take her to the godman for treatment of “evil spirits” which, they said, had possessed her. She was then brought to Manai Ashram, about 30 km outside Jodhpur, where Asaram was then residing. On the intervening night of August 15-16 in 2013, Asaram reportedly summoned the girl to his “hut” af­ter ordering her parents to leave Manai. He then sexually assaulted her for over an hour and threatened to have her kil­led if she revealed anything to her parents.

The girl, however, narrated her ordeal to her father, who then filed an FIR against Asaram at Kamla Market police station in Delhi on August 19, 2013. The case was later transferred to Jodhpur, and Asaram, who absconded soon after reports of the rape complaint went public, was arrested from his ashram in Indore on August 31. He was brought to Jodhpur a day later to stand trial in the case and has been in jail ever then.

As was the case with Gurmeet Ram Rahim Singh, the other self-styled godman who is now in jail for raping his disciples, Asaram too was known to have a massive following of political bigwigs. A search on Google or YouTube of Asaram will show scores of videos of political leaders lining up to pay obeisance to this rapist godman. They include Asaram holding Atal Bihari Vajpayee (when he was prime minister) by the hands and making him dance on stage, Narendra Modi (during his stint as Gujarat chief minister) singing his praises, BJP chief ministers Shivraj Singh Chouhan, Vasundhara Raje and Raman Singh falling at his feet at public functions, etc. During his trial, Asaram had also submitted before the court citation letters from former presidents KR Narayanan and APJ Abdul Kalam, former vice-president Bhairon Singh Shekhawat, Congress leaders Digvijay Singh, Kamal Nath and Kapil Sibal, former Haryana CM Bansi Lal, former governors Balram Jakhar and Sudarshan Agrawal, and a score of senior BJP leaders to buttress his claim of having performed charitable acts over the years.

This conviction, however, only brings closure (although the verdict will be challenged by his lawyers in higher courts) to one of several cases. Asaram and his son, Narayan Sai, are also facing trial for raping two sisters in Surat in 2013. In June 2016, the Ahmedabad Crime Branch had also charged Asaram and two others—Kartik Haldar alias Raju and Dr KD Patel alias Kantilal—for attempting to murder Raju Chandak, who was Asaram’s disciple for nearly two decades.