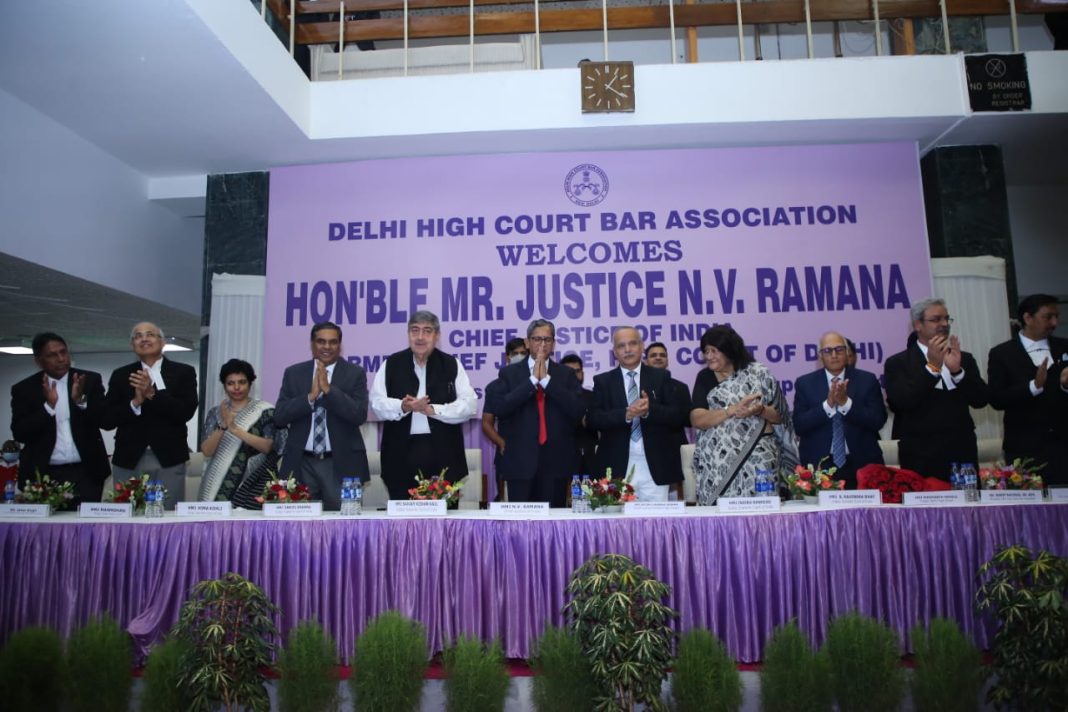 The Chief Justice of India who will demit the office tomorrow was given a farewell by the Delhi High Court Bar Association (DHCBA) to bid him farewell on his superannuation.

He added “I hope some more judges will join soon”.

CJI thanked everyone from the Delhi Bar for their extended support to him during the “challenging days” before he took the charge as the CJI.

With nostalgia in eyes, CJI Ramana said “I remember the days of the challenge. An instance had taken place two years back when I was a judge. Every member of the Bar, especially in Delhi, stood in solidarity and passed a resolution supporting me. I am extremely proud and happy to have such support.”

In his speech CJI mentioned that administration of justice is a challenge and that he learned a lot about it from the Registry, including listing of matters, preparation of roster and allotment of cases at the Delhi High Court.

CJI praised the prevalent practices pat the Delhi High Court and stated that he enjoys the amount of litigation, variety of subjects, that cannot be compared with any High Court in the country.

He said that he is amazed at the art of survival we learn in Delhi High Court where the lawyers have to deal with diffferent subjects with thorough knowledge and that too in a within a given time. The discipline and courtesy shown to the other side is also amazing.”

The Delhi High Court Chief Justice Satish Chandra Sharma and all other judges of the High Court also made to the farewell of CJI.

CJI Ramana said that he is very touched by the amount of affection, and love shown by everyone. He thanked all his fellow service people and said “My brother and sister judges, members of the Bar, and you have encouraged me, supported me and hugged me”.

CJI Ramana: Delhi HC has special features. It’s located in capital, the litigation, you cannot compare it with any other high court in the country.

CJI Ramana also thanked Justice Hima who was sitting next to him and said , I am thankful to her also , she helped in dictating judgments and hearing cases.

I thank all of you, the affection shown by all. First time in my life I’ve seen such huge amount of lawyers attending. He ended by thanking all his predecessors and wished luck to the successors.