The DGCA submitted that such passengers who aren’t wearing masks properly after repeated warnings would be de-boarded from planes before departure and treated as being “unruly”. 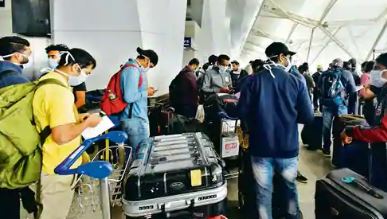 The DGCA submitted that passengers who aren’t wearing masks properly after repeated warnings would be de-boarded from planes before departure and treated as being “unruly”. The submissions were made before a division bench of the Delhi High Court presided over by Justices Navin Chawla and C. Hari Shankar, who after the said submissions said that it hoped action would continue in the same spirit considering the safety of passengers given the Covid-19 infection.

The bench went on to say that it was initially planning to keep the suo motu matter open for continuous monitoring of the implementation of directions issued by the court earlier, but, after noticing the proactive action by DGCA, it has decided to close the case. The two judges also welcomed the step taken by the DGCA of initiating punitive action against the violators.

During the course of the hearing, Additional Solicitor General (ASG) Chetan Sharma and Advocate Anjana Gosain submitted on behalf of DGCA that following the directions of the court, the civil aviation body has issued a circular on March 13 relating to strict guidelines to be followed in airports.

“On board the aircraft, in case any passenger does not adhere to wearing of mask properly even after repeated warning, he/ she should be de-boarded, if need be, before departure,” the circular stated.

“In case, any passenger on board an aircraft refuses to wear mask or violates the ‘Covid-19 Protocol for passengers’ even after repeated warnings, during the course of the fight, such passenger may be treated as ‘Unruly Passenger’ as defined… Civil Aviation Requirements (CAR)…and the procedure in respect of handling such unruly passenger, as provided in above mentioned CAR, shall be followed by the concerned airlines,” it said.

Advocate Gosain contended before the bench that in a Jammu to Delhi flight, on March 16, four passengers were declared unruly for not properly wearing masks and were handed over to the security officials while also adding that surprise checks would also be conducted by the authorities.

“You have done a wonderful job. We are really impressed,” the bench remarked while also directing ASG to ensure that such steps are also taken in respect of other public transport like the railways and buses.

Justice Hari Shankar had on March 8 taken suo motu cognizance of the alarming situation where people travelling from Kolkata to Delhi on an Air India flight did not wear masks. “To the perception of the Court, such a situation, in the present scenario, when the country is seeing a resurgence of COVID-19 cases, after they had shown signs of ebbing, is completely unconscionable,” Justice Hari Shankar had then said.

The court had further said that passengers in a flight are in a closed air-conditioned environment, and, even if one of the passengers suffers from Covid, the effect on other passengers could be disastrous.

“It is a matter of common knowledge that being within arm’s length distance of a Covid carrier, even if he is asymptomatic and is merely speaking, is more than sufficient to transmit the virus,” it had said.