Illegal sand mining in UP is a grave threat to environment and ecology: NGT told 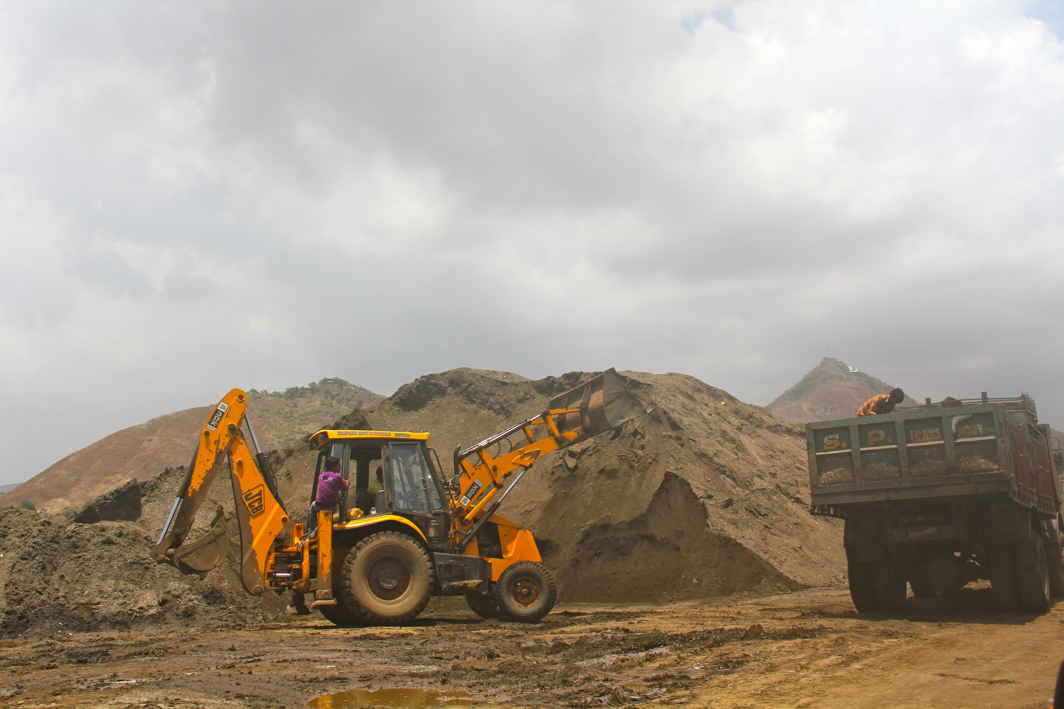 The National Green Tribunal has considered the suggestion made in a report of the “Oversight Committee” headed by the former Justice SVS Rathore in a matter pertains to illegal sand mining in Prayagraj District in Uttar Pradesh.

The Bench consisting of Adarsh Kumar Goel, Chairperson, S.K. Singh, Judicial Member, Dr. Nagin Nanda, Executive Member has said “we have considered the report and we do not find any reason not to accept the recommendation. Accordingly, the report is accepted and directions are issued in terms thereof. The State of UP and concerned Authorities in the State may take further action.”

The “Oversight Committee” has recommended that specially in Districts of Prayagraj, illegal sand mining done without a Mining Plan in utter violation of environmental norms and is a grave threat to environment and ecology. The State Government should have a zero tolerance on illegal mining and the Directorate of Mining and District Administration should immediately enquire into all such cases and if found correct take stringent legal action against the guilty.

2- the llegal mining invariably leads to reckless damage to environment. Hence, utmost efforts are required in surveillance, patrolling and enforcement figures. No penalty has so far been realized from any of the illegal miners. This calls for a strict, impartial, transparent and deterrent environmental compensation regime. State of U.P. needs to evolve a mechanism for the recovering compensation for the damage to the environment from illegal mining.

3- DSRs need to be prepared immediately and should be based on physical surveys and replenishment studies in regular manner. While awarding lease deeds, important environmental parameters like deposition and replenishment of sand, areas of erosion, distance from infrastructural structures needs to be considered by all the concerned authorities. Before award of LOI, physical inspection should be mandatory.

4- Storage Godowns should be at least 5 kms away from the river bank. Otherwise, illegal mining can be carried on under the garb of storage by the leaseholder himself. Geo-fencing of sites, their physical demarcation, allotment of geo-coordinates to all the pillars and their constant physical inspection

5- The Committee observed that there has to be a mechanism to ensure that the actual mining activity conforms to the approved Mining Plan and the approved Environment Management Plan (EMP). Environment Department can empanel some experts/expert institutions with standard TORs and Remuneration terms which could be utilized by the Mines Department on a regular basis. This way the DM, Prayagraj and other concerned authorities can access good technical experts with standard conditions in a transparent way without bothering about tedious time-consuming tender formalities.

6- The Environment Department can empanel some reputed institutions with standard terms for preparing environmental restoration plans which could be used directly by the Mining Department without the arduous formalities.

7- As far as the enforcement efforts in Prayagraj is concerned, there is an urgent need to augment the monitoring of illegal sand mining in district Prayagraj. Accountability needs to be fixed for the laxity. Constant monitoring of illegal sand mining must be done with drones, aerial surveys, ground surveys through dedicated task force at district level/tehsil level. E-surveillance through UAVs/Remote Sensing is must to ensure that the mining activity is as per the approved mining plan and no illegal mining, detrimental to environment, is going on. The State Government can also organise night-surveillance of mining activities through night-vision drones at district level. Night vision drones could be used for checking mining activity at night. Sensitive spots need to be identified and police presence- both static presence and dynamic patrolling needs to be beefed up there. DMs / SSPs be made directly responsible for checking illegal mining.

8- So far as confiscation of vehicles is concerned, under the provisions of the MMDR Act, 1957; the competent authority is the court of Chief Judicial Magistrate for lodging complaints. In the complaints, orders of the Hon’ble NGT are referred to. Some of the confiscated vehicles are released by the Hon’ble Court obtaining an affidavit and trial continues in due course. This is a practice not only in Prayagraj, but in other districts too. There is need to amend the rules/regulations and the confiscating officer needs to be designated in consonance with amendments made in Forest Act/Rules and the amount so collected to be remitted to UPPCB/PCCs for being utilised for restoration of environment.

9- The State Government must address the issue of monitoring gaps in illegal mining with the following recommendations to remedy the situation: Installation of CCTV Cameras should be at mining points to verify the amount of sand extracted. To inspect the mining operations, there is need for regular patrolling by the police. Daily Mining reports/regular patrolling should be sent to the District Magistrate. FIRs should be lodged in case of any illegal mining. The DM and the SP should carry out surprise checking. In order to stop illegal sand mining, it shall be the duty of the concerned authority to do area survey at regular intervals.

11- Direction may be issued to the Principal Secretary, Mining to take immediate steps for amendment of rules so that the Courts may order the fine as ordered by the Hon’ble NGT.

12- As per Hon’ble NGT orders it was directed that Chief Secretary must ensure compliance of Sand Mining Guidelines. The Oversight Committee recommends periodic review at CS level which will automatically improve enforcement effort and sort out a number of co-ordinational issues.”

The Court has said, we have also dealt with remedial action against the issue of unscientific mining in our recent order in the case of National Green Tribunal Bar Association v. Virender Singh (State of Gujarat) as follows:

“27. We direct all the States/UTs to strictly follow the SSMG-2016 read with EMGSM-2020 reinforced by mechanism for preparation of DSRs (in terms of directions of this Tribunal dated 14.10.2020 in Pawan Kumar, supra and 04.11.2020 in Rupesh Pethe, supra), Environment Management Plans, replenishment studies, mine closure plans, grant of EC (in terms of direction dated 13.09.2018 in Satendra Pandey, supra), assessment and recovery of compensation (as per discussion in Para 25), seizure and release of vehicles involved in illegal mining (in terms of order dated 19.02.2020 in Mushtakeem, supra), other safeguards against violations, grievance redressal, accountability of the designated officers and periodical review at higher levels. As already noted, EMGSM-2020 contemplates extensive use of digital technology, including remote sensing.

28. We further direct that periodic inspection be conducted by a five-members Committee, headed and coordinated by the SEIAA and comprising CPCB (wherever it has regional office), State PCB and two expert members of SEAC dealing with the subject. Where CPCB regional office is not available, if MoEF&CC regional office is available, its Regional Officer will be included in the Committee. Where neither CPCB nor MoEF&CC regional office exists, Chairman, SEIAA will tie up with the nearest institution of repute such as IIT to nominate an expert for being included in the Committee. Such inspection must be conducted at least thrice for each lease i.e. after expiry of 25% the lease period, then after 50% of the period and finally six months before expiry of the lease period for midway correction and assessment of damage, if any. The reports of such inspections be acted upon and placed on website of the SEIAA. Every lessee, undertaking mining, must have an environment professional to facilitate sustainable mining in terms of the mining plan and environmental norms. This be overseen by the SEIAA. Environment Departments may also develop an appropriate mobile App for receiving and redressing the grievances against the sand mining, including connivance of the authorities and also a mechanism to fix accountability of the concerned officers. Recommendations of the Oversight Committee for the State of UP quoted earlier may be duly taken into account.

The mechanism must provide for review at the level of the Chief Secretary at least once in every quarter, in a meeting with all concerned Departments in the State. The Chief Secretary UP may ensure further action in the light of the report of the Oversight Committee.

Similarly, at National level, such review needs to be conducted atleast once in a year by the Secretary, Environment in coordination with the Secretaries Mining and Jalshakti Ministries the CPCB.

29. We further direct all the States/UTs to publish their annual reports on the subject and such annual reports may be furnished to MoEF&CC by 30th April every year giving status till 31st March. First such report as on 31.03.2022 may be filed with the MoEF&CC by all the States/UTs on or before 30.04.2022. The report may also be simultaneously posted on the website of the Environment Department of the States/UTs. Based on such reports, MoEF&CC may consider supplementing its Guidelines from time to time. The MoEF&CC may prepare a consolidated report considering the reports from the States/UTs and publish its own report on the subject, preferably by 31st May every year.

30. We direct the Secretary MoEF&CC to convene a meeting in coordination with the CPCB and Mining and Jalshakti Ministries of Central Government and such other experts/individuals at National level and representatives of States within three months for inter-action on the subject which may be followed by such meetings being convened by the Chief Secretaries in all States in next three months. Holding of such meetings will provide clarity on enforcement strategies and help protection of environment.”

The Bench has disposed this matter in terms of above stated directions and held that disposal of this application will not affect the orders passed with regard to constitution of the Oversight Committee covering environmental issues.

This Committee will continue till further orders, as it has been constituted on the request of the State itself and is rendering useful service without any grievance from any quarter.