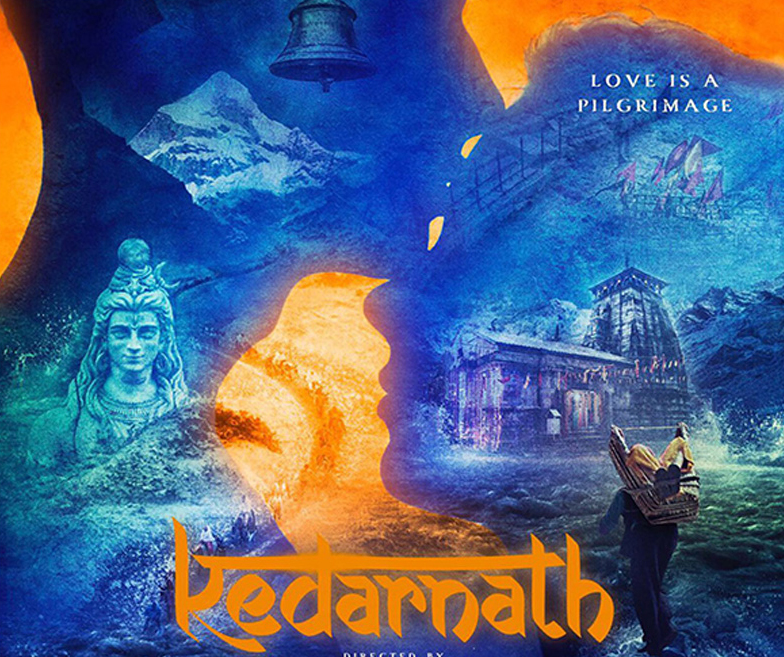 Above: A poster of Kedarnath, a film set in the background of the 2013 Uttarakhand floods

Despite the Uttarakhand High Court dismissing a plea to ban this film, the state government asked district magistrates to decide on screening the movie and seven districts promptly banned it

Though the Uttarakhand High Court, in a heartening development, had dismissed a PIL seeking a ban on Kedarnath, the state government issued an order to do just that.

Its order to ban the film did not set a new precedent. There’s a long list of movies which have been banned in the past for one reason or another.

If in 1996, Fire had to be withdrawn under pressure from Hindu fundamentalists for showing a lesbian relationship, the shooting of Water in Varanasi had to be abandoned after the same fringe groups vandalised its sets in 2005. Jodha Akbar in 2008 and Padmavat in 2017 also faced strong opposition, the former for showing Jodha as Akbar’s wife and the latter for allegedly distorting Rajput history.

Hindus alone are not in the vanguard of such protests. The Da Vinci Code was banned in 2006 after Christians protested against the portrayal of Jesus Christ and Christianity, while the wrath of Muslims saw Vishwaroopam being banned for showing the community in a poor light.

What is worrisome now is Uttarakhand Tourism Minister Satpal Maharaj’s statement that in future “the state government would consider vetting a movie script” before allowing shooting in the state if it pertained to a “sensitive issue”. In other words, for movies to be shot in the hill state, the government intends to make the Central Board of Film Certification (CBFC) redundant. That would be unprecedented as even the Supreme Court respects the censor board’s jurisdiction. While dismissing the Rajasthan Karni Sena’s petition seeking a ban on the release of Sanjay Leela Bhansali’s period drama Padmavati, starring Deepika Padukone and Ranveer Singh, in November 2017, the Supreme Court had underlined the role of the CBFC.

A bench headed by then Chief Justice Dipak Misra had said: “The censor board has a role to play and the Supreme Court cannot assume that role. Why should the court interfere to stop the release of a movie which has not been cleared by the censor board?” The judges emphasised that it was the prerogative of the censor board to review a film and decide if it could be released. Yet, several states did not allow the film to be released as it “distorted Rajput history”, an opinion which was formed even before any of the protesters had seen it. Subsequently, after Padmavati became Padmavat and Bhansali agreed to incorporate some other changes, the film made it to the theatres.

If Padmavat was blocked for allegedly showing Rajputs in a poor light, Kedarnath, a film in which Sara Ali Khan and Sushant Singh Rajput are starring, hit the roadblocks for hurting the religious sentiments of Hindus and promoting love jihad. The censor board had cleared the film after two cuts, but that obviously did not satisfy a section of the BJP in Uttarakhand, who saw the love story between Sara (a Hindu pilgrim) and Sushant (a Muslim porter) in the backdrop of the flash floods of 2013 as an “effort at promoting love jihad”.

After the Uttarakhand High Court refused to ban Kedarnath, the state government found a way to block its release, in a move to appease its constituency. A committee headed by Maharaj reviewed the film and found it to be “completely against our beliefs and tradition and has made fun of our emotions”. The minister said: “It has all the ingredients to disturb the law and order situation in the state. People living in hills are highly sensitive towards their tradition and culture and have deep-rooted faith in religion.”

This committee was formed after the High Court, on December 6, dismissed a petition filed by one Darshan Bharti seeking deletion of certain “objectionable scenes” which “hurt the religious sentiments of Hindus, more particularly the devotees of Lord Shiv”, the presiding deity at the Kedarnath shrine.

The High Court asked AS Rawat, the senior counsel representing the petitioner, if it “could don the robe of censor board and cut certain parts of the movie, which according to the petitioners is objectionable, in the exercise of our powers of judicial review under Article 226 of the Constitution of India”. The senior counsel then drew the attention of the judges to the Cinematograph Act of 1952 which empowers the central government or the local authority to susp­end exhibition of a film if it is likely to cause breach of peace.

The Court then dismissed the petition and refused to issue any directions to the authorities. The bench of Chief Justice Ramesh Ranganathan and Justice Ramesh Chand Khulbe said: “Don’t see the movie if you don’t like it. We are not the censor board. We are a democracy and everyone is free to exercise their rights. State shall ensure law and order is maintained.”

Maharaj’s statement, making a case for vetting of scripts before allowing movies to be shot in the state, was found to be “highly condemnable” by former Information Director of Uttar Pradesh Arvind Narain Mishra who is also into filmmaking. The UP government, he said, vetted scripts of only those films which were made with state subsidy.

If the Uttarakhand government presses ahead with its decision, it would be against freedom of expression and won’t stand legal scrutiny. “It would be like writing a novel in Uttarakhand and then submitting it to the government for perusal before its release,” he said.