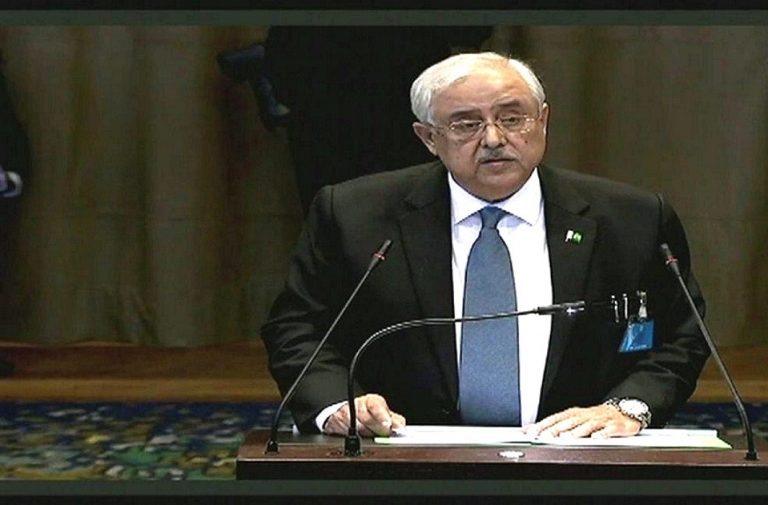 Pakistan on Tuesday claimed at the International Court of Justice that India failing to rebut clear and necessary inferences  of providing an authentic Indian passport to Kulbhushan Jadhav in a false Muslim “cover name” is compelling evidence that India’s hands are sullied and that its claim to seek consular access is founded upon a bed of moral turpitude.

Counsel for Pakistan Khawar Qureshi said Jadhav was responsible for a trail of destruction and numerous deaths of civilians. He further calls Jadhav an “instrument of India’s official policy of terror”.

“Thanks to the Pakistani security forces, Jadhav was unable to wreak havoc in India. India and Jadhav must face consequences,” he said on the second day of the hearing in the Kulbhushan Jadhav case at the Hague, a day after Harish Salve, representing India had ripped apart the manner in which a military court had awarded the death sentence to the retired Indian sailor.

Earlier in the day, as hearing were about to begin, Pakistan requested to adjourn the hearing to appoint a new ad-hoc judge after Tassaduq Hussain Gillani, the ad-hoc judge for Pakistan in the ICJ suffered a cardiac attack ahead of the hearing. The demand was rejected.

Jadhav, a retired Indian Navy officer, was sentenced to death by a Pakistani military court on charges of espionage and terrorism in April 2017. The four-day hearing opened on Monday at the ICJ headquarters in The Hague amidst heightened tensions between India and Pakistan following one of the worst terror attacks in Jammu and Kashmir by Pakistan-based
Jaish-e-Mohammad terror group that killed at least 40 CRPF soldiers. Today’s hearing shortly after Pakistan prime minister Imran Khan said his country will retaliate if India launches military strikes in the aftermath of the Pulwama terror attack. Accusing India of playing judge and jury, Khan said New Delhi had blamed the attack on Islamabad “without any proof”, he said at a news conference in Islamabad.

Yesterday, Indian counsel Salve on Monday had told the ICJ that Pakistan had not furnished any credible evidence to show Jadhav’s involvement in any act of terrorism and that India responded to the request for assistance in the investigation on June 19, 2017. “His (Jadhav’s) purported confession clearly appears to be coaxed. India reminded Pakistan that it is Pakistan government which hasn’t ratified SAARC convention on legal assistance in criminal matters,” Salve said.

But Pakistan’s Attorney General Anwar Mansoor Khan said that Jadhav’s trial was “fair and as per constitution” and alleged that “some are sending spies to create chaos” in his country. “Over 70000 Pakistani lives have been lost in cross-border terrorism. We are fighting the menace of terrorism within and outside. Jadhav is part of RAW, India’s military intelligence wing.”

Pakistan said, “Jadhav’s admission includes the following: That he was a serving officer due to retirement in 2022.” Qureshi reiterates the questions demanded by Pakistan. “It is a pity that India attempts to block the truth every time.”

That Jadhav was kidnapped from Iran is ridiculous, said Pakistan. “India’s demand of release and return for Jadhav is a ‘modest’ claim,” Qureshi said. “I have had the honour and privilege to represent India in the past, but the incarnation of the country before this court is not one I recognise,” Qureshi said and added these are proceedings lodged for political theatre and they should be dismissed.

“Since 1947 India has consistently pursued the policy to destroy Pakistan. India has blocked the water of Indus river which is in clear violation of the Indus water treaty. On humanitarian grounds we allowed the family of Jadhav to meet his family. I ask India to present one example as to when they have given such access to a person arrested in espionage,” Qureshi said.