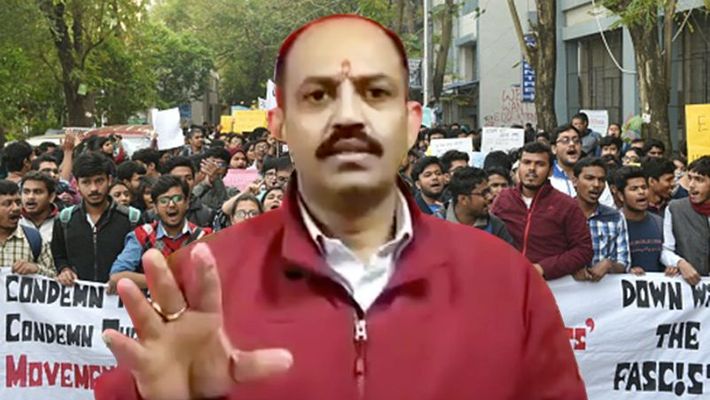 A Delhi court has rejected the anticipatory bail application of Pinky Chaudhary, the president of Hindu Raksha Dal, accused in the raising of anti-Muslim slogans at Jantar Mantar.

The court said the accused has made serious allegations and in the video clip, he is seen making derogatory remarks against a particular community.

Additional Sessions Judge Anil Antil, in his judgment, said that even in an interview given to a YouTube news channel at Jantar Mantar, the accused made such objectionable speeches that attempted to create enmity between the two communities. The attitude of the accused is undemocratic.

The advocate appearing for the police, objecting to the anticipatory bail, said that it is clear from all the facts and evidence that the accused is promoting enmity between different religions. Two groups of people are being instigated by the accused. He said that this serious allegation is against the country.

He said that is the reason why a case was registered against the accused under Section 153A of the IPC (promoting enmity between different groups and doing acts prejudicial to the maintenance of harmony) among other sections. He said that the accused has to be interrogated in custody. In this case the anticipatory bail application should be rejected.

During the hearing, the court had reprimanded, questioning the investigation of Delhi Police. The court had said that why the police did not interrogate the reporter of the YouTube news channel when he was seen deliberately raising objectionable questions to instigate people.

Reliance was made on the case of Ramesh Dalal (Supra), in which the Supreme Court was considering the broadcast of TV serial Tamas allegedly depicting communal tension and violence during pre-Partition times, and the Supreme Court held that there was no reason to differ with the decision of the Censor Board which had cleared the film for exhibition from taking into consideration the view point of the public acceptability, amongst other reasons discussed therein.

Also Read: Merely recovery of stolen property found from the place of the accused cannot make them offender, says SC

Further, Patricia Mukhim (Supra) was concerning a Facebook post where the appellant had agitated the issue of assault on non-tribal youths with lethal weapons and the ‘apathy shown by the State authorities including the Chief Minister’, the Court further cited.

Objecting to the bail, the investigating officer of the case had presented the transcript of the 11-minute video given by the accused at Jantar Mantar to a reporter of the channel. On August 13, the court had refused bail to three other accused.

On August 8, the Court had said on the slogans raised by the accused at Jantar Mantar showed their undemocratic attitude and cannot be expected from the citizens of this country.

Did you find apk for android? You can find new Free Android Games and apps.
Share
Facebook
Twitter
Pinterest
WhatsApp
Previous articleMerely recovery of stolen property found from the place of the accused cannot make them offender, says SC
Next articleLong Read: Justice Yatindra Singh on legendary advocate Satish Chandra Khare and his advice from 1976