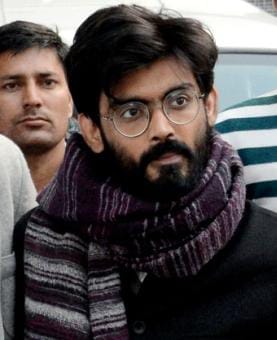 A local court in the national capital on Friday granted bail to former JNU student Sharjeel Imam in a sedition case of 2019.

However, Imam would remain behind the bars as he was yet to get bail in other cases pending against him, including the larger conspiracy leading to riots in Delhi.

The former JNU student was granted bail in the FIR registered at New Friends Colony Police Station, alleging that his ‘provocative speech’ against the Citizenship Amendment Act (CAA) and the National Register of Citizens (NRC) at Jamia Millia Islamia led to violence in the area.

A detailed copy of the order passed by Additional Sessions Judge Anuj Agrawal is awaited.

On September 26 this year, the Delhi High Court had permitted Imam to withdraw his application for regular bail and directed the trial court to first consider his application seeking relief under Section 436-A CrPC on the ground that he has remained in custody for 31 months.

Under Section 436-A, a person can be released by the court on bail before the conclusion of trial, if he has undergone an imprisonment of up to half of the maximum sentence specified.

Justice Anoop Kumar Mendiratta had observed that the trial court should take into consideration the order by Supreme Court on keeping the offence of sedition in abeyance, while taking a decision on Imam’s application.

Bail was denied to Sharjeel by the Saket Court earlier on the pretext that the tone and tenor of his ‘incendiary speech’ had a debilitating effect upon public tranquility.

Following the High Court order, the former JNU student moved an application in the trial court under Section 436A.

Imam has argued that since he has been incarcerated for about 31 months after being arrested in February 2020, he was entitled for the benefit of being released.

As per Section 436-A, Imam has already undergone detention for more than one-half of the maximum period of imprisonment under Section 153A of IPC. Section 153A provides for a maximum of three years of punishment.

Representing Imam, Advocate Ibrahim Mir said the trial court, while dismissing his bail plea, had only made observations against him with respect to offences under Section 153A and 124A of IPC and opined that no case was made out under other offences.

He argued that the only offence which now warrants consideration of the trial court was Section 153A.

Mir sought for a clarification that the pendency of his bail plea in the High Court should not come in the way of deciding his application under Section 436A CrPC before the trial court.

The prosecution, however, submitted that the bail plea pending before the High Court may be withdrawn in entirety, as it was wrong to consider the application under Section 436A CrPC in a piecemeal with reference to Section 153A of IPC.