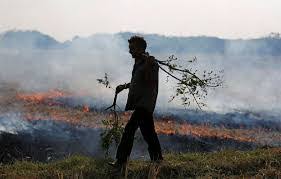 New Delhi (ILNS): The Supreme Court today agreed to examine a suggestion to withhold Minimum Support Price (MSP) until a verification has been made that a farmer has not indulged in stubble burning.

A three-judge bench comprising the Chief Justice S. A. Bobde, Justice A. S. Bopanna and V. Ramasubramanian was hearing a fresh plea suggesting that a portion of MSP should be withheld in order to verify whether a farmer is indulged in stubble burning or not.

Advocate Charanpal Singh Bagri, appearing for the farmers, however, objected to the suggestion bringing the court’s attention to the November 5, 2019 order of the Supreme Court which had directed grant of compensation to those farmers who were not indulged in stubble burning.

Solicitor General Tushar Mehta also did not show his inclination towards the suggestion and sought time on behalf of the government to file its reply.

The bench, however, sought to know as to who will be responsible for supervision and verification of the farmers indulged in stubble burning.

The matter relates to stubble burning in NCR and despite a ban on stubble burning in Punjab and Haryana, farmers on account of financial constraints continue to do so since they are unable to purchase environment friendly equipment for crop residue management.

Read Also: SCBA’s letter to SC for the resumption of proximity card for using the Library

According to the Central Pollution Control Board, stubble burning was an important factor behind air pollution in Delhi-NCR last year, contributing up to 44 per cent of the air pollution in November.

The bench has listed the matter for next hearing on October 16.

Did you find apk for android? You can find new Free Android Games and apps.
Share
Facebook
Twitter
Pinterest
WhatsApp
Previous articleGovt to compensate families if Covid-19 deaths happen due to hospital negligence: Bombay High Court
Next articlePIL filed in Supreme Court regarding the agitation against the farmers