Supreme Court places strict ban on use of disinfecting tunnels, slams govt for lack of law and clarity 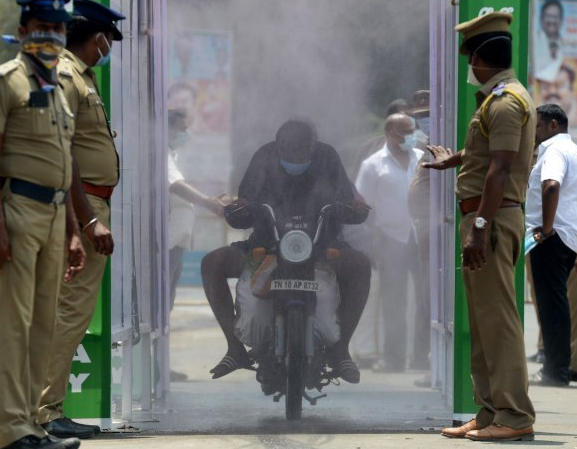 New Delhi (ILNS): Official directives on these had gone out earlier, now the Supreme Court has also banned the use of disinfecting tunnels. Yesterday, the top court issued directives to ban the use of such tunnels, involving spraying or fumigation of chemical /organic disinfectants on humans on grounds that they were harmful to the human body.

The bench of Justices Ashok Bhushan, R Subhash Reddy, and MR Shah slammed the Central government and stated in its 37-page verdict: “We are of the view that for spraying disinfectant on human body, fumigation or use of UV rays against the human body, there has to be regulatory regime when respondent No.1 (Centre) itself is of the view that such use is not recommended.” The bench emphasized that mere advisories from the government in this regard are not adequate.

The order came after a petition was filed by Gurusimran Singh Narula, a final year student from Rajiv Gandhi School of Intellectual Property Law, IIT Kharagpur, seeking an immediate ban on the use, installation, production, or advertisement of disinfectant tunnels set up to curb the spread of novel Coronavirus. The plea sought a ban on spraying or fumigation of organic disinfectants and exposing humans to ultraviolet rays.

The court directed that the Centre may consider and issue necessary directions in the exercise of powers vested in it under the Disaster Management Act, 2005, to prevent “exposure of human beings to artificial ultraviolet rays.”

The bench pointed out a legal vacuum with regard to spraying of such disinfectants and fumigation or use of Ultra Violet rays against the human body and said that mere advisories are not enough. When a statute confers power on authority and that power is to be exercised for the benefit of the people in general, the power is coupled with the duty, said the court order.

Also Read: Yatin Oza case: There is a parliament, an executive and a judiciary- if you say everything is wrong, then there is anarchy, observes Court

The bench noted that an affidavit was filed before it by the Centre with regard to the use of UV rays to disinfect or sterilize edible food items like fruits and vegetables. The Central government had also informed the apex court that the guidelines and Standard Operating Procedures (SOPs) issued by the Ministry of Health and Family Welfare (MoHFW) have advised against the use of disinfectant tunnels and sprays for people as a measure against COVID-19.