Ukraine presents its case before the International Court of Justice, accusing Russia of committing genocide 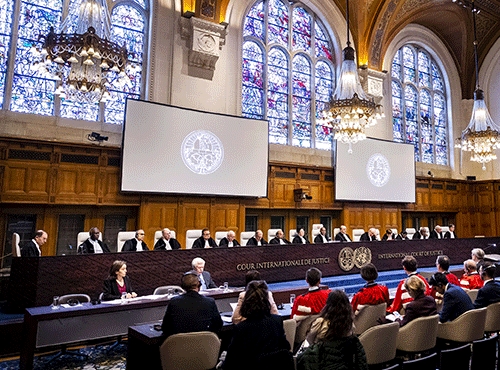 The International Court of Justice at The Hague is presently hearing the application filed by Ukraine against Russia, accusing the latter of “intentionally killing and inflicting serious injury on members of the Ukrainian nationality the actus reus of genocide under Article II of
the Genocide Convention”.

Ukraine had filed the application before the International Court of Justice (ICJ), the principal judicial organ of the United Nations, on February 28, 2022, concerning “a dispute…relating to the interpretation, application and fulfilment of the 1948 Convention on the
Prevention and Punishment of the Crime of Genocide” (the “Genocide Convention”).

“The Russian Federation has falsely claimed that acts of genocide have occurred in the Luhansk and Donetsk areas of Ukraine and on that basis, recognised the so-called ‘Donetsk People’s Republic’ and ‘Luhansk People’s Republic’, and then declared and implemented a ‘special military operation’ against Ukraine”.

Ukraine “emphatically denies” that such genocide has occurred and states that it submitted the Application “to establish that Russia has no
lawful basis to take action in and against Ukraine for the purpose of preventing and punishing any purported genocide.”

In the Application, Ukraine also accuses the Russian Federation of “planning acts of genocide in Ukraine” and contends that Russia “is intentionally killing and inflicting serious injury on members of the Ukrainian nationality the actus reus of genocide under Article II of the Genocide Convention”.

The Applicant sought to found the Court’s jurisdiction on Article 36, paragraph 1, of the Statute of the Court and on Article IX of the Genocide Convention, to which both States are parties.

Pursuant to Article 74 of the Rules of Court, “(a) request for the indication of provisional measures shall have priority over all other cases”.

A Bench of 15 Judges of ICJ, including Justice Dalveer Bhandari, India’s nominee at the ICJ, began hearing in the case at 1440 hrs IST.

The Bench said, “The application submitted by Ukraine on Feb 26 were immediately transmitted to the Govt of Russian Federation and further
communications were sent with the details of the current hearing. By letter dated March 5, 2022, the Russian Ambassador to the Kingdom of
Netherlands indicated that his government does not intend to participate in the present proceedings. The Court regrets the non-appearance
of the Russian Federation in the oral proceedings.”

ICJ expressed regret over Russia’s decision not to participate in the proceedings in the case filed by Ukraine. ICJ President Robert Goldman welcomes the delegation of Ukraine, the agent of Ukraine to present their oral arguments.

Ukraine agent: The Russian President said that the purpose of the war is to protect people from a genocide. This is a horrible lie. Putin lies and Ukrainians, our citizens die. It is not Ukraine which committed genocide. It is Russia and its political leadership and military personnel who commit war crimes and crimes against humanity in the territory of Ukraine. We should recall that in World War II, Ukrainians and Russians stood together to stop evil. I stand here before the Peace Palace but at home, my country faces a war of aggression.

Millions of people back home are in imminent danger. We can no longer provide state services to our citizens or reside in occupied territory, including the administrative services, education, medical services. This is not the first time Ukraine has experienced first hand Russia’s disrespect for international law.

With its false claim of genocide, Russia uses one pillar of the modern international law to destroy the other. By falsely claiming genocide to justify its crimes of aggression and acts of aggression, Russia has defiled the Genocide convention. Ukraine’s case is straightforward.

Russia accuses Ukraine of committing genocide. Ukraine denies that claim in the strongest possible terms. Russia claims that in order to stop a non-existent genocide, it can invade a sovereign state. Ukraine rejects this baseless claim. My message to Russia is, let us resolve
this dispute like civilised nations. Lay down your arms, and put forward your evidence.

If Russia does not return to international law on its own, the Court has the power to Act and also the responsibility to act. Russia consented to your (ICJ’s) jurisdiction under the Genocide convention. Now it is violating that convention to destroy Ukraine. Russia must be stopped and this Court has a duty to stop Russia.

The government of Ukraine, the people of Ukraine, the people of Ukraine ask you respectfully but urgently to grant our request for provisional measures. It is extremely urgent to bring to an end without delay this war perpetrated to prevent an alleged genocide and the punishment launched against Ukraine, its leaders, its people against its very existence by President Vladimir Putin. Some people will say that February 24,
2022 is a back day in the history of the Genocide Convention. Time is one thing we don’t have. That is why Ukraine requests the Court to act swiftly indicating the provisional measures.

The right not to see its population terrorized in the name of the Genocide Convention. These rights claimed by Ukraine are according to the accepted formula at least plausible. We have moved well beyond the risk of “irreparable prejudice” to extreme urgency. The Court may indicate
provisional measures if the provisions relied upon by the Applicant appear prima facie to afford a basis on which its jurisdiction could be founded. But need not satisfy itself in a definitive measure.

Ukraine cites Article IX of the Genocide Convention to contend that the ICJ has jurisdiction to adjudicate the matter. Furthers states that both Russia and Ukraine are parties to the Convention and neither of them have any reservation which is currently in force.

Ukraine argues that at the stage of provisional measures what needs to be checked is the prima facie existence of a dispute relative to the application of the Convention. Relies on the ICJ judgement in Marshall Island vs UK.

Your prima facie jurisdiction to hear this case is beyond doubt. Ukraine is asking you to exercise it by indicating the
provisional measures that it has requested you to order. It is asking you to give substance to the conviction shared by a lot of those who stand here. The dispute over the interpretation, application or the fulfillment of the Genocide Convention between Ukraine and Russia is not just about angry words. It is also forged in iron, in flames, in blood, in screams and tears. Ukraine is resisting. Ukrainian men and women are
suffering. Ukrainian men and women are dying. They could not have demonstrated their dispute with Russia more forcefully.

As for Russia, it could not have been unaware that its views were positively opposed by Ukraine. What Russia could do under Article VIII of the Convention was to call upon the organs of the United Nations. Ukraine cites ICJ judgement in Nicaragua vs US to argue that while each
State makes its own assessment of the human rights situation in a third country, the use of force could not be the appropriate method to monitor or ensure the respect of these rights in the Convention.

Ukraine cites ICJ judgement in Nicaragua vs US to argue that while each State makes its own assessment of the human rights situation in a third country, the use of force could not be the appropriate method to monitor or ensure the respect of these rights in the Convention. Nothing in the Genocide Convention authorises a State to enter by force the territory of another State to prevent or punish genocide.

Ukraine relies upon the International Law Commission’s commentary on the Draft Articles that became the Vienna Convention.

It said indeed, it is an abuse of the rights granted through the Convention by each State party to other State parties. Russia has taken a fundamental peremptory norm of international law codified in one of the most important human rights treaties and turned it into a sharade, it said.