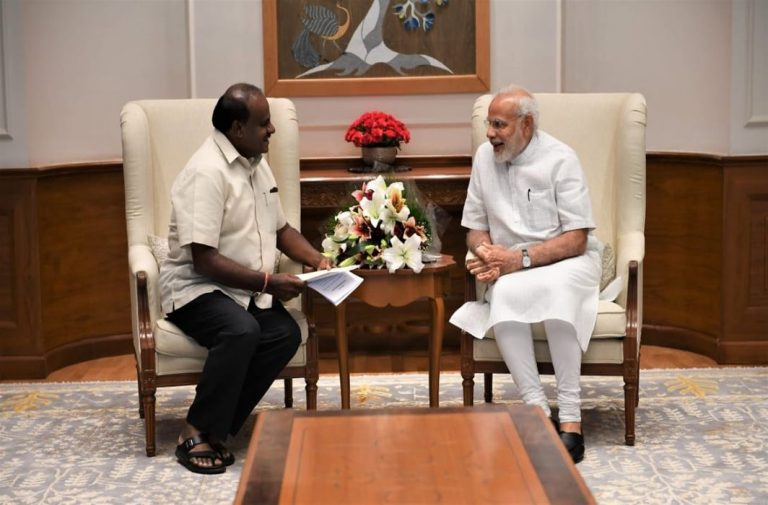 The centre, through the Cauvery Water Management Authority, wants to convey that water is a national asset, but Karnataka’s new CM begs to differ

HD Kumaraswamy may have been both servile and candid in saying, shortly after he took oath, that he was in office at the mercy of Congress president Rahul Gandhi, but in his dealings with the BJP-led centre—who he outsmarted in government formation after last month’s elections—the Karnataka Chief Minister is proving to be a tough negotiator.

The Supreme Court-mandated setting up of Cauvery Water Management Authority (CWMA), where the Centre has a proportionally high representation and decision-making powers on the sharing of waters among the southern states, has run into rough weather. Kumaraswamy is vehemently opposed to many of the Authority’s “guidelines which are unscientific” and the powers vested with it to decide key issues like cropping pattern in the Cauvery basin. He said as much to Prime Minister Narendra Modi and his Cabinet colleagues Nitin Gadkari and Rajnath Singh whom he met during a two-day visit to the capital last week.

“We told the PM that the constitution of the Cauvery Water Management Authority should be first discussed in Parliament to address several technical issues in the SC order,” Kumaraswamy said. He is right now going slow on sending the names for the state representatives on the Authority’s board and is consulting his legal team to whether or not to file a review petition.

The apex court’s hunt for a win-win formula for several years may be the best under the circumstances but the Karnataka chief minister has picked holes in the 14-page draft. His party symbol is a lady farmer carrying paddy on her head and he knows Cauvery is a highly emotive and political hot-button issue where elections can be won or lost.

Kumaraswamy does not want to throw himself at the mercy of the Authority because there are some technical issues/unscientific guidelines in it. For starters, though an independent body, the Centre gets to pack it with majority. Six of the 10-member board will be central nominees: chairman, four members and a secretary. It will pick the chairman, an eminent engineer with nationwide experience, four expert members from the fields of water resources, river development and Ganga rejuvenation, agriculture, farmers’ welfare, and a non-voting secretary above the rank of a chief engineer. States like Karnataka will only send a part-time member, the administrative secretary in charge of water resource department.

Among other things, the Authority gets to supervise the operation of the reservoirs in the Cauvery basin, and regulate water release every 10 days, if not more frequently. The Authority wants to drive home the point to leaders like Kumaraswamy that water cannot be owned by any state, it is a national asset.

One more technical issue Kumaraswamy is battling is that six members of the board in the Authority are enough to form a quorum. Even if there is no quorum, the chairman can hold a meeting with three if the first meeting is postponed for want of quorum. Kumaraswamy thinks this is too much Advantage Centre. He feels that farmers, the traditional supporters of his party, cannot easily make changes in the way they sow and get their feet wet in traditional agricultural system. He is hoping the Centre will go slow.

The Authority is established under the Inter State Water Disputes Act. Most CMs indirectly play politics, lending tacit support to pro-Kannada outfits or sentimental rioters who unleashed violence and xenophobic attacks against Tamils in Karnataka as we saw in 1991.

A good monsoon guarantees a good run. Good rains help it retain its share of waters. As per the latest SC directive, Karnataka can keep 284.75 thousand million cubic feet (TMC) water each month for the next 15 years, 14.75 TMC more than the previous offer; Tamil Nadu has got only 177.25 TMC because it has better ground water. Bengaluru is a big Cauvery water guzzler.

Apart from the politics of the water issue, the main technical glitch that Kumaraswamy is grappling with the Authority is not having a say over releasing of water to the neighbouring states.

If the Centre has so much say, then it has to also liberally pay for the Authority’s upkeep. Apart from a small grant of Rs 2 crore as startup cost for the New Delhi headquartered Authority, the reality is that the southern states will pick up all the tabs, administration and field organisation costs, members’ salaries in the following ratio: Kerala 15 percent; Karnataka 40 percent, Tamil Nadu 40 percent; and Union Territory of Puducherry 5 percent. Politicians like Kumaraswamy also find that the Authority has too much powers, functions and duties related to storage, apportionment, regulation and control of Cauvery waters, supervision of operation of reservoirs and regulation of water releases.

Its micro-management is also a technical glitch: for example, at the beginning of the irrigation season which is June 1 every year, all the party states will be asked to submit an indent for the supplies required by them at each reservoir (capacity 3 TMC and above) for that month broken into ten daily intervals. The Authority can direct party states to furnish data in respect of carry-over storage in reservoirs, including inflows and outflows, rainfall data, the area irrigated and water utilised. The Authority or any of its nominees will have the power to enter upon any land or property upon which any hydraulic structure or measuring device has been or is being constructed, operated or maintained by any agency in the Cauvery basin.

The apex court has planned for the Authority to hit the ground running from June itself, including meeting once in ten days during the months of June and October when the south-west and north-east monsoons set in. But the Authority has the powers to convene meetings as often as necessary, including at just two days’ notice.

With 200 mm rainfall lashing parts of the state, the reservoirs are filling up slowly. But when there is a drought, it is a different story which is why Kumaraswamy does not want the Authority lashing out its unlimited powers at him over sharing the waters of the Cauvery river.