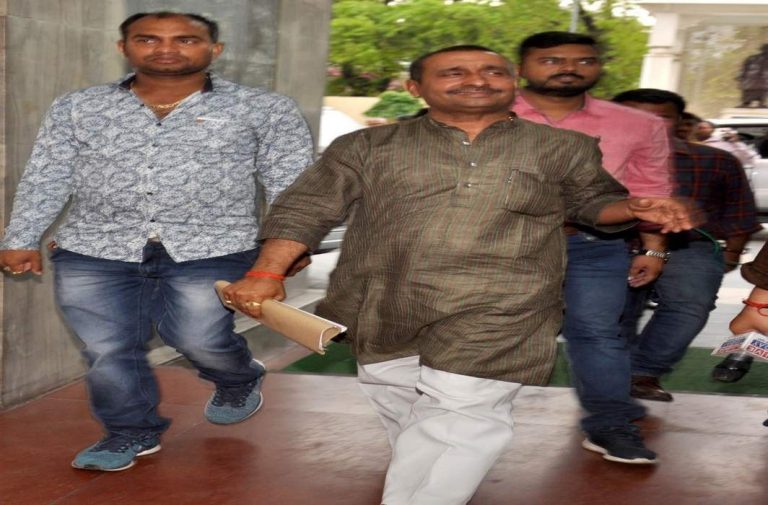 Originally charged with murder, attempt to murder, criminal conspiracy and intimidation, expelled BJP legislator Kuldeep Singh Sengar gets a reprieve as the CBI drops the murder charges against him

By Govind Raju in Lucknow

BJP legislator Kuldeep Singh Sengar, currently in jail facing charges of rape, kidnapping, attempt to murder and murder, might be getting some reprieve soon. The CBI has dropped murder charges against former BJP MLA and his other associates in their first charge sheet in the Unnao rape victim’s accident case in which two of the victim’s relatives died. In its first charge sheet filed in a special CBI court in Lucknow, the CBI has booked Sengar and all other accused named in the FIR under the Indian Penal Code sections for criminal conspiracy and intimidation only. Previously, the CBI in its FIR had registered a case against Sengar and nine others under sections related to criminal conspiracy, murder, attempt to murder and intimidation.

The girl, who had accused Sanger and his accomplices of rape in 2017, was hit by a truck in Rae Bareli while travelling in a car on July 28. Two of the girl’s aunt succumbed in the accident while she and her lawyer were seriously injured. The girl’s family had blamed Sengar in the case and an FIR was registered against Sengar and his nine other accomplices for both murder and attempt to murder. As the matter gained highlight, the Supreme Court took cognizance of the case and directed all the cases related to it be shifted to Delhi while the investigation charge was handed over to the CBI. It was only after the intervention of the Suparam court that the victim and her lawyer were airlifted to Delhi for medical treatment.

The Supreme Court had asked the CBI to complete the investigation of the accident in ten days. The CBI finally submitted the charge sheet on July 30 after seeking three extensions for the same. This charge sheet was filed before a Special Judicial Magistrate in Lucknow and bodes some relief for Sengar. While the truck driver Ashish Kumar Pal has been charged under the sections related to causing death due to negligence and driving recklessly amongst others. Though there has been no charge of criminal conspiracy against him, Ashish Kumar has been charged under sections 304-A, 338 and 279 of IPC while Kuldeep Singh Sengar and other accused have been charged under 120 B.

On June 4, 2017, the girl alleged she was raped by BJP MLA Kuldeep Sengar in his house when she went to meet Sengar along with a neighbour to seek his help in getting a job. A few days later she went missing while her family lodged a police complaint. She was later found in a village in Auraiya and brought back to Unnao. The police produced her before the court on June 22 where her statement was recorded under Section 164 of CrPC. She alleged that the police did not allow her to name Kuldeep Singh Sengar in the statement. Later she starts appealed to chief minister Yogi Adityanath’s office seeking the filing of the rape case against the MLA and his brother Atul Singh. Later the court decided to hear her mother’s plea as her father came down to Unnao with family for the hearing. That same evening, he was allegedly assaulted by Atul Singh and his aides and was handed over to the police, which in turn lodged a case under Section 25 (illegal possession of a firearm. Subsequently, he was sent to jail after a medical examination at the district hospital. By April 8, 2018, the situation became worse as the girl attempted self-immolation at the CM’s residence in Lucknow, demanding FIR against the MLA. While the very next day her father died at the district hospital hours after he was shifted from the district jail. Six policemen are suspended and a magisterial probe was ordered, finally ending with Sengar’s arrest by CBI on April 13.

After the accident case was transferred through a reference from the State government, the CBI had sent a team comprised of forensic experts to examine the scene of the alleged crime. The CBI could not find any clue to the conspiracy even after conducting various tests of drivers and cleaners in the investigation even though a large section of the media had declared the accident as a conspiracy to murder. However, no criminal connection between the accused MLA, the truck owner and the driver and cleaner of the truck could be pieced together with CBI giving clean chit to the truck owner. At the time of the accident, the truck was moving at a high speed. Investigation agencies believe if this was a well-planned and conspicuous accident, the truck should have collided directly with the car so that there was no scope of survival for the people seated in the car. However photographic evidence suggests, the truck was slanting on the road and the car was against its rear. This can occur if the truck may have urgently applied brakes to prevent hitting the car, which caused it to slant on the road with the car collided on its rear. As the car was also at a high speed, it probably caused fatal injuries to the occupants. Secondly, the accident site also does not look hint at the possibility of any conspiracy. If this was a planned, then why would it happen where there were a Dhaba and a crowd as eyewitness’. While the agency has not invoked murder charge against any of the accused, the survivor was recently discharged from the hospital and her lawyer is still too serious to record his statement.

In this case, another point of contention is the age of the victim. The Posco Act (Sexual Offenses Act 2012) had been imposed against all those accused of raping the victim as a minor. However, in the FIR filed on 21 June 2017, her age was stated to be ‘about 17 years’. According to a document signed by the Principal of Virendra Singh Shiksha Niketan Inter College, Makhi, Unnao, submitted by the victim’s family as his age certificate, in June 2017, the victim’s age was only 15 years. The name of the victim’s father is also wrongly recorded in this document. This certificate had also been created only on 21 June 2017. But in the bone x-ray conducted during the victim’s medical treatment, her age was stated to be around nineteen and a half years.

What is true in the rape and accident cases of the victim, who are the perpetrators, are all matters that the court will decide. Whatever the truth may be, it is hard to ignore the state of events that the victim and her family have faced. The state of law and order in the state and the condition of women’s safety and freedom is also something that will hinge on the courts verdict.