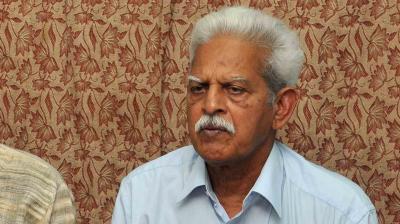 The Supreme Court on Wednesday refused to modify the bail conditions of Varavara Rao, an accused in the Bhima Koregaon case, but gave him permission to approach the Special NIA Court for permission to travel to his native place Hyderabad for health reasons.

Senior Advocate Anand Grover, representing Rao, sought permission from the Apex Court to let the 82-year-old travel to Hyderabad, as he had cataract in both eyes and was in dire need of an operation to remove the same.

A Bench comprising Justice U.U. Lalit, Justice Ravindra Bhat and Justice Sudhanshu Dhulia, while disposing of the SLP, directed Rao to approach the NIA court for the same.

Additional Solicitor General Suryaprakash V. Raju, who happened to be in the court room during the hearing, said Rao did not undergo the surgery earlier, when he was granted three months time for the same.

The Bench replied that it was not easy for an 82-year-old to undergo this surgery, especially when there were co-morbidities involved, such as Diabetes.

The ASG then said that there were hospitals in Mumbai giving free treatment. “Funds are not an issue for him!,” pointed out the ASG.

The ASG requested the court to let him argue the matter.

The Supreme Court said, “Nothing to argue. He had medical conditions.”

The ASG said, “I have seen his photos. He looks younger than 50 years.’

Justice Lalit replied, “You can use that to advertise our prison conditions.”

ASG Raju then said, “I have seen many people improving their health condition after prison term, due to the restricted diet.”

Grover said that Rao was at an advanced stage of 82 years and has been advised cataract surgery in both eyes. He added that medical treatment in Mumbai was expensive and since the petitioner had roots in Hyderabad, his recovery would be better at his native place.

“Instead of this court considering the request, we give the petitioner the liberty to make a representation before the concerned trial court within two weeks with an advance copy to the public prosecutor. The concerned court may consider such appeal and give him relaxation,” observed the Apex Court and set a timeline of three months for the whole process.