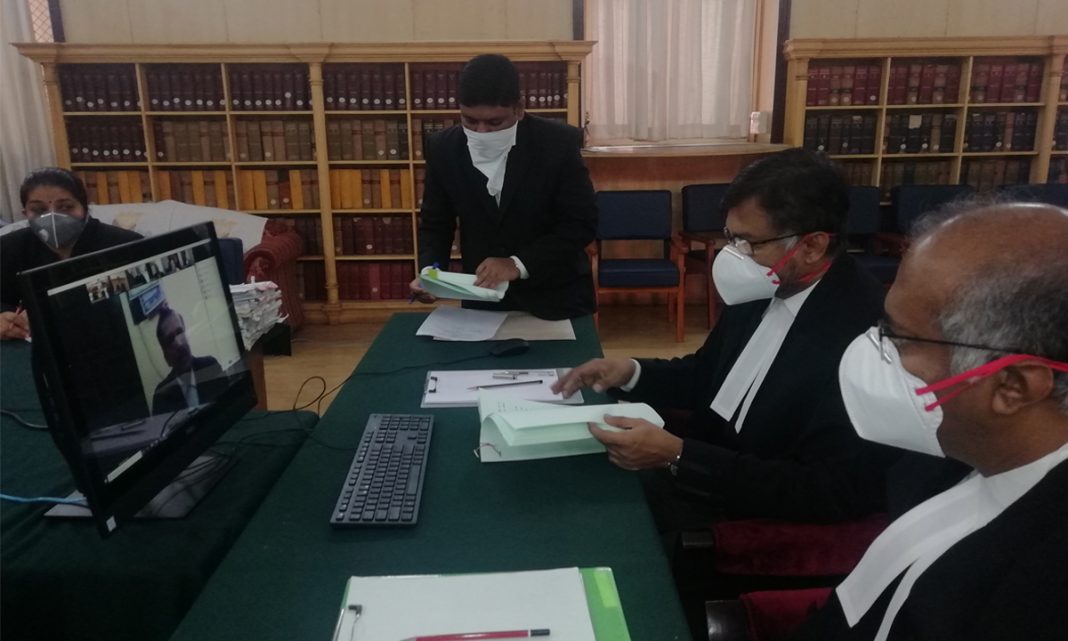 The judiciary is learning to live with the virus and various courts in the country have devised their own innovative ways to deliver justice to litigants.

Even as the world awaits the arrival of a Covid-19 vaccine, the reality is slowly dawning that this deadly virus is likely to stick around for some time, creating havoc. Under these circumstances, how are various courts delivering justice?

While in Delhi, restaurants and cinemas are opening up slowly, the judiciary too is making attempts to ensure the safety and well being of litigants, judges, advocates, visitors and staff. Notices and circulars have been issued by different courts in India, starting with the Supreme Court, with various directions to curb the spread of the virus.

Physical hearing of cases in the apex court was suspended on March 23, 2020. After a period of five months, on August 31, the Court notified a standard operating procedure (SOP) for resuming physical hearing, initially in three courtrooms. However, till date, this has not taken place. Under the circumstances, video-conferencing of cases is going on.

In September, the Court released a user guide for limited physical hearings. The 17 page release provides a user guide for e-nomination of counsel, e-nomination of clerk, e-application for special hearing pass and e-submission of health declaration. According to the guide, registered clerks will be permitted to assist advocates on record or counsel for supplying physical material, but will not be allowed to enter the courtrooms. Multiple passes will have to be generated if appearance is to be marked in more than one case a day as one pass will be required for every item number in the Court. In addition, a self-declaration form about fitness and good health will have to be signed before entering the Court premises. Self-declaration is to be signed by entering the OTP sent on the registered mobile number only on the day of the visit.

In Patna High Court, a new system has been devised as an experiment for hearing cases. Chief Justice Sanjay Karol sat with Justice S Kumar in his chamber during a hearing, while lawyers related to that case were in another courtroom and saw the proceedings through video-conferencing. Similarly, Justices Hemant Kumar Srivastava and Ashutosh Kumar sat in separate courts, while the lawyers attended the hearing of their cases in separate courts.

Under this experiment, the judge will sit in one court and lawyers will argue via video-conferencing in another court. This arrangement was made for lawyers who wanted to come to court and argue instead of from home. At present, only two or three courts will be governed by this arrangement. However, under the earlier video-conferencing process which has been going on due to the pandemic, judges and lawyers will continue to attend the hearing from their homes.

The Delhi High Court too was conducting hearings through video-conferencing since March 24. But from August, an SOP was adopted for resuming physical hearings from September 1. The Court said that five benches will hold the hearings on a rotational basis, while the remaining ones will continue hearing matters virtually. According to the SOP, all advocates, party in person and registered clerks above 65 years and those suffering from co-morbidities have been restrained from appearing in courts. “Persons displaying symptoms of flu, fever, cough, etc, shall not be permitted entry inside the court complex,” according to the SOP.

Entry to the Court blocks for attending physical hearings has been restricted to only one advocate per litigant whose case is listed that day and any senior counsel engaged by the advocate. In case a litigant is pursuing a case without any legal assistance, the party may attend the hearing in person.

However, there had been concerns about having these physical hearings and in September, Senior Advocate Rajiv Nayar wrote to the chief justice of the High Court requesting him to re-examine the sustainability of continuing these hearings due to the continued increase in Covid cases.

The letter ar­gued: “With a deep sense of anguish and pain, I say that the time has come to have a serious re-look at the viability of continuation of these physical hearings, especially keeping in mind the health and safety of the judges, my fellow lawyers, and the staff, whether employed by the court or by lawyers.”

He warned that judges were at the greatest risk as they have not been given an option (like lawyers) to opt for virtual hearing on days when they were designated to sit in a physical court. He re­minded the Court that he had written on August 17 and made a request to continue with and expand virtual hearings in Delhi High Court and subordinate courts.

Nayar also said that he had read media reports about a large number of persons working in the court, including judicial officers, having tested positive for this virus. “This fact itself is sufficient to warrant a re-look at the decision to continue with physical hearings. The system of hearings through video conferencing, which has been put in place, is working wonders and now the time has come to expand the hearings to regular matters as well instead of en bloc adjournments to another date. The courts have adapted well to these systems and now are in a position to take up a large number of matters, if not all, through video conferencing,” he said.

Despite courts notifying time and again about resuming physical hearings and adopting alternative methods to hear the maximum number of cases, with Covid-19 numbers fluctuating in different states, High Courts have had to revisit their guidelines regarding court functioning.

-The author is Advocate, Supreme Court