Foreign lawsuits are increasingly being tried in London. One that has raised eyebrows is of an Egyptian businessman suing a Bahraini Sheikh for $42.5 million for allegedly reneging on a payment due for facilitating meetings with top stars

London has for long been the playground of the jet set and kings and royal families of the Middle East. But now it seems to be the place of choice for civil law suits as many foreigners have more faith in the British judicial system and feel confident of getting justice here rather than in courts back home.

An Egyptian businessman suing a Sheikh from Bahrain for $42.5 million has pleaded with a British court that he would like the trial to take place here and not in Bahrain because he fears manipulation of justice in a country where the defendant is a distant cousin of the king.

Businessman Ahmed Adel Abdallah has accused Sheikh Hamad Isa Ali Al Khalifa of reneging on a deal whereby the former would arrange for the Bollywood-besotted sheikh to meet top Indian film stars in return for a very hefty fee. Ahmed, who describes himself as an “international businessman” and runs a Dubai-based “professional brokering service to wealthy and/or notable individuals” claims that the sheikh had hired him to fix up 15 to 25 minute interactions with Bollywood stars for a fee of $1.5 million per sitting, with a bonus of $0.5 million for every third meeting.

Hamad apparently gave Ahmed a list of 26 Bollywood stars he wanted to meet. However, after Ahmed had facilitated a brief tête-à-tête with Shah Rukh Khan, Salman Khan, Ranveer Singh and Aditya Roy Kapoor, he seemed to have lost interest. He therefore refused to meet any more stars, including two with whom meetings had already been arranged.

The sheikh’s lawyer, Andrew Lenon QC, instructed by law firm Simmons Gleek told the Queen’s Bench Division of the High Court of Justice at the Strand in London that “a meeting with Shah Rukh Khan was arranged and four other meeting with three other stars between January 2016 and March 2016 in India and Dubai for which Ahmed was paid in excess of $3.4 million”. He denied any further payment was due from his client. 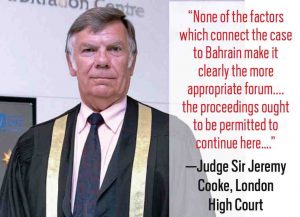 “Although it was understood that Ahmed would be remunerated for his services, there was no agreement on any specific sums and no agreement on exclusivity,” Hamad told the Court. Ahmed apparently refused to disclose to the sheikh how much each meeting was costing him and by April 2016 Ahmed was “making demands for very large sums to arrange further meetings” which he “did not want” and so terminated the authority he had given him. The sheikh also alleged that Ahmed was intimidating him into sponsoring the Dubai Film Festival through his company CBSC Events and Exhibition and Conference Organizers (formerly known as Classic Businessmen Service Centre), which is also the second claimant in the suit.

Ahmed was introduced to Hamad in December 2015 by his uncle, Sheikh Abdulrahman Bin Mubarak, who knew of his nephew’s penchant for Bollywood, at the senior sheikh’s home in Bahrain. Ahmed had told Abdulrahman that he had contacts with Bollywood stars and could arrange meetings with them. It was then that the younger sheikh gave Ahmed his list of favourite actors, but oddly this list was not produced or exhibited in the proceedings in Court by either side.

After a few telephonic discussions between Ahmed and Hamad, the latter gave Ahmed formal notarised instruments to give him credibility in approaching the film stars and their agents. According to Ahmed, suddenly in April 2016, Hamad refused to attend any of the meetings he had set up and instead found another person to introduce him to 13 more Bollywood stars. Ahmed’s counsel, Stephen Nathan QC, instructed by Zaiwalla and Co. claimed his client was deprived of earnings worth $42.5 million for making arrangements for meeting with the remaining 22 film stars on the list.

None of the participants of the suit are British or even domiciled here. The geographical sweep of the case takes in Egypt, Bahrain, Dubai and India with a tangential reference to London. And yet, the demand in this bizarre and extremely expensive law suit is for the case to be heard in England.

Ahmed is an Egyptian national who lives in a serviced apartment in Dubai and holds a Bahraini ID and residency permit. His company is also Dubai-based with a representative office in Bahrain. The court learnt that it was only in July 2016—after the events of the case—that Ahmed has signed a tenancy agreement for a flat in London. He has since created two new companies in London which operate with similar names to the one in Bahrain. From his passport, which Ahmed had initially refused to show the Court, it transpired that since February 2016, he had made 29 trips to London, as well as 15 trips to Bahrain.

On the other hand, Hamad, who is a Bahraini national and domiciled there, spends 2-3 months in London every year. His family own properties in London and until March 2016, he too owned a flat in the heart of the city but sold it as he had no further use for it. The court was told that the sheikh never lived in his London flat but preferred to stay in hotels because of the service provided in them.

Hamad challenged the jurisdiction of London courts and sought a stay on the trial saying that it be tried in courts in Bahrain. QC Lenon contended that “appropriate venue for trying a dispute about agency arrangements agreed orally in Arabic by two individuals based in Bahrain, negotiated at meetings in Bahrain… and governed by Bahrain law, with witnesses living in Bahrain, and which had nothing to do with England or English law, is clearly Bahrain, not England”. Ahmed’s counsel argued that there was a perceived risk of injustice in Bahrain courts as Hamad was a member of the royal family which appoints judges.

The London High Court ruled that though there was “no real risk of injustice” in Bahrain courts, the dispute could be tried in an English court. Sitting Judge Sir Jeremy Cooke who delivered the judgment said: “This is a case where the connections both to England and Bahrain are limited and, because service was effected as of right, within this jurisdiction, the onus is on the Defendant to show that Bahrain is clearly and distinctly the more appropriate forum. That, in my judgment, he cannot do. Whilst the Claimants exaggerate the connections with England and have apparently taken steps since the events in question to increase connections here and reduce them in Bahrain, whilst downplaying the connections with that jurisdiction in the shape of the Defendant’s domicile and the location of the initial conversations which formed part of the alleged contract, none of the factors which connect the case to Bahrain make it clearly the more appropriate forum. In these circumstances, the proceedings ought to be permitted to continue here, without a stay in favour of proceedings to be pursued in the Courts of Bahrain”.

The judge said potential witnesses could include Mr Dallal, Ahmed’s personal assistant, and Mr Bansal, “an Indian businessman involved in the logistics of arranging meetings with stars in India, as well as, more remotely the possibility of evidence from the agents of the Bollywood stars and the stars themselves”, and it would make little difference to most of these witnesses whether they had to travel to London or elsewhere in the Middle East.

The Public Prosecutor, A. Rajesh submitted that according to the provision Section 17A of the Prevention of Corruption Act, 1988, competent authority's previous approval would be necessary for conducting any preliminary investigation by the VACB.
Read more