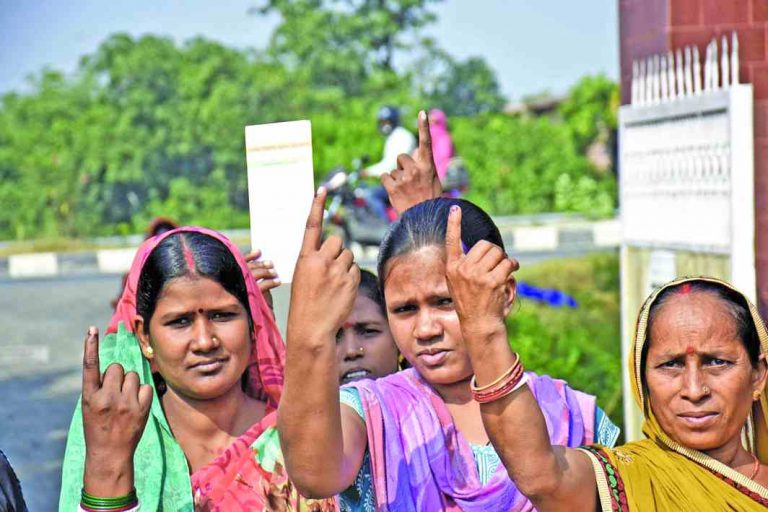 Above: Women show evidence of exercising their right to vote. Photo: UNI

The constitution has conferred Universal Adult Suffrage on every citizen of India and has empowered him/her to play a role in the governance of the country. But what will be the use of this right if the voter thinks that there is no candidate worth voting for? What can be the alternative if he wants to take part in the election, yet wants to reject a candidate? He has the option of “NOTA” (None of the above) where he can show his dissent.

Shailesh Manubhai Parmar, chief whip of the Congress in the Gujarat assembly, filed a petition under Article 32 of the constitution asking for quashing of a circular by the secretary of the assembly to include NOTA option in the Rajya Sabha (RS) election scheduled for August 8. It also wanted the quashing of notifications dated January 24, 2014 and November 12, 2015 issued by the Election Commission (EC) which made the NOTA option available for the RS elections. The petition contends that this is contrary to the provision of Article 80(4), the Representation of the People Act, 1951 and Conduct of Elections Rules, 1961 and the EC cannot introduce it without amending the act and rules. It also contended that the judgment in PUCL v. Union of India allowed the use of NOTA in direct elections and not indirect ones like in the RS. Senior advocate Kapil Sibal, appearing for Parmar, even submitted that “if court doesn’t stay the election, it is a recipe for corruption”.

However, a bench of Justices Dipak Misra, Amitava Roy and AM Khanwilkar declined to give an interim stay on the ground of delay as the challenged notifications were of 2014 and 2015. It posted the matter for hearing on September 13, 2017, when only the constitutional validity of the notification will be taken up. It issued a notice to the EC and asked it to file its reply. Incidentally, this is the first time the NOTA option will be available in the Rajya Sabha elections.

The bench asked the petitioner why he was unsure of his MLAs and questioned why the Congress had not challenged this provision which had been in force since 2014. It said that many elections have since been held but “when it suited you, you did not challenge it”. Six Gujarat MLAs have so far quit the Congress and three of them have joined the BJP.

In actual terms, NOTA does not imply rejection. Even if more than 50 percent voters opt for NOTA, it will not affect the results.

The option to reject all electoral candidates in an election was allowed by a Supreme Court bench headed by Chief Justice P Sathasivam in September 2013 on a PIL filed by an NGO, People’s Union for Civil Liberties. The Supreme Court made two things clear in this judgment. It said the right to vote should also include the right not to vote, ie., the right to reject. Secondly, the right to secrecy is an integral part of a free and fair election which is recognised under Section 79(d) of Representation of the People Act, 1951 and Rules 41(2) & (3) and Rule 49-O of the Conduct of Elections Rules, 1961.

After this judgment, NOTA was introduced in the legislative assembly elections of 2013 held in Madhya Pradesh, Mizoram, Rajasthan, Chhattisgarh and Delhi and constituted 1.85 percent of total votes. This came down to 0.95 percent in the 2014 assembly elections in J&K, Maharashtra, Arunachal Pradesh, Andhra, Haryana, Jharkhand, Odisha and Sikkim. In the 16th Lok Sabha elections, about 60 lakh NOTA votes were cast. This was 1.1 percent of the total votes polled across 543 seats.

The reason why NOTA is used by the electorate are many:

However, there are some negatives as well:

In a democracy, a citizen should be allowed to cast his vote as he/she wants to, but at the same time, should not be compelled to do so. Introducing NOTA may be called a great reform, but it can achieve its objective only if it is seen as the right to reject and not only as a negative vote.