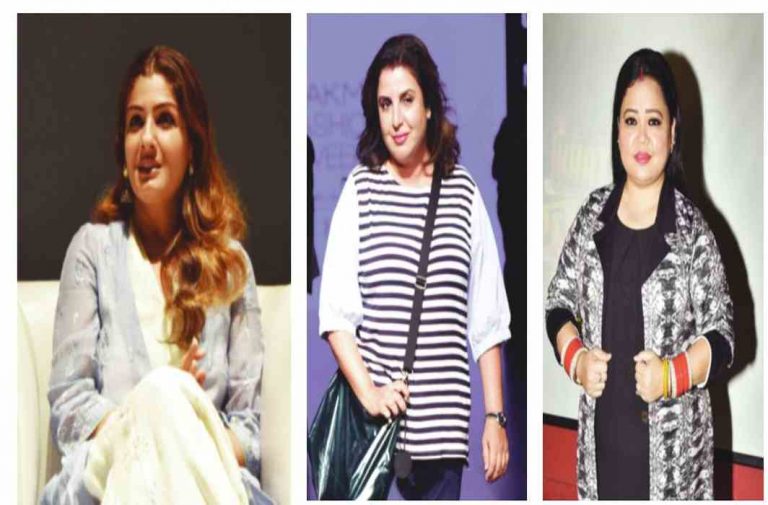 Three cases have been lodged against Bollywood personalities Raveena Tandon, Farah Khan and Bharti Singh for allegedly hurting the religious sentiments of a community on a TV show

The rendezvous of Bollywood stars with law violations appears to be on the rise. While one rarely heard of any old time mega star being hauled up for allegedly violating the law or hurting the sentiments of any community, such reports are now coming in with increasing regularity.

Superstar Salman Khan could top the list with stiff competition from Sanjay Dutt, but several other stars have been making an appearance in courts and police stations. Many, however, rush to resolve the issue at the first sign of trouble. The latest in the series is the controversy involving Bollywood actor Raveena Tandon, filmmaker Farah Khan and comedian Bharti Singh for allegedly hurting the religious sentiments of a community during a comedy show.

The Amritsar police lodged a case against them on the basis of a complaint by Sonu Jafar, president of the Christian Front of Ajnala Block, along with video footage of the show that was aired on Christmas Eve. The complainant alleged that “the religious sentiments of Christians have been hurt” by certain references made by them on the show.

Shortly after that, another complaint was booked against the three on charges under Section 295-A (deliberate and malicious acts intended to outrage religious feelings of any class by insulting its religion and religious beliefs). This was registered on a complaint from the chairman of Samson Brigade Christian Youths, Vijay Goria, a resident of Kamboj Nagar in Ferozepur. He said the three had allegedly made fun of the word “Hallelujah” while trying to pronounce it.

The trio was slapped with a third case for the same alleged offence on the complaint of Ashish Shinde, who heads an NGO in Maharashtra’s Beed district. The case was transferred to Malad police station in Mumbai where the three accused live.

Evidently rattled by the spate of cases, Tandon and Khan took to Twitter to offer apologies. “Please do watch this link. I haven’t said a word that can be interpreted as an insult to any religion. The three of us (Farah Khan, Bharti Singh and I) never intended to offend anyone, but in case we did, my most sincere apologies to those who were hurt,” said Tandon in a tweet while sharing a clip of the programme. YouTube has, however, blocked the video. Khan too tweeted: “I respect all religions, and it would never be my intention to disrespect any. On behalf of the entire team, Raveena Tandon, Bharti Singh and myself…. we do sincerely apologise.”

While these three may have found themselves in a mess unintentionally, there are others who invite trouble to stay in the headlines. A week prior to the registration of cases against the three, another actress and former Big Boss contestant Payal Rohatgi was involved in a controversy. She uploaded her own video which contained derogatory references to the Gandhi family, including Motilal Nehru, Jawaharlal Nehru, Indira Gandhi and other members of the family. She was picked up and sent to judicial custody for eight days. Her lawyers took up the case in higher courts and she was bailed out the next day but the proceedings against her will continue.

While she has been courting trouble, some like Salman have been casual about following the law. A Mumbai court in 2018 stayed a bailable warrant issued against him in a 2002 hit-and-run case, in which the government’s appeal against his acquittal is pending before the Supreme Court. He was accused of running his car over some persons sleeping on the pavement in Bandra. One person died. The trial court awarded him a five-year jail term.

Salman is also facing a criminal case for killing two blackbuck in Rajasthan. These animals are revered by the local Bishnoi community. The shooting took place in 1998 when he was with fellow actors Saif Ali Khan, Tabu and Sonali Bendre during the shoot of the film Hum Saath Saath Hain. He was sentenced to five years’ imprisonment in 2018 and appealed to a higher court for reversal of the trial court order.

But apart from his personal forays with the law, Salman also has his share of controversies relating to hurting religious sentiments. A film produced by him, and initially named Loveyatri, attracted protests from Hindu outfits who said it was an insult to the sacred festival of Navratri. Even the name change did not appease the protesters who lodged a complaint against him and six others at Meethanpur police station in Muzaffarpur on charges of hurting the sentiments of Hindus. The complaint was filed by them under Sections 295 (injuring or defiling place of worship), 298 (uttering words with deliberate attempt to hurt religious sentiments), 153 (provoking with intent to cause riots), 153 (B) (assertions prejudical to national integrity) and 120(B) (criminal conspiracy) of the IPC.

Considering that a section of Indians is sensitive to religious sentiments (and there is no dearth of those who file cases merely for attracting attention and garnering publicity), Tandon, Khan and Singh should have been more circumspect, even though they might have taken the joke too far. They are now making all attempts to get out of the sticky situation. They met Cardinal Oswald Gracias, the archbishop of Bombay. After the meeting, Khan tweeted: “His Eminence Cardinal met us. We apologised and asked him to forgive our mistakes and he very graciously accepted our apology.”

Cardinal Gracias said in a statement: “As also reported in the media, director-choreographer Farah Khan and actor Raveena Tandon met me to convey their AOL apologies over the ‘Backbencher’ web show. They expressed their unqualified apologies for hurting the sentiments of the Christian community. Comedian Bharti Singh, who is out of country, sent an apology on an audio clip. They also handed me a written apology. It is regrettable that the prayer of praise was treated so disrespectfully. I was told this was due to ignorance. I accepted their sincere apologies and prayed with them. I was assured that they will be very careful in the future. The Christmas season is one of joy, peace and reconciliation. With these sentiments, I closed the matter.”

Hopefully, Bollywood stars and other opinion leaders will be more circumspect and the general public more tolerant in the new year.