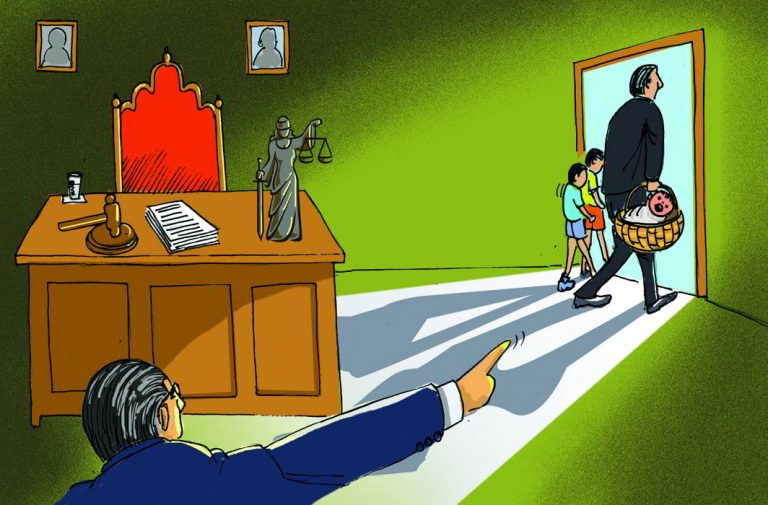 While the services of two judges have been terminated for violating the two-child norm, there are allegations that many more such violators are serving the state

When lawyers Ashraf Ali and Manoj Kumar were selected in May this year as additional district judges (trainee) by the Madhya Pradesh government through lateral entry, they would not have expected that their services would be short-lived. But that is what happened, as within two months of their posting, the administrative committee of the Madhya Pradesh High Court declared them ineligible for the job and recommended their dismissal. The judges had flouted the two-child rule that makes state government employees ineligible for service if their third child is born after January 26, 2001. Manoj Kumar was posted in Gwalior and Ashraf Ali in Jabalpur.

The committee in its meeting in July had recommended to its full bench the termination of the service of these trainee judges under Rule 9C of the Madhya Pradesh Higher Judicial Service (Recruitment and Condition of Service) Rules, 1994. In 2000, the rules were amended to bring in the two-child policy. The amended Rule 6(5) thus states:

“A candidate shall be eligible for appointment only when, as per amendment brought about by the Government of Rule 6 of Madhya Pradesh Civil Services (General Conditions of Service) Rules 1961, dated 10-03-2000.

(b) The candidate doesn’t have a third offspring after 26th of January 2001.”

And on July 26, the full bench of the Court presided by the chief justice endorsed the administrative committee’s recommendation. The matter was forwarded to the law and legislative affairs department for action.

After terminating the services of the trainee judges, the department issued a gazette notification quoting sub rules 5 and 6 of Madhya Pradesh Civil Services (General Condition of Service) Rules, 1961, that say trainees are not eligible for service or recruitment if they have more than two living children, one of whom is born after January 26, 2001.

The Court, in turn, referred the matter to the administrative committee.

When India Legal sought his reaction, Kumar declined to comment. A lawyer from Ghaziabad, he intends to resume his legal practice, according to sources close to him.

Ashraf Ali, the second dismissed judge, had allegedly concealed information about his third child born after January 26, 2001. The High Court received an anonymous complaint about Ali having three children. Ali was unavailable for comment.

This is the first time that the MP government has dismissed judges for flouting the two-child policy since it came into force 16 years ago. Although the administrative committee had recommended the judges’ termination in July, the law department dilly-dallied in accepting the recommendation. Action against them swiftly followed after a suspended additional district judge, RK Srivas, wrote a letter to the President of India on September 10. In his letter, Srivas alleged that at least 15 additional district judges in Madhya Pradesh had flouted the two-child policy but neither the MP High Court nor the state government had taken any action against them.

Srivas had created a scene in the Madhya Pradesh High Court principal bench in Jabalpur by sitting on dharna in front of the court premises in July. He alleged that the Court was victimising him by transferring him frequently for highlighting injustice in the judiciary. The High Court subsequently suspended him for gross indiscipline.

Srivas alleged that at least 15 additional district judges in MP had flouted the two-child policy but neither the MP High Court nor the state government had acted.

Undeterred, Srivas later drove a bicycle from Neemuch, where he was posted, to Jabalpur to highlight his demands. He also wrote a five-page letter addressed to the president, the prime minister and the chief justice of India. One of the 12 points he raised in the memorandum highlighting “injustice prevalent in the MP high court” was violation of the two-child policy by judges. Incidentally, the previous case of termination of government employees in the state for violating two-child policy also pertains to the lower judiciary.

Three peons, posted at Damoh district court, were sacked on the charge of violating the two-child norm. Citing Section 6(6) of MP Civil Services Rules, 1961, district and session judge Anjuli Palo sacked the three—Kalyan Singh Thakur, Chanda Thakur and Lalchand Burman—on June 23, 2016. The sacked peons too had demanded a similar inquiry across the state. They alleged that if a similar inquiry was held across the state, lakhs of government employees would be found violating the two-child norm.

Sources in the law department admit that there might indeed be many violators of this norm. “Now that judges have been terminated, similar complaints are likely to pour in against others who have had a third child after January 26, 2001.

The action is likely to open “a can of worms,” said a senior officer in the law department.