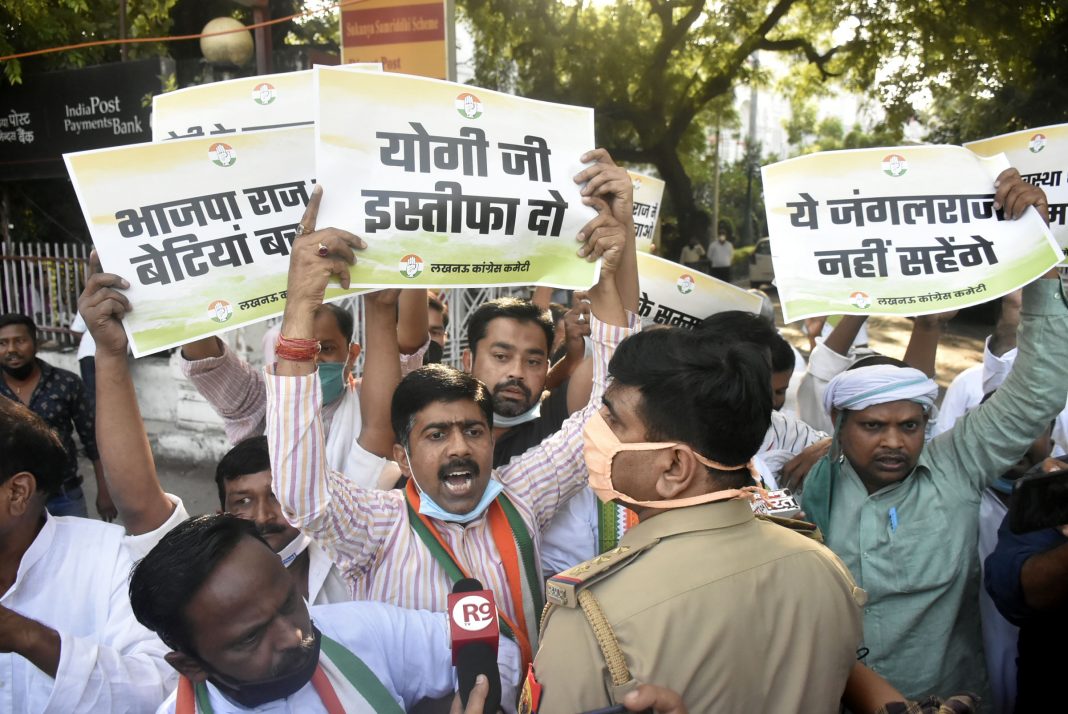 While the gangrape and death of a young woman in UP shocked the nation, what numbed it was the heartlessness of the police which cremated her in the dead of night and claimed that she hadn’t even been raped.

Some eight years after the Nirbhaya case shook India’s conscience, the gangrape of a 19-year-old Dalit woman in Hathras district of Uttar Pradesh on September 14, 2020, by four upper caste men triggered shock and outrage across the country. While newspapers were awash with the march by Rahul Gandhi and Priyanka Gandhi Vadra to Hathras and their inability to do so in the face of police muscle, the issue is yet to see mass political action.

The Hathras case exploded in the news in the last week of September when the mother of the Dalit woman found her in the fields on September 22. She was lying in a pool of blood, paralysed. Some reports said she was naked, her tongue had been slashed and that her spinal cord severely injured. The woman had gone missing on September 14 when the family had set out to cut grass in a field. The mother, who was hard of hearing, and the daughter got separated as they were cutting grass in different parts of the field. The family looked for her but couldn’t find her. She was eventually found and recounted that she had been forced into a bajra field by four upper-caste men and gangraped and dragged by a dupatta tied around her neck.

The victim was then admitted to Jawaharlal Nehru Medical College and Hospital in Aligarh where she struggled for some two weeks. With no sign of improvement, she was referred to Delhi’s All India Institute of Medical Sciences. But the victim was admitted to the nearby Safdarjung Hospital on September 28. She died in the wee hours of the next day.

By then, social media was on fire. The UP police added fuel to fire when the body was taken back to Hathras and cremated at an ungodly hour without the family. The family claimed that they were not informed about the cremation and had wanted the funeral rites to be carried out the next day. The police say otherwise.

Worse was to come. On the basis of an autopsy done at Safdarjung Hospital on September 29, UP ADG Law and Order Prashant Kumar said that as medical investigators did not find any semen inside the victim’s body, rape did not occur. This led to scorn being poured on the police.

Congress leader Supriya Shrinate slammed Kumar and citing the IPC and a Supreme Court verdict, said that the “law on the definition of rape was amended in 2013” and “perhaps the ADG was still referring to the laws he studied 30 years ago”. She added that the “SC verdict in the State of UP vs Babulnath 1994 clearly states that no semen or penis penetration is needed to establish rape. An attempt to penetrate is also rape”. Further, a video of the district magistrate telling the family to be aware that media presence is short-lived was interpreted as a threat to them to withdraw the case.

This is not to say that rapes have gone unnoticed. Almost every year since 2012 there has been some horrific rape the 2013 Mumbai gangrape, the 2015 Ranaghat case, the 2016 Delta Meghwal rape case, the 2017 Unnao rape case, the 2018 Kathua rape case and the 2019 Hyderabad gangrape case.

The central government has got the Uttar Pradesh government of Yogi Adityanath to institute an SIT probe into the incident. The Allahabad High Court too has taken suo motu cognisance of the hurried cremation of the victim by the state police. But the government is not taking any chances and even a small gathering at Delhi’s India Gate was banned after activists tried to take out a protest there on September 30 and outside Malcha Marg police station in the capital.

The gruesome gangrape and death of the victim was also a chance for the Congress to put the Yogi government on the mat. Uttar Pradesh has seen increasing rapes of minors over the last few months, including at least three such cases in Lakhimpur Kheri district. Rahul Gandhi and party’s UP general secretary Priyanka Gandhi Vadra set out to meet the Hathras victim’s family. The government, sensitive to further opposition criticism, blocked the two and their entourage just ahead of Pari Chowk on the Yamuna Expressway. The UP police tried to hold back the Congress leaders, who then started walking, leading to a push and shove and Rahul falling. He chose not to make an issue of the police action. The two Gandhi siblings were then returned to Delhi by the UP police. Similarly, Bhim Army chief Chandrashekhar Azad, who was heading to Hathras, was picked up at Aligarh on September 30 and is under house arrest in Saharanpur.

Ahead of the Opposition seizing the opportunity, the Yogi Adityanath government had announced a sum of Rs 25 lakh compensation, a house for the family and a government job to one member. Despite all these attempts to mollify the aggrieved family, the fact remains that India still has no safe place for its daughters after Nirbhaya and the Hathras cases. Slogans such as Beti Bachao Beti Padhao will be meaningless as long as India’s daughters are not safe.

There have been more cases after Hathras which are getting attention, one in Balrampur and another in Bhadohi where the victims were raped and killed. Since the Hathras gangrape has a caste angle, a sustained demand for justice has the potential to gain critical mass ahead of the elections to the Uttar Pradesh assembly due in 2022.