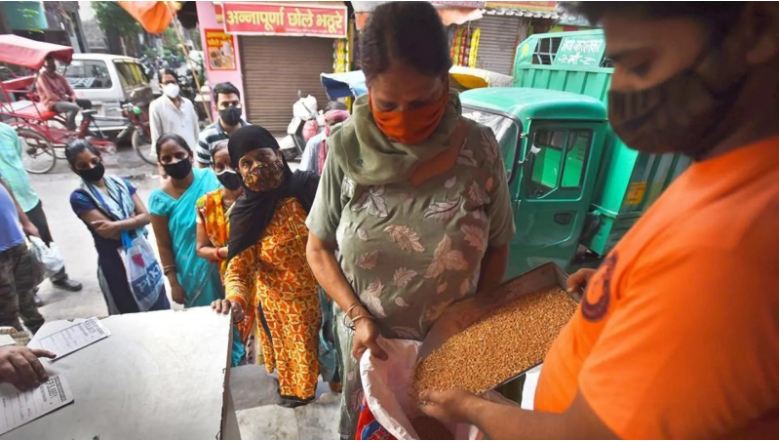 The Delhi Sarkari Ration Dealers Sangh had filed a plea before the Delhi High Court challenging the door­step ration delivery scheme or the Mukhya Mantri Ghar Ghar Ration Yojana, touted by the Aam Aadmi Party (AAP) as a visionary policy of Delhi Chief Minister Arvind Kejriwal. They contended that the scheme is “ultra vires” (beyond one’s legal power or authority).

A Division Bench of Acting Chief Justice Vipin Sanghi and Justice Jasmeet Singh passed the verdict responding to the shop owners’ plea, saying that any such scheme framed by the Government of National Capital Territory of Delhi should comply with all the requirements of the National Food Security Act (NFSA). The view of the Court was that the government is entitled to frame a scheme for the doorstep delivery of foodgrains or rations to the beneficiaries under the Targeted Public Distribution System (TPDS), but it has to be done from its own resources in compliance with prevailing laws.

The Court order said: “The Council of Ministers headed by the Chief Minister is bound to communicate its decisions/resolutions, including any such scheme or proposal to the Lieutenant Governor, so as to enable him to examine the same and to take a call on whether, or not, he has a difference of opinion with any such scheme.” The scheme was introduced in 2018, but could not be implemented due to a difference of opinion between the government and lieutenant governor.

While the scheme was set to be launched in March 2021, the provisions in the bill had become a contentious issue among the political parties. The argument was that the Delhi government had called it the “Mukhya Mantri Ghar Ghar Ration Yojana.” Days before its first scheduled launch, the Union Ministry of Consumer Affairs objected to the “Mukhya Mantri” part of the name. The issue revolved around the fact that Kejriwal’s state-specific food delivery scheme, which includes door­step delivery of packaged wheat flour, rice and sugar contested with the central government’s Antyodaya Anna Yojana (AAY) and Priority Household (PHH) categories of the NFSA Act.

The High Court further noted that the Delhi government scheme does not comply with the provisions of the NFSA and TPDS Order, 2015. The Court also said that as the scheme was not approved by the lieutenant governor, it cannot be implemented in its present form. Delhi’s former Lieutenant Governor Anil Baijal had not given a green signal to the scheme and returned it for reconsideration.

The Delhi government, while supporting the scheme, had argued that “politics has taken over public interest” and termed the objections against it a “camouflage” and “egotistic”. Terming it a progressive scheme, Senior Advocate Abhishek Manu Singhvi appearing for the government had said there was no explicit prohibition against it under the NFSA. “The scheme is optional in nature, and the people may opt for either home delivery of ration, or they may take ration from FPS,” the Delhi government told the Court.

NGO Bandhua Mukti Morcha, which had sought impleadment in the case, through its counsel Talha Rahman, had argued that requiring a person to stand in queue at the ration shop for receiving, what the law regards as his or her entitlement, is against the right to dignity and privacy. On this, the Court observed that it does not offend the right to dignity and privacy of any person, merely because the person may be required to queue up at the outlet. The outlet could be for anything, or for any service. People queue up to buy medicines from a medical store; to buy milk at the milk booth; bus, train and airline tickets at bus stations, railway stations and airports; to buy cinema tickets at cinema houses; to buy tickets for sporting and other entertainment events at the venues, so on and so forth.

The centre, while supporting the petitions, had argued that fair price shop owners form an integral part of NFSA and the scheme mitigates the architecture of the Act. “The state governments are at liberty to provide any other welfare-based entitlements, without disturbing or destroying the mandate of the NFSA,” Additional Solicitor General Aishwarya Bhati argued.

The central government had already maintained that subsidised foodgrains allotted under NFSA are not permissible to be used for the state government scheme. The centre also said that subsidised foodgrains allotted by it under the NFSA can’t be used in a scheme with a different name. Any changes/ amendments in the provisions of the Act, including nomenclatures used for distribution of NFSA foodgrains, can only be done through established parliamentary procedures.

Furthermore, the Union Ministry of Consumer Affairs, Food and Public Distribution pointed out that provision for household delivery of rations does not exist in NFSA 2013.

Last year, in October, Development of Food and Public Distribution (DFPD) had filed a special leave petition in the Supreme Court against the interim orders of the Delhi High Court which had allowed doorstep delivery of ration on a temporary basis. DFPD objected to the implementation of the Mukhya Mantri Ghar Ghar Ration Yojana, saying it would adversely impact numerous NFSA 2013 beneficiaries. It clarified that doing so will thereby create an opaque parallel scheme and will also affect the implementation of the One Nation One Ration Card plan in Delhi.

On November 15, the apex court had declined to entertain a petition by the centre and another by FPS owners against the Delhi High court’s interim order. However, in the latest ruling, the Court has now asked AAP to stop the scheme. The running battle between the central government and AAP has now acquired a legal dimension.