In a velvet glove approach, Bihar has now allowed drinkers a chance to escape jail term. The relaxation was introduced to bring down the number of people crowding jails on this count. 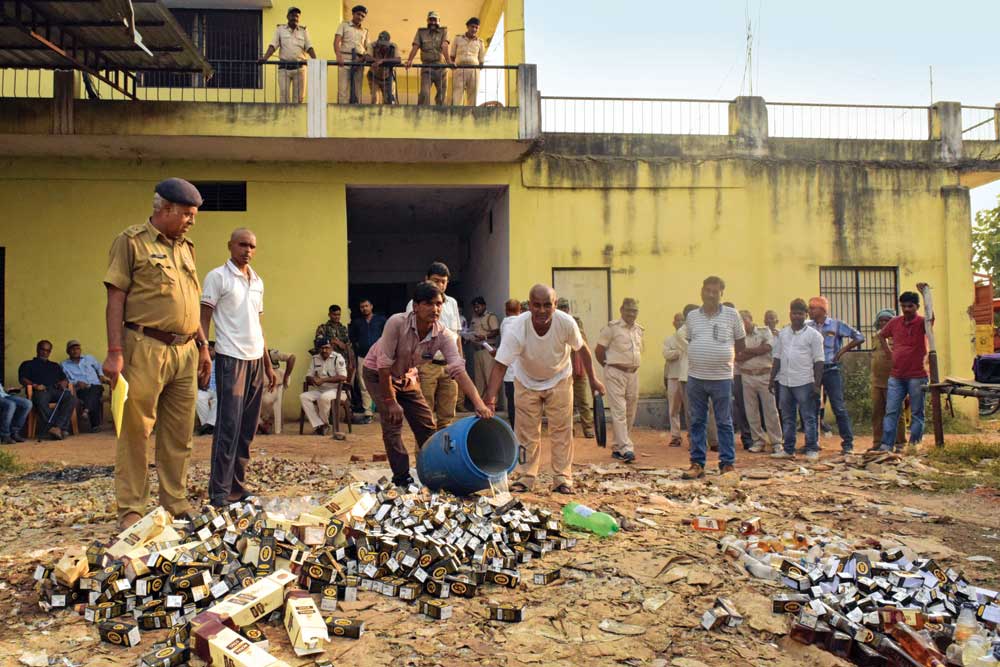 In the dry state of Bihar, those caught drunk now have a chance to escape jail term. Under the state government’s new order, the police will not send those caught drinking alcohol to jail if the offender spills the beans on their suppliers.

Krishna Kumar, Deputy Commissioner of Excise, reportedly said that this “relief” was given with the intention of cracking down on the network and gang of liquor smugglers. He stated that if a person is caught under the influence of alcohol, he will be asked to name and address the person who supplied him the liquor. On the basis of his information, raids will be conducted and if the information is found to be correct, then the man who gives the information will not be punished.

He also said: “We have been asked to spread the word so that we can crack down on liquor traders. We aim at fighting drinking, a social evil, and would give relief to those who cooperate with us. On a possible backlash from liquor traders there is police for security.”

The excise joint commissioner said that over three lakh people have been booked only for drinking and many of them are in jail. “We need to stop overcrowding jails and give legal relief to those who cooperate with us in tracking liquor traders.”

According to government sources, first-time “drinkers” can get away with a penalty rather than face arrest; cases can be withdrawn; a vehicle in which liquor is found may no longer be confiscated and, if it is, can be released after a fine and a section dealing with “immediate” arrest may be deleted.

Nitish Kumar, chief minister of Bihar, has been trying to make prohibition effective through public meetings and equipping police personnel involved in the crackdown on violators with high-end resources like helicopters, drones, satellite phones, motorboats and sniffer dogs. The sale and consumption of alcohol were completely banned by the government in April 2016, a year after the chief minister made a promise to the women of the state who complained about growing drunkenness.

The Bihar Prohibition and Excise Act, 2016, declared the state a dry one in April that year. The government has been facing criticism over frequent hooch tragedies, mounting legal cases and huge pendency related to the prohibition law.

On September 30, 2016, the Patna High Court ruled that the ban is “illegal, impractical and unconstitutional”. On October 3, 2016, the Bihar government approached the Supreme Court challenging the High Court order. The Supreme Court bench, headed by then Chief Justice of India TS Thakur, agreed to give an urgent hearing on the matter, and on October 7, 2016, much to the relief of the state government, the bench stayed the High Court order. “Ban on liquor and fundamental rights do not go together,” the bench said.

In 2021, more than 40 people had died after consuming spurious liquor in Gopalganj, West Champaran, Samastipur and Vaishali districts of the state. Police records say over 3.5 lakh cases have been lodged and over four lakh arrests made under the stringent prohibition laws till December 2021.

Over the past five years, the Bihar government has put in measures like integrated check posts to stop the movement of liquor within the state. According to the National Family Health Survey (NFHS) 2015-16, 29% of Bihar’s population used to consume alcohol. This number has declined to 15.5%, according to the NFHS 2019-20. Data from the National Crime Records Bureau show that cases of domestic violence have fallen to 2,397 in 2019 from 3,792 in 2015. The state government claimed it happened due to the prohibition law.

As per Bihar’s police records, until October last year, 3,48,170 cases were lodged and 4,01,855 arrests made under the Bihar Prohibition and Excise law and about 20,000 bail pleas in such cases were pending disposal either in the High Court or district courts.

On December 26 last year, Chief Justice of India NV Ramana cited the prohibition law in Bihar as an example of “lack of foresight” in drafting legislations that eventually ended up adding a flood of preventable suits in already overwhelmed courts.

In 2019, alarmed by the growing pendency, the Patna High Court had asked the state government to present a plan on how it would dispose of these cases related to excise. Last year, for greater clarity with regard to implementation of the stringent prohibition law and to reduce the growing number of litigations, the state cabinet gave its nod to the Bihar Prohibition and Excise Rules, 2021.

When India gained Independence, prohibition was included in the Directive Principles of the Constitution and the governments of several states introduced it. Since then, the number of states where alcohol is prohibited has reduced. It is currently in force in Bihar, Gujarat, Mizoram and Nagaland. All other Indian states and Union Territories permit the sale of alcohol.

Recently, the Supreme Court raised questions on the increasing number of cases in courts due to the prohibition of liquor in Bihar. The Court asked the Bihar government whether before implementing this law, it had seen whether the court structure was ready for this or not and what steps had been taken to increase the number of courts and judges. Hearing the petition of Sudhir Kumar Yadav alias Sudhir Singh, an accused who violated the prohibition law, a bench of Justices Sanjay Kishan Kaul and MM Sundresh said that such cases from Bihar are continuously coming to the Supreme Court.

Refusal of bail in such cases will increase the crowd in jails. There are a large number of cases related to the prohibition law in the lower courts of the state. There have even been occasions when 16 judges of the Patna High Court have had to hear bail matters related to this law.

The Court said that a government is expected to look into all aspects while making a law. It also asked whether the Bihar government will add the provision of plea bargaining in this law? Plea bargaining is a legal provision in which an accused admits to the charges against him before a judge. Due to this, the court gives him some concession in punishment.