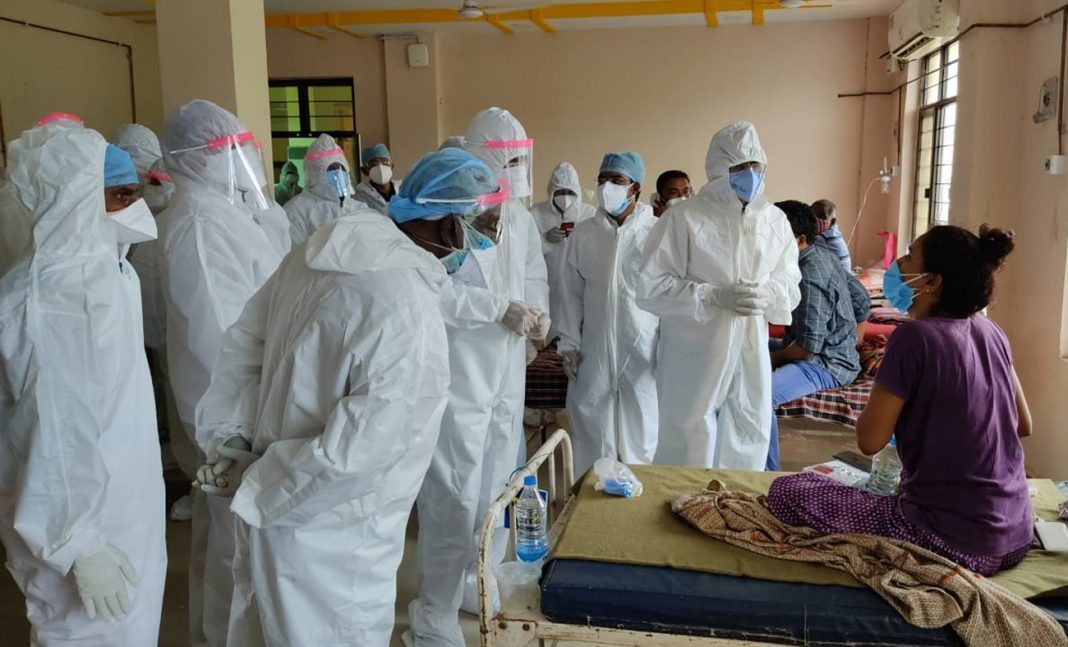 There is a sense of grief and disappointment among doctors that despite risking their lives, the centre doesn’t even have data of the frontline workers who died valiantly treating coronavirus patients.

Doctors, paramedics and healthcare staff have held the frontline against the coronavirus pandemic the world over. In India, they faced many non-virus challenges too shortage of PPE kits, lack of governmental will and policy, hostile neighbours, being cut off from their families while going about their work with dedication and putting their lives at great risk.

India has the second largest number of infections behind the US. As of November 11, 2020, India had 86.36 lakh cases with 1.28 lakh deaths, according to the WHO. The government paid a token tribute to the frontline warriors early on in the pandemic by showering them with flowers and then by clanking thaalis and lighting diyas. But surely that is not enough.

“One of the problems was wearing PPE kits for hours, with faces covered with two masks in temperatures more than 40 degrees. Some of the medical workers were even forced to wear raincoats and motorbike helmets due to shortage of protective health gear.”

He said that the pandemic had completely exposed the medical infrastructure, which was not robust even 70 years after Independence. The only states which were better equipped were Kerala, which tackled the situation very well during the initial phases, and Maharashtra, which later became a victim of lack of execution. Gujarat and Tamil Nadu also have better primary and secondary care, he said.

The urban-rural divide was also an obstacle. Ventilators were imported and people trained to handle them, but these were limited to big cities. This resulted in the deaths of more doctors and healthcare workers in Tier II and Tier III cities in Tamil Nadu, Bihar and Uttar Pradesh because they were not equipped to deal with the disease and the infrastructure was weak. “Even today, a thousand doctors must have been admitted in hospitals across the country,” he said.

The central government has refused to provide data of the number of doctors, paramedics and other healthcare staff who died during Covid-19 duty. Ashwini Choubey, the minister of state for health, had told the Lok Sabha:

“Data on the number of healthcare workers who are infected by Covid-19 or number of doctors and paramedics who lost lives during Covid duty is not maintained at the central level by the ministry of health.”

He, however, said data is maintained for healthcare workers who sought relief under the Pradhan Mantri Garib Kalyan Insurance Package for Health Workers Fighting Covid-19. The scheme offers an insurance cover of Rs 50 lakh in case of death. As per a report on October 6, the health ministry said claims for 95 cases of death have been paid, while some 180 cases are under process.

Disappointed with the health ministry, the IMA published a list of 382 doctors who died while on Covid-19 duty. The healthcare body slammed the government for saying it didn’t maintain data on the number of doctors who died while treating corona patients. “If the government doesn’t maintain the statistics of the total number of doctors and healthcare workers infected by Covid-19 and the statistics of how many of them sacrificed their life due to the pandemic, it loses the moral authority to administer the Epidemic Act 1897 and the Disaster Management Act,” the statement said.

In its second list, the IMA said 515 doctors had succumbed to the coronavirus while treating these patients. “The number could actually be much higher,” Dr Rajan Sharma, the IMA president, said. Aggarwal said that 640 doctors had died so far, among which 385 were general practitioners.

Doctors have reason to worry as infections are increasing greatly and this would directly affect them. Some eight months after the first lockdown in end March, people’s fear of catching the virus has nearly disappeared. “Almost 60 percent of those out in public do not wear masks. For instance, the Bihar election rallies and victory celebrations were held without social distancing measures and sans masks. The government should impose strict measures and take stringent action against violators,” said Aggarwal.

Additionally, doctors allege that the government wants to keep the number of cases low. “Even when people are dying of organ failures, their deaths are being blamed on corona doctors for not treating them properly. Corona positive patients who have become negative but later died of complications cannot be treated as virus related fatalities,” Aggarwal explained.

Another bug bear is doctors not being paid their salaries on time. In Delhi’s Hindu Rao Hospital, doctors have been unpaid from July, and the medical staff is on strike. But the doctors’ suffering was politicised and made into a BJP vs AAP issue. Aggarwal added that the health ministry was neglecting every promise it had made.

“The kin of doctors who died have not been given compensation. Prime Minister Narendra Modi said every death will be compensated, but the centre has refused to provide data of doctors’ deaths due to corona. If the health ministry says it doesn’t have data, I feel ashamed of them. What is the point of clanking thaalis and showering health officials with flowers when you don’t even know who is doing what? Who is alive and who is dying? And if you don’t have data, who will you compensate?”

The IMA, however, is not sitting quiet. “It has come up with an IMA corona warriors fund and is trying to compensate doctors who have not got any relief elsewhere. The medical body has started giving Rs 10 lakh compensation, but it cannot compensate for a life lost,” Aggarwal added.

Dr Sumant Gupta, an oncologist from Sarvodaya Hospital, Faridabad, said that during the initial phase of the lockdown, the biggest challenge was to reach the hospital daily in view of travel bans enforced by state governments. “The Haryana government locked the borders. I would travel from Delhi to Faridabad and it was difficult with daily passes. Doctors should have been exempted from the lockdown. The Uttar Pradesh and Haryana governments said the doctors were spreading viruses. Doctors were not the carriers,” Gupta said.

He added that there were doctors who did not go home for weeks, who were thrown out of their societies because they were treating corona patients, who were manhandled in various colonies….

“We had to stay back in hospitals and arrange places to treat patients. There was fear and panic whether we will carry the infection home to our families, to our elders. Family time had been compromised and continues to be so.”

Also Read: Supreme Court seeks Centre’s response on use of AYUSH medicines as an alternative treatment for COVID 19

With vaccine hopes glimmering like a mirage, life has changed for all. It is time to build a better public healthcare system and infrastructure and heed the advice of frontline corona warriors and look after them too. That will be our gratitude for them as they prepare to fight another hour, another day to save yet another life.