In 2013, the Supreme Court had ordered the shifting of some lions from Gujarat to the Kuno Wildlife Sanctuary in neighbouring Madhya Pradesh. Till now, no action has been taken. Instead, a 25-year roadmap has been prepared by the centre, but no provision has been made for the transfer of lions anywhere in this roadmap 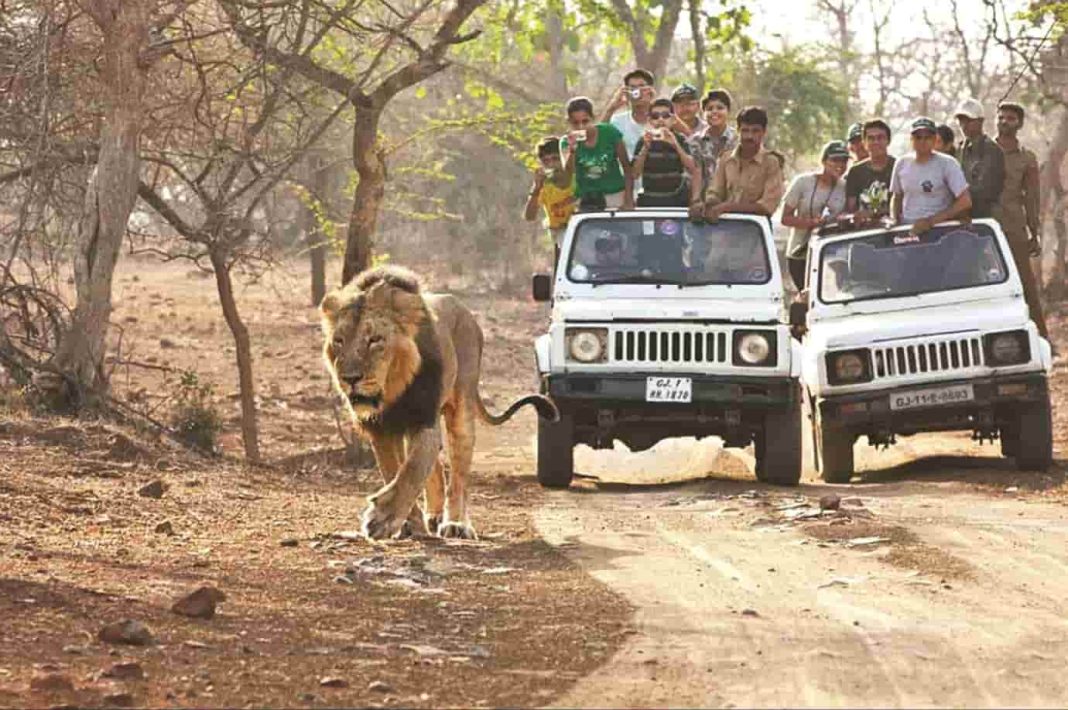 The lions from the Gir National Park in Gujarat are famous for not finding sanctuary in any other state. In 2013, the Supreme Court had ordered the shifting of some lions from Gujarat to the Kuno Wildlife Sanctuary in the neighbouring state of Madhya Pradesh. And in 2018, the centre had assured the Court that its order would be implemented. However, in the last five years, neither has the Court bothered about the compliance of its judgment, nor has the Madhya Pradesh government pressed for it. The Court had given a time limit of six months to shift the lions from Gujarat to Madhya Pradesh.

Now, a 25-year roadmap has been prepared by the centre for Project Lion. But no provision has been made for the transfer of any kind of lions anywhere in this roadmap. The government will declare Project Lion on August 10—World Lion Day. According to sources in the ministry of environment and the Wildlife Institute of India (WII), the Project Lion roadmap is going to focus on natural dispersal in Saurashtra, rather than lion migration.

In 2020, on August 15, Prime Minister Narendra Modi launched the initial proposal of Project Lion. At that time, seven sites, including three each in Madhya Pradesh and Rajasthan, were identified for the relocation of lions, but records up to August 2021 show that Gujarat did not make any provision to relocate lions outside the state and a new 10-year roadmap was prepared with a budget of Rs 2,000 crore to populate Barda Wildlife Sanctuary in Gujarat and some other areas.

Since then, this 10-year plan has been modified by WII into a 25-year roadmap to facilitate the natural dispersal of lions and establish new lion populations within Gujarat. There is no talk of relocation of lions anywhere in this roadmap for the next 25 years. Satya Prakash Yadav led the drafting of the roadmap as additional director general (forest) in the environment ministry and director in Dehradun-based WII.

In a written reply to a query in the Lok Sabha, the Minister of State for Environment, Forest & Climate Change, Ashwini Kumar Choubey, restricted the scope of assessing the suitability of a new habitat for lions to potential sites in Gujarat. According to sources, the 25-year roadmap envisages a two-pronged dispersal technique for the supply of inhabitants in Gir National Park throughout Saurashtra: north-west in the direction of Barda Wildlife Sanctuary, the place new inhabitants can be hemmed in by the ocean; and north-east past Rajkot, skirting the Rann of Kutch, and following the Banas river probably into Rajasthan.

Officials privy to the plan believe it is wishful thinking at this stage, but they say that’s how the assisted natural dispersal should happen in the next 10 to 25 years. The initial challenge is to make the lions cross the Rajkot-Porbandar and Ahmedabad-Rajkot highways by guiding them with feeds to culverts, etc. Further, the official said that after the lions reach Rajasthan, nobody will stop them if they want to enter Madhya Pradesh.

The WII had in 1993 zeroed in on the Madhya Pradesh forest following a search for setting up lion population outside Gujarat. It was acutely felt by wildlife experts that the Gir lions need insurance against mass casualty caused by epidemics or natural calamities. The then Congress government in Madhya Pradesh welcomed the WII proposal. It started work for the relocation of 24 villages from Kuno Wildlife Sanctuary and ensured an adequate prey base. Satisfied with the Madhya Pradesh government’s relocation plan, the centre in 2004 wrote to Gujarat for releasing lions.

However, the Gujarat government refused to give lions to Madhya Pradesh, arguing that they were safe in the Gir National Park and the state would create a second home for them, if needed, within Gujarat. A petition was filed by environmental activists in the Supreme Court seeking directions to the Gujarat government to provide lions to the Kuno Wildlife Sanctuary. The Court in April 2013 set a six-month deadline and constituted an expert committee for the relocation project. It said: “The cardinal issue is not whether the Asiatic lion is a ‘family member’ or the pride of a State but the preservation of an endangered species for which we have to apply the species best interest standard.”

Gujarat filed a review petition, followed by a curative petition, which was dismissed in October 2013 and August 2014, respectively. The prolonged delay in implementation of the order led environment activist Ajay Dubey to file a contempt petition in 2018. In response to the petition, the environment ministry assured the Court that it would hold a meeting to expedite the project. Nothing moved until the plan to introduce African cheetahs in Kuno was revived in January 2020.

As per the official records, the lion population in Gujarat was estimated to be 411 in 2010, but jumped to 674 in 2020—an increase of 60% in a decade. However, 283 of them have died in the state’s forests in the past two years. The Gujarat government stated in the state assembly in March this year that 674 lions are living in the wild, in and around the Gir sanctuary in the state, as on December 31, 2021. These include 206 males, 309 females and 29 cubs. Of these, 345 lions were inside the Gir sanctuary, while 329 lions or almost half of the total population, were outside the sanctuary, the government said.

The Asiatic Lion Reintroduction Project is an initiative of the Indian government to provide safeguards to the Asiatic lion from extinction in the wild through reintroduction. The last wild population of the Asiatic lion is found in the region of Gir National Park in Gujarat. The population faces the threats of epidemics, natural disasters and other anthropogenic factors. The Project aims to establish a second independent population of Asiatic lions at the Kuno Wildlife Sanctuary in Madhya Pradesh. However, the proposed translocation has been bitterly contested by the state government.

The Maharaja of Gwalior, on being encouraged by Lord Curzon in 1904, imported cubs of African lions and attempted to introduce them in the wild in the forests near Sheopur. The lions took to raiding livestock and some even turned man-eaters and were eventually tracked down and shot. The WII began studying the Asiatic lions in their habitats from 1986 onwards and collected fundamental data about the lion, its feeding habits, use of the habitat and ranging habits. The key findings showed that the lions largely preyed upon wild herbivores such as sambar (Rusa unicolour) and chital (Axis axis) and that the size of home range was 70 square kilometres (27 square miles) for females and 140 square kilometres (54 square miles) for the males.

In 1990, the WII proposed the creation of a second wild population of Asiatic lions to safeguard the species against potential calamities in Gujarat’s Gir National Park. In 1993, a workshop was held on the Population and Habitat Viability Assessment (PHVA) of the Asiatic lions and the report was presented to the state forest departments in Vadodara, Gujarat. The state forest departments were asked to suggest suitable sites for reintroduction and provide the basic ecological data.

The Gujarat government has, over time, made various arguments against translocating lions to Madhya Pradesh, saying that the Kuno Wildlife Sanctuary is not a suitable lion habitat and it has inadequate prey base. It also contended that Madhya Pradesh had been unable to provide adequate protection to tigers in its Panna National Park, and the lions if reintroduced there would be in danger. It further said that the proposed introduction of Southern African cheetahs to Kuno Wildlife Sanctuary renders it unsuitable for lion reintroduction.

India is home to a large variety of wildlife. It is a biodiversity hotspot with its various ecosystems, ranging from the Himalayas in the north to the evergreen rain forests in the south, the sands of the west to the marshy mangroves of the east. It is home to about 7.6% of mammals, 14.7% of amphibians, 6% of birds, 6.2% of reptiles and 6.0% of flowering plant species. India’s forest lands nurture about 500 species of mammals and more than 2,000 bird species.

Article 48 of the Constitution of India says: “The state shall endeavour to protect and improve the environment and to safeguard the forests and wildlife of the country.” Article 51-A states that “it shall be the duty of every citizen of India to protect and improve the natural environment including forests, lakes, rivers and wildlife and to have compassion for living creatures.”

As of 2020-21, there are 981 protected areas, including 106 national parks, 566 wildlife sanctuaries, 97 conservation reserves and 214 community reserves. In addition, there are 51 tiger reserves, 18 biosphere reserves and 32 elephant reserves. Hundreds of India’s bird populations are in serious decline, according to a study spanning over 25 years.

The Gir forest in India has the only surviving population of the Asiatic lions in the world. The lion’s share, as some would say.