In a laudable move, the Punjab government has done away with archaic rules and will continue to pay annuity to widows of gallantry awardees even after they remarry. 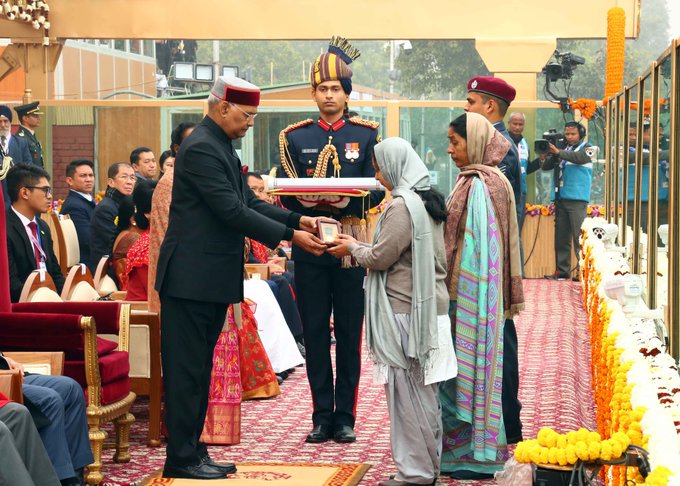 On August 4, the Punjab government confirmed that widows of gallantry award winners, and those who remarry after their husbands’ death, would continue to receive annuity during her lifetime.

As per the archaic rules, the widows and those who marry the dead man’s brother receive the monthly allowance. But from now on, the monthly annuity would also be granted to those women who remarry outside the family of the deceased award winner.

Chief Minister Amarinder Singh had taken note of a media report where a widow of a Kirti Chakra awardee, Major Raman Dada, was denied her annuity after her second marriage. Major Dada of 11th Battalion of the Sikh Regiment was killed in May 1999 while fighting militants in Asaam’s Somitpur district, after eliminating three militants. He was awarded the Kirti Chakra, the nation’s second highest peacetime gallantry award, posthumously on August 15, 1999.

As per rules, his widow, Anjini Dada, was given Rs 13,860 monthly from the state government. But the grant was discontinued in 2005 when she remarried. But in 2011, Anjini got divorced. She has a son from her first marriage and a daughter from the second, whom she looks after in spite of ill health. She then approached the District Sainik Welfare Officer in Jalandhar for support. Major Dada’s colleagues also came to Anjini’s rescue and requested the state government to look into the matter and review her case. But her case was refused by the Finance Department.

This is despite the fact that in 2008, the Supreme Court had ruled that a widow who remarries cannot be deprived of a share in her dead husband’s property. Hearing a similar plea, a bench of Justices SB Sinha and BS Sirpurkar had said that a widow becomes the absolute owner of the deceased husband’s riches to the extent of her share as the provisions of the Hindu Succession Act 1956 would prevail over the earlier Hindu Widow’s Remarriage Act 1856.

Further, in 2014, the Chennai Bench of the Armed Forces Tribunal (AFT) ruled that childless widows of armymen who remarry and continue to depend on the family pension as their primary source of sustenance cannot be denied the benefit. A bench of judicial member V Periyah Kuppah and administrative member K Surendra Nath while quashing a petition which challenged the eligibility to pension of an armyman’s widow who had remarried, said family pension was not legal ownership subject to laws of succession, but a welfare measure of the government.

“The mother is one of the legal heirs along with the widow and children of the deceased, according to the provisions of Hindu Succession Act. However, a family pension is not an estate but a welfare measure by the government,” the bench said. While citing the paradigm established by the top court, the AFT said: “Pension schemes have an overriding effect over general laws of succession.”

In 2017, a bench comprising Justice VK Shali and Lt Gen SK Singh of the AFT in Delhi pulled up the defence ministry for a disparaging policy which dictated that a widow who remarried could only receive benefits attached with a gallantry award if she wed her dead husband’s brother. The bench termed the government policy as “totally derogatory and violative of the Article 21 of the Constitution” which guarantees to every citizen the right to life and personal liberty. The AFT said that on the one hand, the president of India confers the gallantry award to the lady as a mark of respect for her husband’s sacrifice for the country, while on the other hand, such derogatory policies humiliate the widow by denying her rightful dues. “We are saddened to observe such a slipshod treatment to a war widow of the 1971 war,” the Court remarked.

In March this year, the regional bench of AFT, Lucknow, directed the chief of army staff and other respondents to provide family pension to Savita Singh, wife of lance naik Shailendra Singh, who was invalidated from service in 2003 owing to disability. The order was passed on an application of the husband, but was later substituted by the wife after his death.

A bench of Justice UC Srivastava (judicial member) and Vice Admiral Abhay Raghunath Karve (administrative member) allowed the application and asked the army to give effect to the order within four months, otherwise default would invite an interest of 8 percent per annum till actual payment. It further ordered the pension from 2008, the year the husband had died. AFT also clarified that arrears of the pension would be restricted to three years preceding the date of filing of the case before the tribunal in 2017.

Gallantry awards have been instituted by the central government to honour acts of bravery and sacrifice of officers/ personnel of the armed forces, other lawfully constituted forces and civilians. These gallantry awards are announced on the occasion of Republic Day and Independence Day.

Also Read: Supreme Court directs all state governments and UTs to fill up vacancies in the SCDRC within 8 weeks

The history of Indian gallantry awards can be traced back to the rule of the East India Company, when the first formal award was instituted by Lord William Bentinck in 1834 as the Order of Merit, later renamed the Indian Order of Merit in 1902. During the First World War, the British awards system was adopted and continued through the Second World War. Post-independence, new awards were instituted on January 26, 1950, with retroactive effect from August 15, 1947. The Param Vir Chakra is India’s highest military decoration, awarded for displaying distinguished acts of valour during wartime and is equivalent to the Medal of Honor in the US and Victoria Cross in the UK.

Upon the death of the PVC recipient, the pension is transferred to the spouse until her death or remarriage. In the case of an unmarried posthumous recipient, the allowance is paid to his parents. If the award is being conferred posthumously to a widow or widower, the allowance is to be paid to her/his son or unmarried daughter. A monthly stipend of Rs 20,000 is given to the awardee along with their regular pay. The award amount and pension benefits are exempted from income tax. In addition, different ministries under the central government have various financial awards for PVC winners.

According to rules by the Department of Ex-Servicemen Welfare, pension for death is given out when someone dies in service, or because of causes attributable to military service, or in war or counter-insurgency operations. And family pension is given in case of “natural death of the individual” at 30 percent of the last drawn pay.

Did you find apk for android? You can find new Free Android Games and apps.
Share
Facebook
Twitter
Pinterest
WhatsApp
Previous articleSupreme Court directs all state governments and UTs to fill up vacancies in the SCDRC within 8 weeks
Next articleDelhi High Court disposes of plea seeking placing of national flag, statue of justice, national emblem in Delhi courtrooms