Amid India’s hijab row, which is continuing, an Amritdhari Sikh girl student was asked by her college to remove her turban. The incident has sparked outrage and anger. 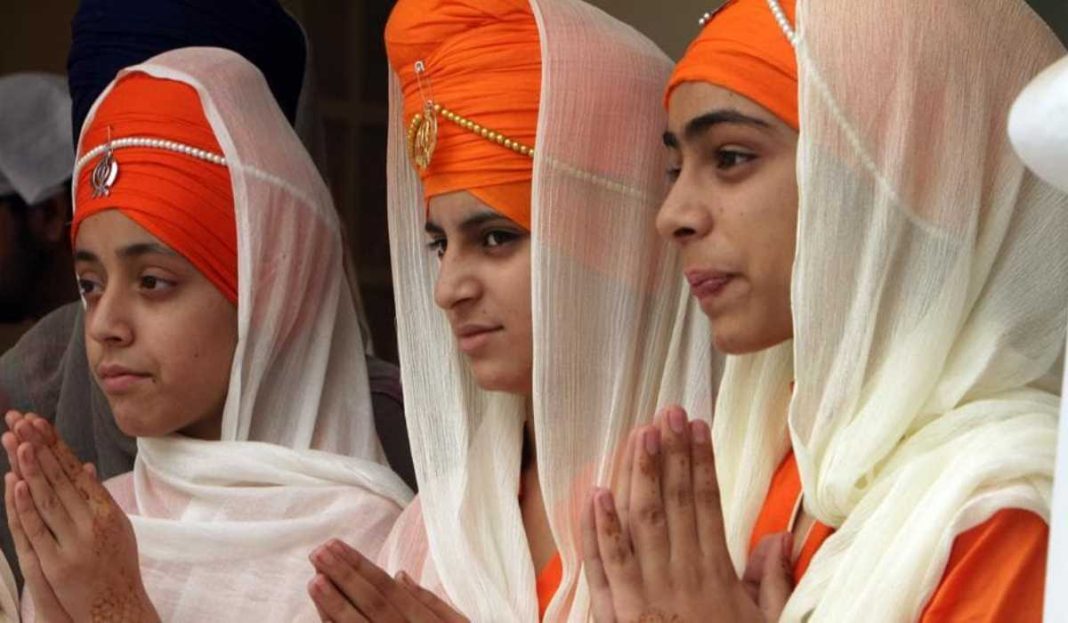 The Karnataka High Court has reserved its judgment on the batch of pleas challenging the state government’s order allegedly banning the wearing of the hijab by Muslim girls in state colleges and educational institutions. However, the Court’s interim order on the hijab row led to another twist when an Amritdhari (baptised) Sikh girl was asked by her college in Bengaluru to remove her turban. While the college authorities claimed to follow the Karnataka High Court’s interim order, the young student refused to do so as it goes against her faith. She is the college’s student union president.

The girl’s family, however, said the High Court will have to clarify on the matter and issue instructions. Further, the family said that the order bypasses non-discriminatory measures. They have decided that their daughter will not remove the turban and are taking legal opinions. Asking a member of the Sikh community to remove his/her turban is widely considered highly incursive.

Amritdhari Sikhs are people within the Sikh community who have gone through the “Amrit Sanskar” initiation ceremony. The members are supposed to follow “Rahit Maryada” (the Sikh code of conduct). They are supposed to keep their heads covered with turbans along with following the five Ks.

The incident sparked outrage and anger. The college authorities claim they had informed the students about the Court’s order when the institution reopened on February 16. However, earlier when a senior government official visited the college, he found a group of girls wearing the hijab and told them to follow the Court’s order. The girls demanded that no students, including the Sikh girl, should be allowed to wear religious symbols.

Educational institutions in Karnataka were embroiled in yet another controversy when a private school in Mangaluru came under fire for reportedly denying admission to a six-year-old Sikh boy because he was wearing a “patka”. The district Child Welfare Committee, which is investigating the matter has directed the NGO, Childline, which works for the protection of all children, to submit a report.

Also Read: Supreme Court expresses happiness over steps taken by the Centre for evacuation of Indians stranded in Ukraine

The controversy over the hijab erupted in Karnataka late last year after some college students in the Udupi district were stopped from wearing the religious headscarve in classrooms. Since then, the row has spread to different parts of the state with other community students too responding by turning up in saffron shawls. On February 5, Karnataka banned clothes that were against law and order.

The Karnataka High Court in its interim order on February 10 restrained students from wearing the hijab or any other religious attire in educational institutions for the time being. A three-judge bench, headed by Chief Justice Ritu Raj Awasthi, Justice Krishna S Dixit and Justice Khaji Jaibunnesa Mohiyuddin, said: “We are ready to decide the issue at the earliest. We can conduct day-to-day hearing.” Following which, the Court reserved its verdict on February 25, 2022.

The Court in its interim order passed on February 10 had observed: “We request and we will pass an order that let the educational institutions start but till the matter is pending and under consideration before this Court, these students and all the stakeholders, they shall not insist on wearing any religious gourmet or head dress or saffron satwa or anything. We restrain everyone because we want peace and tranquillity in the state, which has to be maintained.” The High Court was responding to a batch of petitions filed by Muslim girls, seeking quashing of the state government’s order against wearing of such clothes, “which disturb equality, integrity and public order,” in educational institutions.

The Madras High Court on the same day expressed shock over the country being divided by religion while referring to the dress code in temples. A bench, comprising Acting Chief Justice MN Bhandari and Justice D Bharatha Chakravarthi, expressed the views while hearing a batch of PILs filed by Rangarajan Narasimhan of Srirangam in Tiruchirapalli district.

The Supreme Court has already taken such a decision in Adi Saiva Sivachariyargal Nala Sangam vs Government of Tamil Nadu and the advocate read paragraph no 38 of the judgment, which talks about the Court’s observation with regard to analytical jurisprudence and the need of constitutional courts to intervene. He stated that the regulation is dealing with an activity of the petitioners, which is not even a religious necessity. He added that while Article 19(1)(a) is being referred to, it has to be noted that there can be freedom of speech and non-speech activity and this is a part of non-speech. Since, it is intended to achieve a larger public good, it has and can be done. He stated that education is a part of secular activity and that the grievance stated should not be considered.

On February 23, Senior Advocate Sajan Poovayya, appearing for the College Development Committee and vice-chairperson, stated that even when the hijab is not an essential religious activity, the petitioners, by failing miserably, have tried to make a case out of it. He mentioned the case of Bijoy Emanuel by stating that unless you have a law, no restriction can be placed on an individual with regard to the fundamental rights. In Bijoe Emmanuel vs State of Kerala, VJ Emmanuel, a retired college teacher, had challenged the State Department of Education in 1986 over the suspension of his children, Bijoe Emmanuel, a Class 10 student, Binu, and Bindu from their school at Kidangoor on July 26, 1986 on the ground that they refused to recite the national anthem during the morning assemblies. They objected to singing the national anthem because it was allegedly against their religious faith of Jehovah’s Witnesses.

Upon expulsion, their father filed a writ petition in the Kerala High Court, contending that the expulsion was in violation of the rights to freedom of expression and freedom of religion, respectively protected under Articles 19 and 25 of the Constitution. The Court dismissed the case, finding that no words in the national anthem were capable of offending religious convictions.

The father later approached the Supreme Court. The top court ruled that the expulsion from school violated the children’s rights to freedom of expression and religion. It accordingly set aside the High Court’s judgment and ordered Kerala to readmit them to school.

The petition also mentioned the observation of Justice Dipak Misra in the Sabarimala judgment and raised the question that if teachers/ students are not wearing the hijab, are they not followers of Islam? Or, for that matter, if the Hindus don’t wear saffron attire while they go out to pray, are they not following their religion? He stated that there has to be full freedom for men and women to choose what they wish to wear and not what others want them to wear. Hence, minor children must not be forced to wear the hijab. Let them make their decisions themselves when they become majors. He also mentioned the case of Shayara Bano in that regard.

He stated that everything in the Quran cannot be made as essential religious activity. If one thing has to be included, it should be proved by the person claiming it.

The Karnataka government on February 18 told the High Court that preventing a person from wearing the hijab did not amount to violation of religious freedom of a person, since wearing the hijab was not an essential religious practice of Islam. It also said that mediation was possible in the case related to petitions seeking quashing of the Karnataka government’s order prohibiting them from wearing the hijab in educational institutions, only if both the parties agree. Advocate General of Karnataka, Prabhuling K Navadgi, on February 22, told the High Court that the onus was on the petitioners to prove that wearing of the hijab was a fundamental aspect and not an option or practice.

Earlier, the Supreme Court came down heavily on Senior Advocate Devadatt Kamat when he mentioned a petition before the Court filed against the Karnataka High Court’s interim order, which restrained students from wearing the hijab or any religious attire in educational institutions for the time being. Chief Justice of India NV Ramana said:

“The Karnataka High Court is hearing the matter on urgent basis. I don’t want to express anything, don’t make it a national level issue.”

Recently, Justice Nageswara Rao of the Supreme Court dismissed a petition filed by BJP spokesperson and PIL enthusiast Ashwini Kumar Upadhyay seeking direction to the centre and states to strictly implement a common dress code for staff and students in all the registered and recognized educational institutions in order to secure social equality and promote fraternity, dignity and national integration. The apex court directed Upadhyay to first approach a High Court with his plea.

Considering that even wearing a turban or a patka has kicked up a storm, it has become a major issue among minority communities.