In a laudable judgment, the Allahabad High Court said that it is not mandatory to publish a notice for inter-faith marriages. When it is not needed for marriages under personal laws, why should it be for secular laws? 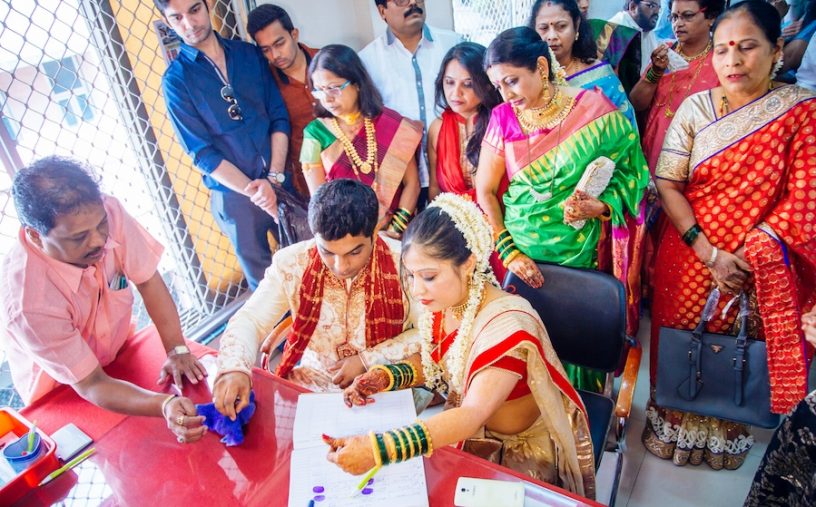 In a landmark judgment on January 12, the Allahabad High Court ruled that the publication of notices for inter-faith marriages will now be optional so as to protect their liberty and privacy. These notices were earlier mandatory.

The Lucknow bench of the Court said that “making such publication mandatory would invade in the fundamental rights of liberty and privacy of a citizen of India” and declared that the 30-day notice period prior to such a marriage would be optional. The single-bench of Justice Vivek Chaudhary said that while giving notice under Section 5 of the Special Marriage Act, 1954, it shall be optional for the parties to the intended marriage to make a request in writing to the marriage officer to publish or not to publish a notice under Section 6 and follow the procedure of objections as prescribed under the Act.

The Court was considering a habeas corpus petition which alleged that an adult woman was being detained to prevent her from marrying her lover from a different religion. The couple submitted before the Court that they could have solemnised their marriage under the Special Marriage Act, but it required a notice to be published 30 days prior to the event and objections to be invited from the public at large.

The petitioner, Abhisekh Kumar Pandey, alleged that his wife, Sufia Sultana, was being held captive by her father because she had converted and married according to Hindu rituals. The woman’s father, however, objected to her living with her husband, despite the couple getting married of their own free will.

The woman and her father appeared in person for the hearing on the direction of the Court. The woman expressed her desire to live with her husband, and the father too “fairly accepted” her decision.

The counsel said that young couples are not in a position to raise these issues before getting their marriage solemnised as any further litigation attracts unnecessary invasion into their privacy, exerting pressure against their choice of a life partner.

As per Sections 6 and 7 of the Special Marriage Act, 1954, an inter-faith couple is required to submit a notice of the marriage to the district marriage officer. The notice is further displayed in the official’s office in case anyone wishes to raise an objection within 30 days. In case they do not make such a request in writing, the officer shall not publish such a notice or entertain objections to the intended marriage and proceed with its solemnisation, the Court said.

It shall be open for the marriage officer to verify the identification, age and valid consent of the parties or otherwise their competence to marry under the said Act. In case he has any doubt, he can ask for appropriate details/proof.

If the couple desires more information about their counterparts, they can opt for publication of the notice under Section 6 and further procedure with regard to objections to be followed. Such publication would not be violative of their fundamental rights as they opt for it of their free will.

In the judgment, the Court referred to reports of the Law Commission and the development of law till the enactment of the Special Marriage Act. It also referred to various judgments, including Lata Singh vs State of UP and Another once a person becomes a major, he/she can marry whosoever he/she likes.

The Court also noted that despite the secular law for marriage, a majority of them take place as per religious customs. It said that when marriages under personal law do not require a notice or invitation for objections, such a requirement is obsolete in secular law and cannot be forced on a couple.

The Court added that even if there was violation of any legal condition in a marriage under the Special Marriage Act, the consequences would follow just like in a marriage solemnised under personal laws i.e. “the courts can decide upon the same, including declare such a marriage to be void, as they do under the personal laws”. The Court also said that such a step is centuries old, cruel and unjust to the younger generation. Further, it asked the Uttar Pradesh chief secretary to communicate the ruling to all marriage officers in the state and concerned authorities.

The ruling was passed after extensively recounting the history of the 1954 law, as well as various Supreme Court judgments that followed which touched upon inter-faith marriages, personal autonomy and the right to privacy. The Special Marriage Act, to provide a framework for inter-caste and inter-religious marriages, was originally enacted in 1872. Despite changes and versions, the 1954 law retained the Victorian era protectionist provisions.

Under the law, which deals with different categories of offences, a marriage will be declared “null and void” if the conversion of a woman is solely for that purpose. The onus to prove that the conversion has not been done forcibly will lie on the accused and the convert.

The Supreme Court in the Puttaswamy case (2017) recognised the right to privacy as a fundamental right under Article 21 of the Constitution. Justice DY Chandrachud held that under the positive tenet of the right to privacy, the state is obligated to take all necessary measures to protect it. Therefore, when two adults exercise their constitutional right under Articles 19 and 21 to consensually choose each other as life partners, the state must respect their personal decision.

Kerala recently issued a circular to stop the publication of the personal information of couples on the registration department’s website, owing to complaints of abuse by communal elements. The High Courts of Delhi, Punjab and Haryana and Rajasthan have separately held that the publication of such notices at the residences of the parties or in national newspapers is not warranted by law and violates their right to privacy.