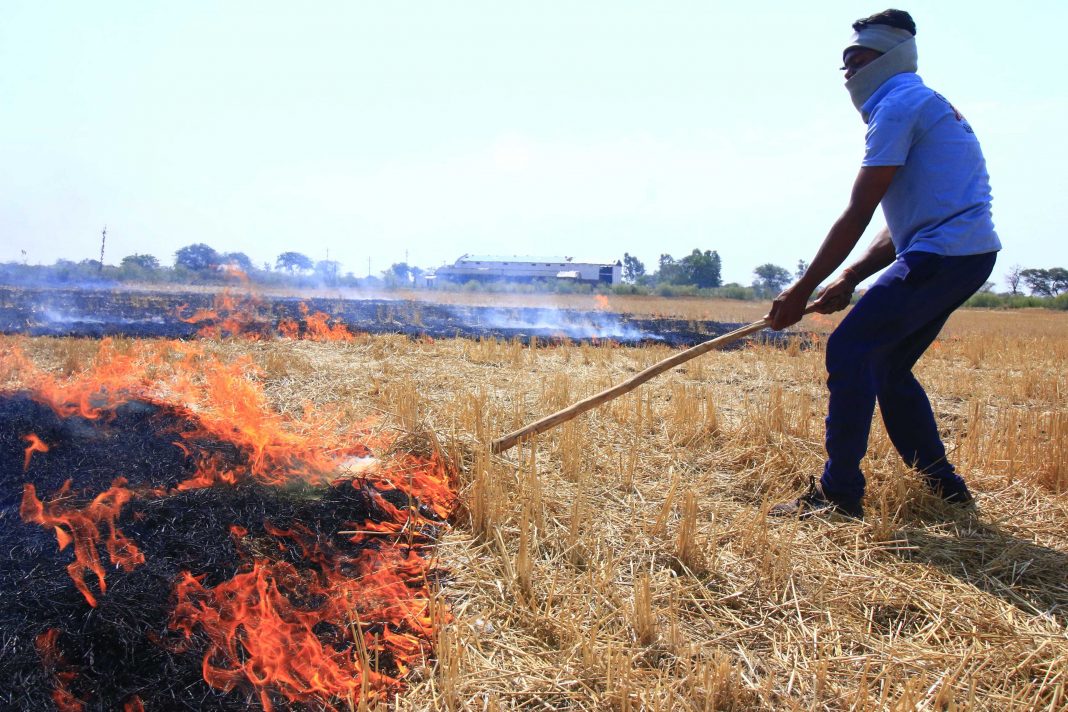 In a positive move, IARI has developed capsules which can decompose stubble from paddy harvest to manure. This will be used in states to reduce pollution, an issue that has gripped courts too.

THE NCR is choking due to rising pollution levels worsened by stubble burning. Farmers in Punjab, Haryana and western Uttar Pradesh usually prefer to burn the stubble of their paddy harvest as it is believed to be a cost-effective method. However, the Indian Agricultural Research Institute (IARI) in Pusa has now developed a low-cost technology as a possible solution to managing crop residue.

Scientists at the Institute have come up with decomposer capsules, known as “Pusa Decomposer”. This will help to ready the land for the sowing of the next crop without the farmers burning the crop residue. Four capsules, which will cost just Rs 20, can be used to make 25 litres of solution effective for one hectare of land. IARI has also tied up with eight companies to boost the production of the decomposer capsules for mass consumption from next year.

In an interview to India Legal, IARI Director Ashok Kumar Singh said that “four capsules scaled up to 25 litres are sufficient for conversion of 5-6 tonnes of paddy straw. This liquid culture can easily be sprayed on paddy residue using simple battery operated knapsack sprayer or tractor mounted sprayer for in situ degradation and improvement of soil health. At ICAR-IARI, the Pusa Decomposer (both in liquid and capsule form), which is a microbial consortium of seven fungal species, has been developed for rapid decomposition of paddy straw.”

These capsules will reduce the time taken to decompose paddy straw. Additionally, unlike burning which erodes the soil quality, this option also makes the land fertile. IARI scientists claim that if this capsule is used by farmers, it will also help reduce their dependence on fertilisers in the long run.

Asked about the impact of burning crop residue, Singh said: “Crop residues are generated in large quantities and constitute an abundant but underutilised source of renewable biomass in agriculture. The amount of crop residues available in India is estimated to be to the tune of 508 million tonnes. It is estimated that burning one tonne of paddy straw accounts for loss of 5.5 kg nitrogen, 2.3 kg phosphorus, 15 kg potassium and 1.2 kg sulphur, besides organic carbon. Crop residue burning is a potential source of greenhouse gases and other chemically and radioactive important trace gases and aerosols. Hence, the recycling of these wastes is an ecological necessity.”

He added that the Pusa Decomposer enhances decomposition of agri-horti residues and helps in managing surplus waste conversion to value added product. The management of residue does not allow crop burning, thereby lowering air pollution.

The response from states to Pusa Decomposer has been good. Singh said that the Delhi government had come forward in a big way and conducted trials on 1,000 hectares with it. Neighbouring states such as Uttar Pradesh and Punjab have planned for 10,000 hectares and 200 hectares, respectively. They are holding trials for paddy straw and stubble degradation in fields.

In all, Singh said there were 50 farmer groups with whom IARI has worked in Haryana. “We would be promoting the use of the Decomposer among them. Similarly in Ghaziabad in Uttar Pradesh, we have been working with an NGO and would be using this Decomposer over 150 hectares. In Punjab, we have offered the technology to the government and are also working closely with the Punjab Agricultural University to promote its use. IARI is trying to use the Pusa Decomposer in over 12,000 hectares in four states.”

He acknowledged that this was a very small area considering that in Punjab alone, stubble is burnt in around two million hectares annually. However, in order to increase the production of the Decomposer, licences have been issued to eight companies and the know how would be shared with them to allow mass production of the capsules.

Last month, Delhi Chief Minister Arvind Kejriwal visited IARI to see the bio-decomposer technique of converting crop stubble into compost. After analysing the whole process, Kejriwal said that this technique would decrease the use of fertilisers and increase the productivity of farm soil. He also said that he would meet Union Environment Minister Prakash Javadekar to discuss the efficient and effective implementation of this simple and practical technique to stop stubble burning.

Meanwhile, the centre has also come forward and told every concerned state government to try Pusa Decomposer. Last month, Javadekar convened a meeting of environment ministers of Delhi, Haryana, Punjab, Rajasthan and Uttar Pradesh and said that if Pusa Decomposer is found successful, it would be expanded to more areas. He said that “stubble burning is one of many reasons for aggravating air pollution in winter months. Others include vehicular pollution, traffic congestion, construction and dust emanating from unpaved roads”.

He added that state governments have already been appraised by his ministry about their action plans. The ministry has also identified air pollution hotspots in different states and asked them to concentrate their efforts to reduce pollution there. In Delhi, there are 13 such hotspots, including Mayapuri, Bawana, Vivek Vihar and Anand Vihar. Similarly in Haryana, places such as Gurugram, Jajjar, Panipat and Sonepat are hotspots.

In a recent development, the centre has brought in a new law, via an ordinance, to address air pollution and to check stubble burning in Delhi as well as the surrounding NCR. On October 26, 2020, Solicitor General Tushar Mehta told the Supreme Court that a draft legislation would be ready soon, following which the Court suspended its earlier decision to have a one-man committee led by former Justice Madan Lokur to monitor stubble burning.

Calling it a welcome step, Chief Justice SA Bobde said while hearing a related PIL: “This is something that government should have acted on….This is not a matter for Public Interest Litigation. The only issue is people are choking because of pollution and it is something which must be curbed.” On October 29, CJI Bobde said the apex court would study the new ordinance promulgated by the government to check stubble burning and pass orders if deemed necessary.

According to the forecasting system, SAFAR, maintained by the Ministry of Earth Sciences, the contribution of stubble burning to the worsening air quality is less as compared to other sources such as road dust, vehicular emissions and industrial activities. Governmental efforts alone are not enough. The participation of the community is crucial to reduce pollution. The use of public transport needs to be promoted. More frequent checking of Pollution Under Control Certificates needs to be undertaken to ensure that vehicles are emitting gases within permissible norms. People need to be educated to switch off their vehicles when waiting at traffic intersections.

A beginning has been made and the momentum should be kept up.