While the Quad meets India’s aspiration of becoming “a stabilising power”, the “India way” is not only being tested by China, but by other members of the group, particularly the US. 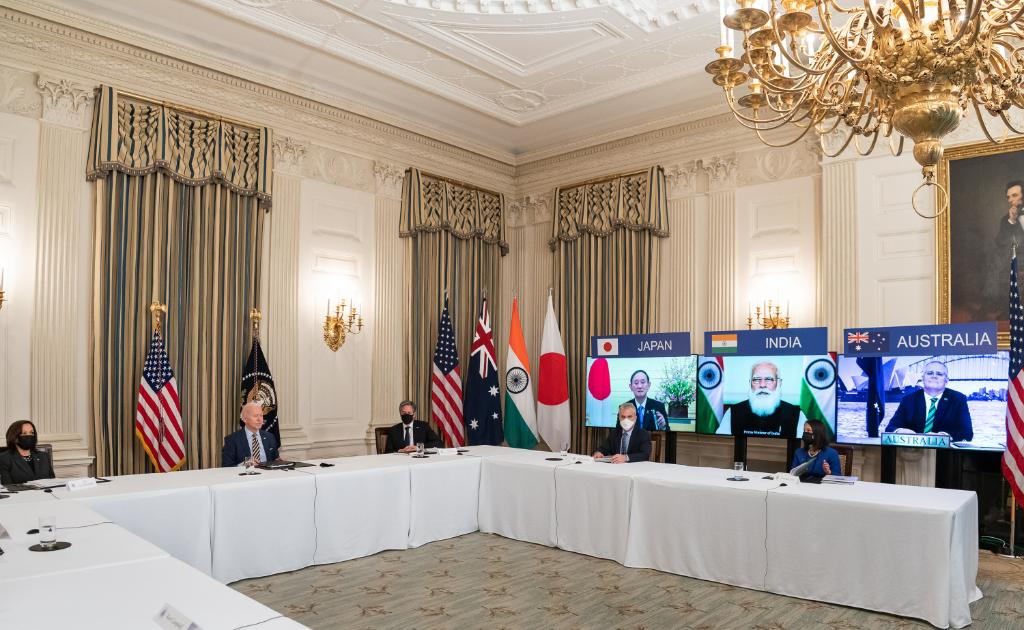 India’s strategic security challenges have become more complex after the “coming of age” of the Quad—the Quadrilateral strategic grouping of the US, Japan, India and Australia. The Quad is no doubt China centric and was formed to ensure a free and open international order based on the rule of law in the Indo-Pacific. However, the virtual summit meeting of the leaders of the four countries, held on March 12, identified a whole array of interests, well beyond the traditional contours of the Indo-Pacific.

India is the only Quad member sharing a 3,488-km-long land border with China. Since the last decade, China had been creating maritime assets in the Indian Ocean in Myanmar, Hambantota (Sri Lanka), Gwadar (Pakistan) and Djibouti (Africa). India has a pivotal role in not only managing the maritime security of the Indian Ocean, but also in interdicting any threat to international sea lanes at choke points. This was evident from the number of bilateral, trilateral and quadrilateral exercises conducted with the Indian Navy in the Indian Ocean this year.

On the other hand, the Quad meets India’s aspiration of becoming “a stabilising power”, as articulated by External Affairs minister Dr S Jaishankar at the ORF’s Raisina Dialogue in April 2020. He said it was “not the India way to be a disruptionist power internationally”. The “India way” was not to be “self-centred or mercantilist”. Therefore, it was important to be global and law-abiding (or rule-based) and consultative.

Jaishankar identified “four or five sharp descriptions” in his vision of the “India Way”. These included bringing India’s capacities for global good to provide security and connectivity and firmly dealing with challenges like terrorism and climate change. India would be a “decider or a shaper” than “abstainer” on issues like climate change and connectivity and a “just and fair standard bearer for the South by political inheritance”. Finally, Brand India would be unique as a power, connected by an extraordinary diaspora, shaping the international discourse while being rooted in Indian tradition and heritage.

India had always been proud of its strategic autonomy. But Jaishankar’s intervention during the Dialogue indicated India’s readiness to adapt it to the strategic needs of the “India Way”. He said the world was moving towards “multipolarity, rebalancing and plurilateralism. Shared values and comforts are creating new combinations”.

We can expect the lofty vision of the “India Way” to be tested at every stage of the country’s participation as an active member of the Quad. It will now be circumscribed not only by the compulsions of managing delicate bilateral relationship with China, but also other members of the Quad, particularly the US.

The US is known for ignoring the sensitivities of friends, as much as foes. On April 7, the US 7th Fleet announced that one of its warships, USS John Paul Jones (DDG 53) “asserted navigational rights and freedoms approximately 130 nautical miles west of Lakshadweep Islands, inside India’s exclusive economic zone, without requesting India’s prior consent, consistent with international law”. It is strange that the US 7th Fleet talks of taking “a position consistent with the international law”, though the US has neither signed nor ratified the United Nations Convention on the Law of the Sea (UNCLOS) unlike India or China.

This raised the hackles of New Delhi. The statement of the ministry of external affairs on the incident pointed out that India’s stated position as per the Convention does not authorise other States to carry out “military exercises or manoeuvres, in particular those involving the use of weapons or explosives, without the consent of the coastal state” in the Exclusive Economic Zone and on the continental shelf. This is consistent with the two declarations India made while ratifying the UNCLOS in June 1995.

The incident came close on the heels of the Quad summit meeting where the US shared a commitment to a “shared vision for the free and open Indo-Pacific” and a region that is “inclusive, healthy, anchored by democratic values, and unconstrained coercion”. India now enjoys a close defence relationship with the US on par with NATO allies. The US had in the past rushed defence armament and equipment to meet India’s urgent needs during its confrontation with China in Ladakh.

Admiral Phillip Davidson, commander of the US Navy’s Indo-Pacific Command, had recently said: “Our relationship with India remains one of Indo-Pacific Command’s highest priority.” He called India a “vital partner in strengthening the security and stability” in the region. “A strong US-India strategic partnership is indispensable for peace, prosperity and security in the Indo-Pacific,” he said.

Against this backdrop, what was the 7th Fleet trying to prove by conducting the Freedom of Navigation of Operation (FONOP) in India’s EEZ? It could only be called American exceptionalism, which shaped Trump’s America First slogan.

According to a Pew survey of March 2021, 89 percent of US adults consider China a competitor or enemy, rather than a partner. Many also support taking a firmer approach to the bilateral relationship, whether by promoting human rights in China or getting tougher on it economically. The percentage of Americans who think limiting China’s power and influence should be a top foreign policy priority has gone up to 48 percent from 32 percent in 2018.

US President Joe Biden’s China policy reflects the popular perceptions inherited from Trump’s fractured relationship with that country. It includes ongoing trade war and mutually imposed sanctions on senior Chinese officials for belligerence in South China Sea, particularly against Taiwan and Japan, and human rights aberrations. However, on other global issues like climate change and participation in the UN Human Rights Council, Biden has reversed Trump’s policies.

As the 7th Fleet incident showed, the US wears its national interest on its sleeve as much as China. Building India’s relationship with the US within the Quad’s ambit will require a lot of deliberation on crucial issues. This was demonstrated initially by the US reluctance to comply with India’s request for assistance in combating the Covid-19 pandemic. Of course, it came with full force after a lot furore was raised within and outside the US.

China’s lukewarm reaction to the Quad in the early years appears to be undergoing a change in the second half of 2020, coinciding with its deteriorating relations with India. Probably, the trigger was the Quad foreign ministers meeting in October 2020, when they discussed a coordinated approach to fight Covid-19 and a regional infrastructure for development. The latter was probably construed as the beginnings of a response to the much-touted Belt and Road Initiative. China was also probably disappointed at the newly elected POTUS broadly reiterating Trump’s China policy.

But the touchstone was probably the Quad summit meeting which transformed the informal framework into a formal grouping with a broad set of objectives, challenging China’s quest for a new world order. China’s reaction to the transformation was caustic. Foreign ministry spokesman Zhao Lijian saw Quad as a mechanism to contain China’s global rise. He accused the group of being dedicated to undermine China’s interests. After the Quad summit, China’s defence ministry said the group “hangs on to Cold War mentality, pursues group confrontation, is keen on geopolitical games, uses the so called China challenge as an excuse to form cliques, and openly incites discord between regional countries”.

Now China seems to have decided to enter into a no-holds barred action in South Asia. Its State Councillor and defence minister Gen Wei Fenghe made a fleeting visit to Dhaka on May 27. He called upon President Abdul Hamid and discussed furthering military cooperation between the two countries.

During the meeting, Wei said that China and Bangladesh are at a crucial time in national rejuvenation and development. To jointly maintain regional peace and stability, the two sides should make joint efforts against powers outside by setting up a military alliance in South Asia and practising hegemonism, a not so apparent reference to the Quad grouping. He also discussed the international and regional situation with Bangladesh COAS Gen Aziz Ahmed.

From Dhaka, Wei flew to Colombo, where after meeting President Gotabaya Rajapaksa and Prime Minister Mahinda Rajapaksa, he said that peaceful development and win-win cooperation is the global trend and the “right way” forward. He added that certain major countries were keen to form cliques and factions and seek regional hegemony, which goes against people’s shared aspiration and severely harms the interests of regional countries.

It is clear that China’s multifaceted focus will now be on India’s South Asian neighbours. This was evident from a video conference organised between the South Asian countries and China to discuss Covid. High- level representatives of Bangladesh, Nepal, Sri Lanka, Afghanistan, Nepal and Pakistan participated in it. India, Bhutan and the Maldives did not participate in the conference.

Did you find apk for android? You can find new Free Android Games and apps.
Share
Facebook
Twitter
Pinterest
WhatsApp
Previous articleSmall Delhi hospital says system has failed us, let us fill our own oxygen
Next articleDelhi High Court issues notice on plea seeking increase in number of crematoriums