The cruel surge of Covid-19 hit all of us at India Legal on May 17, 2021, with the untimely and shocking death of renowned cardiologist Dr KK Aggarwal, our most prolific writer. 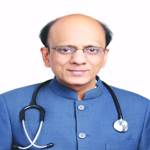 The cruel surge of Covid-19 hit all of us at India Legal on May 17, 2021, with the untimely and shocking death of renowned cardiologist Dr KK Aggarwal, our most prolific writer. Besides writing many informative and timely articles on Covid and other pressing medical issues, the eminent doctor also churned out many videos on social media on Covid in an effort to inform and caution people about the fast-mutating virus. Alas, who knew he himself would succumb to it.

My association with Dr Aggarwal began in December 2017 when I asked him if he would be willing to contribute medico-legal stories for our magazine. I was hesitant about a positive reply considering how busy he was. But the answer was prompt and comforting—he said he would love to write for us and didn’t want any payment. And thus began our long and warm association.

Despite the fact that none of us had actually met Dr Aggarwal, his articles on varied subjects, written with elan and clarity, were an integral part of almost every issue of India Legal. Many made it to the cover of the magazine. He was also a regular guest in shows of our sister concern, APN News and in February 2021, even had a free-wheeling video chat with this writer on Covid-19 and journalism. He was a thorough professional and would submit his articles well before the deadline. He was also humble enough to explain medical jargon to India Legal’s editors, and would take suggestions from them to make changes in his article, which he did without a murmur. His passing away has saddened all of us and as a tribute to this eminent doctor and friend, we are publishing some excerpts of his articles.

In almost all hospitals, the availability of oxygen has dropped dramatically. This has led to oxygen pressure being reduced in order to keep it going longer. But this has resulted in serious patients having a drastic fall in their oxygen levels, leading to many fatalities….

India’s oxygen crisis isn’t just about a growing demand-supply gap. Even if the government diverts all oxygen production in the country to medical uses and coronavirus cases don’t rise in the coming weeks, it will still face a massive logistical challenge to transport and store the oxygen…

While exporting vaccines is a strategy to enhance the prime minister’s image, it is shocking that the country did not plan to vaccinate its own citizens first. There are reports of India facing a vaccine shortage even as vaccination for those over 18 years started from May 1….

The government has fast-tracked its regulatory system for emergency approval of Covid-19 vaccines which are in use in the West. This means that more vaccines may be available in India….This is the right strategy because eventually, the vaccines will have to be made available in the open market. People should have the option to select their preferred vaccine in consultation with their doctor and make an informed choice. However, logistics and supply problems could affect the choice of vaccine.

Incidentally, inactivated vaccines like Covaxin do not replicate and contain dead virus. Therefore, they are unlikely to revert and cause pathological effects. They are incapable of infecting people, but can still instruct the immune system to mount a defensive reaction against an infection…

In contrast to the first wave, eight states, in particular, are contributing 80.70 percent of the total new cases reported in the country in the second wave, according to Health ministry data and are the new hotspots for the infection. These eight states include Maharashtra, Chhattisgarh, Karnataka, Uttar Pradesh, Delhi, Madhya Pradesh, Tamil Nadu and Kerala….

Covid-19 is a highly contagious disease caused by the SARS-CoV-2 virus. This virus is undergoing mutations as it travels from person to person. The new variants have increased transmissibility and therefore spread easily and more rapidly. Pathogen (virulence and infecting dose), host (shedding of the virus, variant), environment (population density, mass gatherings in closed spaces, poor ventilation, physical distancing), behaviour (hand hygiene, cough hygiene, adherence to protective measures) and response (timely implementation of control measures in the affected areas) are factors that increase the possibility of a superspreading event….

Genome sequencing has revealed a new “double mutant” variant of the coronavirus in Maharashtra, in addition to other “variants of concern” that have been found outside India. About 795 cases of the UK, South Africa and Brazil variants of the SARS-CoV-2 virus have been detected in the country. But the new double mutant strain has been detected in only 206 samples, whereas 700 samples sequenced in Maharashtra have shown the UK variant; in Punjab too, 81% of samples (326 out of 401 samples) collected between February 1 and March 10 tested positive for the UK strain, making it the dominant strain in the state. In Delhi, 75 samples have shown the presence of the UK variant.

A faster-spreading new mutation may be one reason for the acceleration in the number of Covid-19 cases. Non-adherence to Covid-appropriate behaviour has also been cited as a key driver of the second wave. After a year of restrictions, a sense of fatigue has crept in and people are becoming complacent. Life seems to be back on track.

The two-child norm in India is also based on the fact that the population of India has already crossed over 125 crore. The country has doubled its population in just 40 years and is expected to unseat China as the most populated country in the next couple of decades i.e. by 2050.  India has a population density of 416 people per square kilometre, which ranks 31st in the world.

The rapid increase in population is also putting a strain on the environment. While developed countries continue to pollute the environment and deplete resources, developing countries are under increasing pressure to compete economically and industrially. One of the largest environmental effects of population growth is global warming. Some scientists fear that this could lead to rising sea levels and extreme weather conditions.

In a far-reaching move, the Union cabinet approved the Medical Termination of Pregnancy (Amendment) Bill, 2020, to increase the upper limit for termination of a pregnancy from 20 weeks to 24. It also extended the contraceptive-failure clause for termination to include “any woman or her partner” in place of the present provision for “only married woman or her husband.

A Supreme Court bench of Chief Justice SA Bobde, Justices BR Gavai and Surya Kant has sought the centre’s response to a PIL seeking the right to passive euthanasia for persons afflicted with rabies which is accompanied by extreme trauma and pain not mitigated by medicine.

The Indian Nursing Council (INC) recently framed draft rules permitting students from the arts and commerce streams to sign up for BSc nursing. Until now, the four-year degree course was only open to students from the science stream. Once the draft comes into effect, all students passing out of Class XII with a score of at least 45 percent would be eligible to appear for the entrance test. This would make them eligible to join the professional course in colleges across India.

The question that needs to be addressed is why is there a change in the criteria wherein even commerce and humanities students can join the course? There are some reasons for this.

In public interest, the National Pharmaceutical Pricing Authority (NPPA) has used its extraordinary powers to ensure availability of 21 low-cost drug formulations. Some are essential drugs, while others are first-line drugs used in national health programmes, the availability of which was getting affected for the last few years. The drugs were not available as pharmaceuticals had limited or no-profit margins. Limited stocks often used to finish by mid-year.

However, the NPPA could change the pricing only under extraordinary circumstances. It has no routine powers to revise the prices of drugs and hence took a series of meetings and permissions to do so. It had to first establish the prices and notify the

changes, monitor the prices of non-scheduled drugs and formulations and oversee the implementation of the provisions of the Drugs (Price Control) Order (DPCO).