Provisions in the Act can be used to provide for compulsory licensing. This will allow the centre, without the permission of the patentee, to use a vaccine for a national emergency at affordable prices. 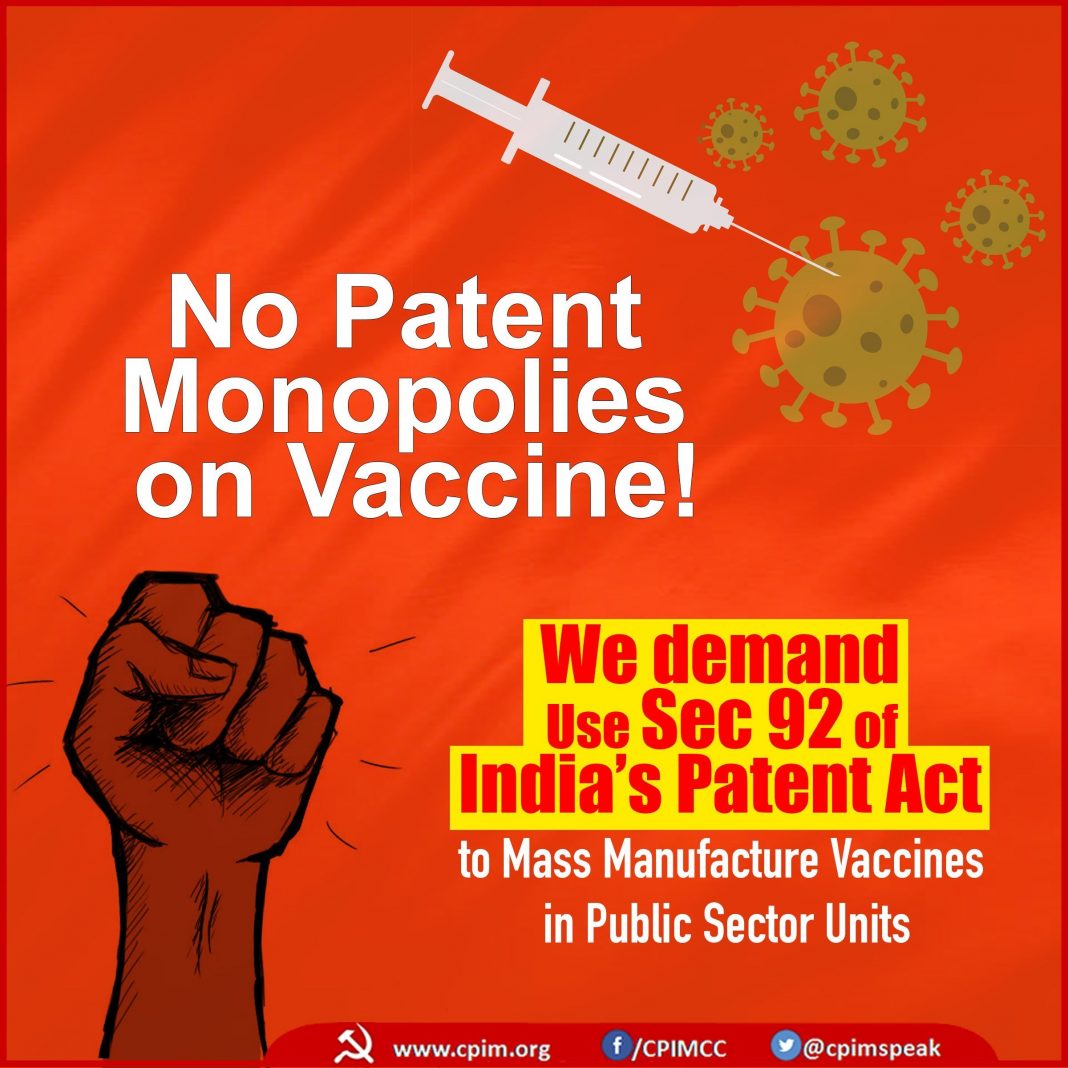 In the midst of the hue and cry about the shortage of Covid vaccines and shutting down of a few vaccination centres, the need of the hour is to multiply the production of vaccines at multiple levels. With huge demands from states, stakeholders and political parties either to invoke the provision of compulsory licence in accordance with the Indian Patent Act 1970 or to share the formula of Covaxin, an indigenous vaccine jointly produced by ICMR and Bharat Biotech, an announcement by NITI Aayog member Dr VK Paul about the intention to invite more companies to produce it came as a ray of hope.

It is a matter of great relief that two central PSUs are allowed to avail technology transfer from Bharat Biotech, apart from Haffkine Bio Pharmaceutical Corporation. This relief was made at a time when the government made its stand clear to the Supreme Court in a suo motu case that it had no intention to exercise its power under the Patent Act over Covid vaccines and medicines at this stage, claiming it to be “counterproductive”.

Though the provisions of the Patent Act could be invoked to increase the flow of Covid-related drugs, they cannot be invoked with regard to its vaccine as it has not been patented under Indian law. Undoubtedly, the government can use the Indian Patent Act 1970 if there is at least an application for a patent pending with authorities. However, the government can still draw a parallel from Section 92 of the Act and accordingly, make a new law by ordinance considering the grave situation.

Section 92 provides for compulsory licensing. So the government, without the permission of the patentee and through a gazette notification, can issue a compulsory license after grant of a patent in the case of a national emergency, extreme urgency or for public non-commercial use especially when the medicine/vaccine is not available at an affordable price for the general public.

A landmark decision was made in India in 2012 when PH Kurian, the then Controller General of Patents, in a 62-page order granted a compulsory license invoking Section 84 to a Hyderabad-based drug maker, NATCO, for production of a cancer drug. It was at that time sold at an unaffordable price as it was not made in India. Analysing all these aspects, NATCO was permitted to produce and sell a generic version of the cancer drug. The first of its kind order by the controller general was further upheld by various appellate courts, making it final and binding.

The history of drug patents in India, initiated in 1970, offers concrete solutions to our current problems. Then Prime Minister Indira Gandhi replaced English-made patent laws with a new patent law, renouncing completely product patents and limiting patents to its process. Resultantly, every company can manufacture a drug using a different process other than that of the patentee, and any company, which is able to manufacture a drug by a process other than that of patented product, could sell the drug in the Indian market at an affordable price. This was intended to protect the Indian pharmaceutical industry from foreign influence and also with a view to produce indigenous medicine to the needy and poor people of our country at an affordable price.

Changing the production process through reverse engineering in pharmaceuticals is a cost-effective proposition. The 1970 Patent Act granted huge opportunities to Indian companies to manufacture and sell pharmaceuticals at a lesser price than that of original patent holders, mostly in western countries.

Such drastic changes left warning echoes in western countries, which have lobbied for a new round of world trade negotiation. This finally led to the Uruguay Round (UR) of trade negotiations launched in 1986 within the framework of the General Agreement on Tariff and Trade. It has passed the TRIPS (Trade Related Aspects of Intellectual Property Rights) as part of UR agreements, establishing a new WTO, wherein compulsory licensing was granted to member countries to allow their domestic companies to manufacture a similar medicine if the patentee didn’t supply the medicine at an affordable price during emergencies.

This was agreed upon by member countries at the instance of na­tions such as India. When India amended the Patent Act of 1970 in 2005 to incorporate the WTO provisions for compliance, it included the provision of compulsory license, which was first invoked by NATCO in its fight against drug giant Bayer AG. PH Kurian, after having gone through various research and legal aspects, favoured compulsory license in his heroic decision. This was appreciated by various scholars and legal luminaries all over the world as it helped millions of poor people who suffer from cancer and kidney ailments.

India can grant compulsory licenses for the production of patented medicines/related medicines like remedesvir, which is currently in high demand. Many companies have expressed interest in the production of such related medicines. At the time when H1N1 virus was spreading, the US government immediately issued a warning of compulsory licenses in the US, resulting in a steep decrease in the price, coupled with more availability.

Section 100 of the Patent Act 1970 provides that a patent be used for the “purpose of government”. This implies public interest and gives the central government the power to authorise anyone (a pharmacy company) to use the invention. This provision enables the government to license the patents of the vaccine to specific companies to speed up the manufacturing process and ensure equitable pricing. The ambit of Section 100 is wide enough to even cover the use of patented products by a third party on the express authorisation obtained under Section 100 (1) by the third-party agency from the government, and payment of an agreed royalty or remuneration to the patentee under Section 100 (3), based on a contract between the two parties.

Since the ICMR, an institution under control of the government, is the co-owner of Covaxin, it can take any decision with respect to the sharing of formulas even without invoking Section 92 or Section 100 of the Patent Act 1970.

Lastly, Plan B and C shall be thought out in advance to urgently address the deficiency of vaccines and in expectation of the third wave. As part of the government’s Atmanirbhar policy, ICMR should think of enabling more PSUs such as the HBL Integrated Vaccine Complex in Chengalpettu to manufacture and supply such vaccines and medicines. IP rights waiver of the US government will not help India in the near future as WTO takes its own time to settle the matter, but it is high time we focus on Atmanirbhar Bharat and decode the Indian Patent Act to help ourselves.