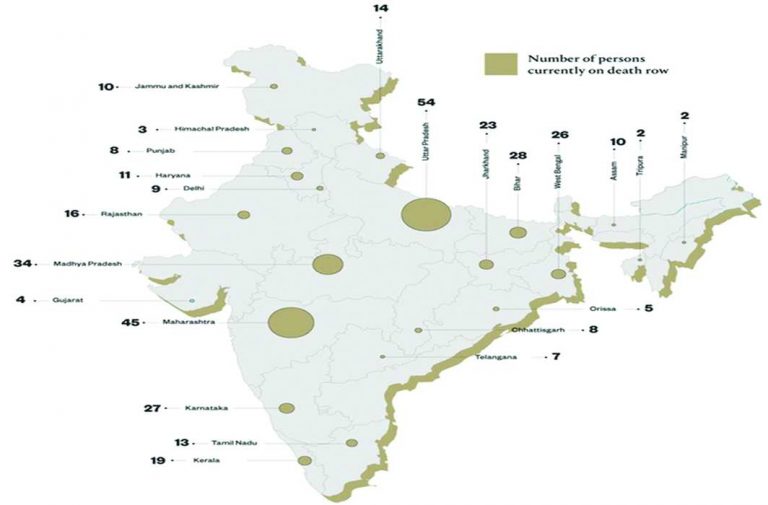 A study, “Death Penalty in India: Annual Statistics Report, 2019”, has been released by Project 39A of the National Law University, Delhi. According to the report, 2019 saw an increase in the proportion of death sentences given for sexual offences.

Around 53 percent of the death sentences imposed in trial courts and 65.38 percent in high courts involved sexual offences along with murder. The report also says that out of the 54 cases of sexual offences for which the death penalty was given in 2019, 40 involved a victim below 12 years.

The report further highlights that no death sentence was awarded in 11 states—Andhra Pradesh, Himachal Pradesh, Haryana, Delhi, Jammu and Kashmir, Arunachal Pradesh, Goa, Meghalaya, Mizoram, Nagaland and Sik­kim—in 2019, while Rajasthan topped the list with 13 death sentences. It shows a drop in the number of prisoners being sentenced to death from 426 in 2018 to 378 as on December 31, 2019.The report also observed that the Supreme Court, during the tenure of former Chief Justice Ranjan Gogoi, listed and heard the maximum number of capital cases (27) since 2001.

The annual report attempts to create comprehensive year-by-year documentation of movement in the death row population in India. The publication tracks important developments in the administration of the death penal­ty and criminal justice in 2019.

This course offers practical hands-on experience on topics like Application Log Analysis and why it is important to analyse application logs, where to find the logs, format analysis of logs, how to read and present forensic reports, types of attacks and so on.

In an attempt to restrict the number of institutions offering undergraduate legal courses, the Bar Council of India rejected 55 applications by colleges seeking permission to start fresh law courses. A majority of the applications were from institutions in Uttar Pradesh. The BCI’s decision is a part of its sustained efforts to regulate and improve the standards of existing colleges. Earlier, the BCI had faced severe criticism for approving institutions that failed to meet UGC (University Grants Commission) standards.

“We are expecting the colleges to go to the court but we are ready with our counter argument. There is no need for new colleges and the existing ones are sufficient to feed the legal system at present,” said BCI co-chairman Ved Prakash Sharma.

In August 2019, the BCI imposed a moratorium on opening of new colleges, except National Law Universities, if proposed by a state.

Currently, there are 1,500 law colleges in India.