Seventy years after the extinction of these majestic animals in India, they will be flown in from Namibia and South Africa to Kuno National Park in MP over a period of five years. But will they be able to survive the pollution in the country? 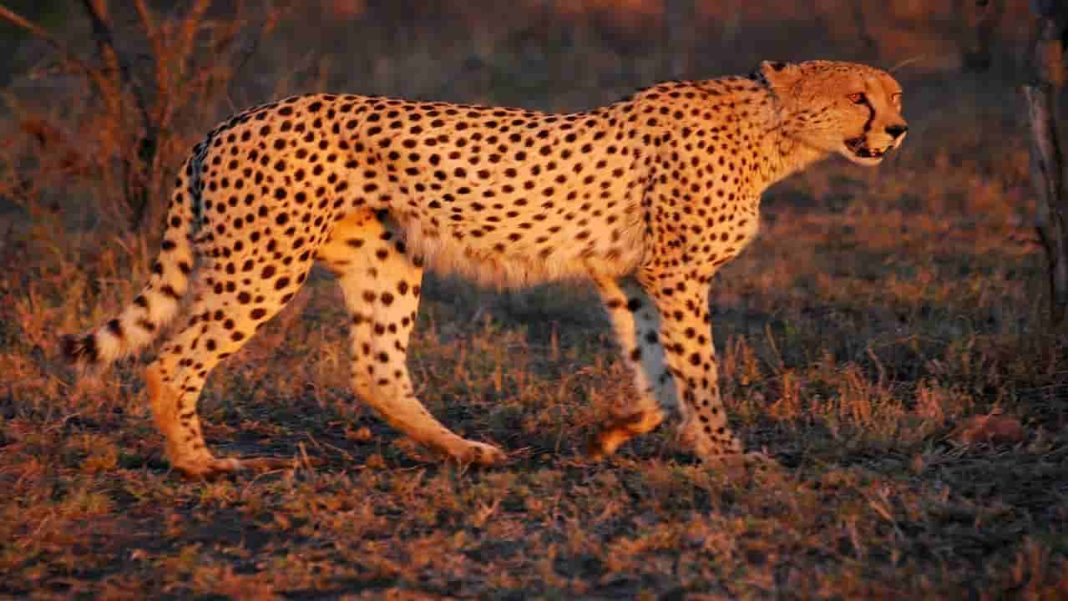 After 70 years, Project Cheetah has taken off to settle these animals in India. Under the programme, cheetahs from Africa will be settled in Kuno National Park in Madhya Pradesh.

The cheetahs were supposed to come to India on August 15, but due to medical examination and other problems, it was postponed. Cheetahs are to be brought from Namibia and South Africa under the Cheetah Project over the next five years. There is a plan to reintroduce 50 cheetahs across the country. Initially, eight cheetahs (five male and three female) will be airlifted from Johannesburg to Delhi airport.

From there, army helicopters will take them to eight helipads being built in the Park and Karahal for the movement of VVIPs. A road from Karahal to the Park is being built as an alternative transport system. The Public Works Department and MP Road Development Corporation were instructed to complete the work by September 14.

Cheetahs will be brought from Namibia in special boxes. There will be one cheetah per box, which will have a skylight for light and air to filter in. The cheetahs can be sedated with anesthesia, but they will regain consciousness in half an hour and then they will not be sedated. The behaviour of the cheetahs will be observed for three months. If all goes well, a male cheetah will be released into the wild. He will be fitted with a radio collar and will be monitored continuously. After about four months of success, a female cheetah will be released.

Dogs, along with cows and buffaloes, are being vaccinated in and around Kuno-Palpur Sanctuary before bringing the cheetahs here. In particular, multivalent and anti-rabies vaccine will be applied to dogs so that no infection spreads to the cheetahs. The vaccine also has a dose of protection against canine coronavirus.

The Kuno river, originating from Patai village in Guna district, joins the Chambal. Kuno National Park is spread over 748 sqkm on the border of Sheopur and Morena districts on the banks of the Chambal. Although the arrival of cheetahs in Madhya Pradesh, which is also called the Tiger state, should not have been a big deal, it has become so because no one has seen cheetahs in the country for the last 70 years. The last cheetah was seen in 1948 in Koriya district of Chhattisgarh. After this, the government announced a reward of Rs 5 lakh to anyone showing a cheetah in the country, but this didn’t help either.

On September 7, four South African experts Michelle Febb, Amfo Tjian, Junisani Mkhubel and Dr David Zimmerman took a full tour of the cheetah enclosure, as well as all the blocks built inside the enclosure. They gave some suggestions and asked them to fulfill whatever other requirements were needed. They also said that Kuno was completely suitable for the cheetahs.

The Supreme Court in January 2020 allowed the centre to introduce the African cheetah to a suitable habitat in India, including Kuno. The Court passed this order on an application filed by the National Tiger Conservation Authority (NTCA) seeking permission for the introduction of the African cheetah from Namibia as the Court was monitoring the government’s ambitious project.

While fearing that the cheetah may come into conflict with a parallel and a much-delayed project to reintroduce lions into the same sanctuary, in May 2012, the top court had stalled the plan to initiate foreign cheetahs into the Palpur-Kuno sanctuary in Madhya Pradesh. It was also worried whether the African cheetahs would find the sanctuary favourable as far as abundance of prey was concerned.

Also Read: A Life of Dignity

The Union government in 2010 set up an expert panel for reintroducing the cheetah in India. This panel recommended that the home of the fastest animal in the world could be Kuno-Palpur in Madhya Pradesh, Velavadar National Park in Gujarat and Tal Chapar sanctuary in Rajasthan.

In 2010, NTCA filed a plea requesting permission to introduce African cheetahs from Namibia as the animal had become extinct in India. But the apex court, while calling the animal a “foreign species”, declined permission in 2013. The last cheetah died in India in 1947. After five years, it was declared extinct in 1952 and since then, there has been no cheetah in India. The cheetah is the only large carnivore in the country to become extinct due to hunting and food problems.

Before the Mughal period, the number of cheetahs in the world was very high. The cheetah is a carnivorous animal and habitual hunter, yet it was reared in many countries, including Egypt and India. Cheetahs were also domesticated during the Mughal period, but were used as weapons to hunt the enemy. After this, kings started hunting cheetah to prove themselves as best hunters. In 1948, King Ramanuj Pratap Singh Deo of Koriya hunted the last three cheetahs remaining in India. It is said that Akbar had preserved about 1,000 cheetahs during his reign. It has also been recorded in the Journal of Bombay Natural History Society that there have always been cheetahs in India. But, gradually they disappeared.

Doubts were also raised whether it would be possible in India to give the large area required for cheetahs to survive. Also, they may find it difficult to live here due to the environment. Although the cheetah is a carnivorous and predatory animal, it can survive only in a healthy environment. In all the areas of the world where pollution has increased, the cheetah became extinct naturally. However, in India, it was eliminated by hunting.

Increasing pollution and a thick layer of CO2 in the atmosphere has heated the Earth. The survival of cheetahs depends on a clean environment and balance in CO2 levels.