On Constitution Day, Prime Minister Narendra Modi and Chief Justice of India DY Chandrachud pay encomiums to the document that binds India together. 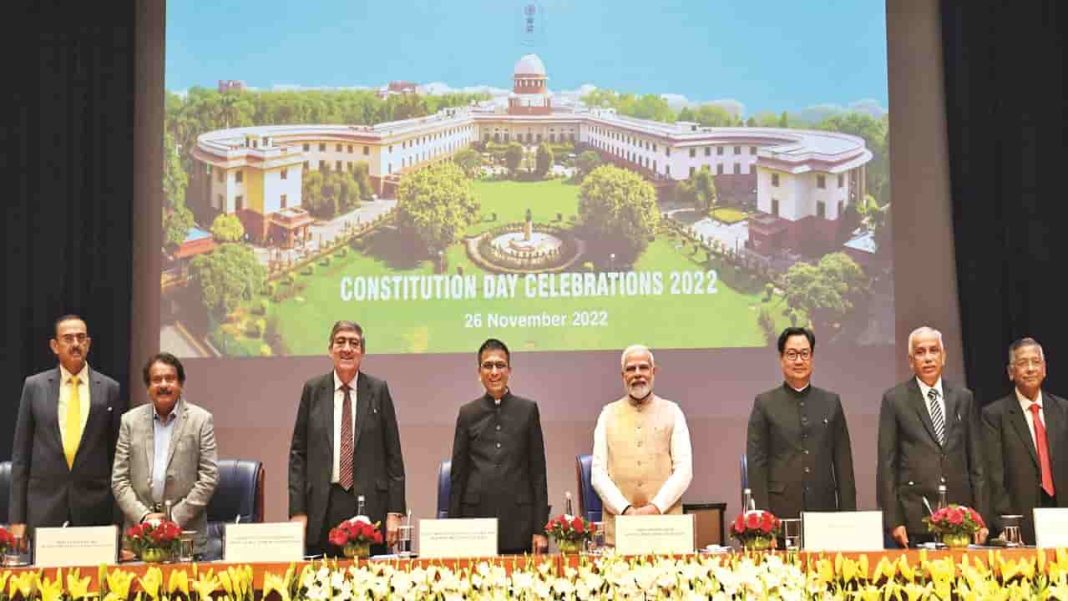 The Constitution is India’s greatest force and “We the People” in the Preamble weren’t mere three words, but a belief, a pledge, a faith, Prime Minister (PM) Narendra Modi said at the Constitution Day celebrations organised by the Supreme Court.

The PM said this sentiment in the Constitution formed the core of the Indian system. “We’re all celebrating the Azadi ka Amrit Mahotsav. In the last seven decades, the Legislature, the Judiciary and the Executive have all helped in the making of the Constitution. India’s development and strong economy as well as its international reputation have grown in the years gone by. People now look up to us with tremendous hope. The country is moving forward,” Modi said.

“Our country, as the Mother of Democracy, is strengthening our constitutional beliefs. The pro-people policies initiated by the government have empowered the poor and women of the country,” he added.

Modi highlighted the 14th anniversary of the Mumbai terror attacks, which took place on November 26, 2008, and in which 175 people died and 300 were injured. He said: “Fourteen years ago, when India was celebrating Constitution Day, the haters of humanity attacked the country. I pay respects to the ones who laid down their lives in that attack.”

Stating that the role of the government was to keep citizens happy and make their lives easier, the PM said: “It is said in the Mahabharata that keeping the citizens happy, standing with the truth and compassion is what a nation should be made of.”

The PM said the Indian Constitution was open, futuristic and known for its progressive views. “The spirit of the Constitution is youth centric. The development of our country is on the shoulders of the youth. To make the youth understand the Constitution better, I urge them to participate more in discussions and debates on the topic. The youth must be made aware about the Constituent Assembly and the sacrifices made by people associated with the same.”

Modi launched several new initiatives under the e-court project, including Virtual Justice Clock, JustIS Mobile App 2.0, Digital court and S3WaaS Websites. He said: “I congratulate all of you for the e-initiatives, which will ensure access to justice for all. Mahatma Gandhi used to say that our rights are our duties. In this Amrit Kaal, we have to remember our duties and must fulfil them with utmost dedication and devotion.” He added that the judiciary was taking important steps to make laws easier for the common man and also to ensure timely justice for everyone.

Speaking after the PM, Chief Justice of India (CJI) DY Chandrachud said it was essential the judiciary reached out to people, rather than vice-versa and said technology can help in this. He said the adoption of technology in listing of cases and court hearings would weed out delays.

The CJI said access to justice should be defined to uphold the faith the people had in the legal system. Noting that technology alone won’t be enough, Chief Justice Chandrachud said it must be augmented with institutional reforms to make access to justice easy.

Reiterating a point he made after taking over as CJI, he said with the district judiciary being the first point of contact for access to justice, it must be lifted from the mindset of being a subordinate judiciary. This is the first event where the PM and the CJI addressed the audience together; the PM had to skip the swearing-in ceremony of CJI Chandrachud due to the Himachal Pradesh election campaign.

The CJI said all the judges in India, ranging from the district court to the Supreme Court, must reflect upon securing the constitutional vision of securing liberty, equality and fraternity. “Until we open our minds to people with vivid life experiences, we will be lacking in our role as judges. An institution thrives with time only when it functions democratically. I believe as CJI, it is my responsibility to consult judges in the Supreme Court, High Courts and district judiciary,” he said. The CJI said that is why it was important to enhance the participation of marginalised communities and women in the legal profession.

The CJI said the story of the Constitution was one of human struggles and sacrifices, of undoing injustices against marginalised communities. “India’s liberation from colonial rule and drafting the Constitution were simultaneous projects. When India gained her independence, she was plagued by social evils,” he noted.

He said the Supreme Court had noted in a judgment in 2018 that in Indian Young Lawyers, the struggle for social emancipation has been going on. He added that the Constitution was the end product of these two struggles and it seeks to deliver rights to shrug off the colonial baggage. “The Constitution entrusts the Legislature, Executive, and Judiciary to bridge the gap between institutional ideas and social realities,” he said.

He said scholars have documented the refusal of colonial courts to interfere in cases involving socio-religious customs, even if the rights of marginalised communities were in question. This changed after the adoption of Constitution. “The jurisprudence emanating from Indian courts have influenced decisions in South Africa, Kenya, Australia, Jamaica, Uganda, Bangladesh, Singapore, Fiji and others,” noted CJI Chandrachud.

Justice Chandrachud spoke of the e-court initiatives launched by PM Modi. He said the JustIS Mobile App 2.0 was a mobile application for the district judiciary with a real-time dashboard for all district level courts across the country, showing data of cases instituted, disposed and pendency of cases on day/week/month basis at the court level. The app would help judicial officers and judges monitor pendency and disposal of cases.

The Digital Court is an initiative to make court records available to the judge in digitised form to enable the transition to paperless courts.

On S3WaaS, the CJI said it was a multilingual, citizen friendly and disabled-friendly cloud service developed for government entities to generate secure, scalable and sugamya (accessible) websites.

Union Law Minister Kiren Rijiju said quick, affordable justice has to be the buzzword with prioritisation of legal literacy in local dialects. The Department of Justice has developed a pan-India access to the justice system depending on regional and indigenous tools in line with the prime minister’s vision to implement local languages in courts for the common man’s convenience. Rijiju said harnessing technology is important to improve acces to justice.

Seeking pre-litigation advice has been made possible through tele-law services where a citizen can connect via telecom with a panel of lawyers. Some 25 lakh people have benefited from this service, he said. In the next five years, one crore people will be able to get advice, the law minister said.

Under the aegis of the Law Ministry, the Bar Council of India has constituted Bhartiya Bhasha Samiti chaired by former CJI SA Bobde. The Samiti lists words and phrases commonly used in law for developing a common vocabulary for translating legal material in regional languages.