He who pays the piper…

This week’s cover story is part of our continuing reportage on a subject that is perhaps the most explosive constitutional showdown since the Founding Fathers, in 1950, framed the principles, laws, rules and regulations within whose framework the institutions of the newly-founded Indian Republic are designed and meant to function. 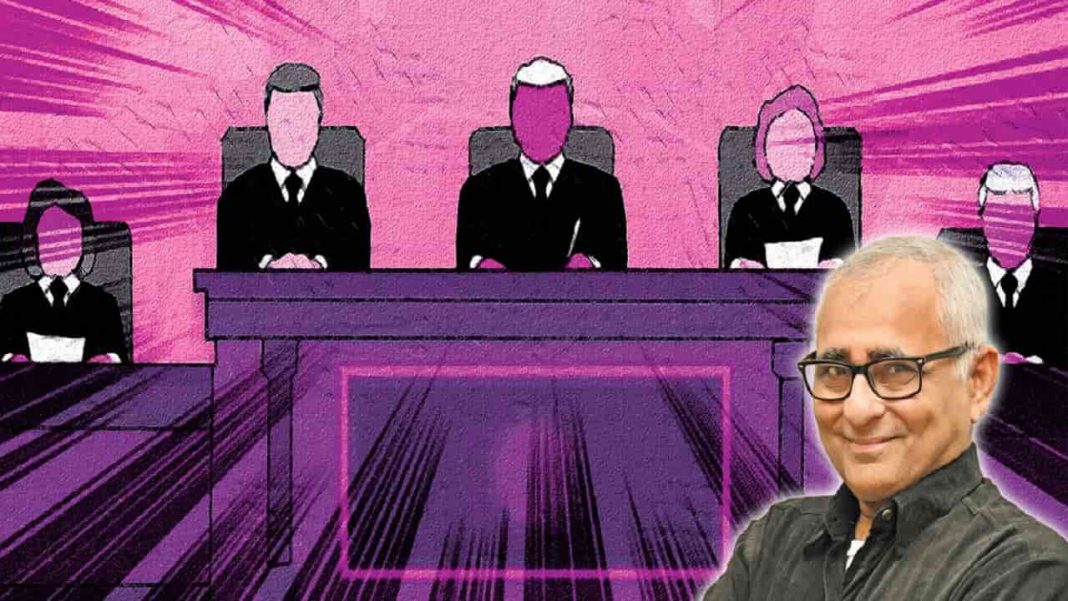 This week’s cover story is part of our continuing reportage on a subject that is perhaps the most explosive constitutional showdown since the Founding Fathers, in 1950, framed the principles, laws, rules and regulations within whose framework the institutions of the newly-founded Indian Republic are designed and meant to function.

Very simply, the power struggle is all about who will get control of the Indian judiciary. The tried and tested method of enslaving the benches is to control the appointment of judges: He who pays the piper calls the tune. As of now, despite its myriad flaws and periodic genuflections to the executive branch of government, particularly in politically sensitive cases, the courts have proven themselves to be the only safety valve for ordinary people to let off steam.

More than the legislature, the executive and administrative branches of government, the courts have played a significant role in upholding the basic tenets of natural justice, habeas corpus, the rule of law, and human rights—proving that the doctrine of separation of powers that keeps tyranny at bay, can be enforced only by an independent judiciary.

As the iconic former Chief Justice of India MN Venkatachaliah writes in this issue: “Judicial activism is a slippery slope. You are acting in an area where legislators or administrators should be doing their duty. You see somewhere and somehow some institutions are not performing their constitutional duties and obligations. Then the courts have to intervene. Someone else has to do the job so that the demand of the Constitution is met. The government has no choice. It has to take the decision of the court in a gracious way and work out democratic equality.”

Writes Professor Upendra Baxi, the world-renowned jurisprudential thinker and scholar: “I say the Supreme Court does play politics, but plays the politics of interpretation and politics of principles. Not politics understood in the everyday sense—of patronage and power.”

Baxi could well be describing today’s constitutional battleground in which the Indian judiciary, led by the Supreme Court under the stewardship of CJI DY Chandrachud, is fending off the executive’s assault on the system that allows the judiciary to be independent in choosing and appointing judges.

Our cover story relates how the government is upping the ante in its bid to make itself a participant in the judges’ appointment process and how the Supreme Court has, in return, taken a defiant stand.

Since Prime Minister Nehru’s time, till the Judges Case, for 40 years, judges were appointed by the executive, by the prime minister, law minister and president.

Then the collegium system emerged through an interpretive reading of the Constitution by the senior judiciary. The “First Judges Case” in 1981 presided over by a seven-member bench of the Supreme Court interpreted the words “shall in consultation with CJI in Article 217 (of the Constitution)” to mean effective and meaningful consultation without giving primacy to the views of the CJI.

The “Second Judges Case” in 1993 presided over by 11 judges interpreted the words “consultation” in Article 124 (of the Constitution) to mean concurrence and that the views of the CJI along with two seniormost judges would be binding on the president of India.

In the “Third Judges Case” in 1998, presided over by an 11-judge bench, the Attorney General of India at the outset submitted that the government does not want to seek review or reconsideration of the rationale laid down in “Second Judges Case”. The arguments were addressed only on the question of reference made by the president.

The “Third Judges Case” expanded the numerical strength of the collegium to the CJI plus four seniormost judges for elevation to the Supreme Court and transfer of the judges of the High Court.

The CJI, plus two seniormost judges, were to be the collegium for appointment of judges and CJs of High Courts. It was further laid down that the views of the concerned seniormost state judge in the Supreme Court should be taken.

The first real political challenge to this system came in 2015 when parliament voted to create the controversial National Judicial Appointments Commission (NJAC) that would formalize the role of the executive branch in the appointment process.

That year, the long-awaited tantalizing Supreme Court judgment in the NJAC’s case was out in the public domain on October 16—about four months after the conclusion of hearings. The Court essentially struck down as unconstitutional the amendment that validated the National Judicial Appointments Act passed by parliament and thus paved the way for the continuance of the collegium system for the appointment of judges to the higher judiciary.

The then Union Law Minister Sadananda Gowda reacted by saying the judgment was surprising. Arun Jaitley called it the “tyranny of the unelected”.

The basic challenge against the NJAC before the Court was that it impinges on the independence of the judiciary which is one of the postulates of the basic structure of the Constitution. The Constitution bench presided over by Justice JS Khehar by 4:1 struck down the NJAC and the constitutional amendment as ultra-vires as it scuttles the judiciary’s independence.

The following are the broad reasons given by the judges in their separate judgments: (1) The AG at the outset submitted in the “Third Judges Case” that the government does not wish to seek review or reconsider the decision in the “Second Judges Case”; (2) The memorandum of procedure evolved by the executive gives it adequate and fair participation in the process of appointments; (3) The controversial recommendations made by the collegium have been accepted by the executive without any demur. Thus, there was a failure on the part of executive in not performing its constitutional duty. For that, the collegium system cannot be condemned; (4) The presence of the law minister in NJAC is tantamount to executive interference; (5) The veto power given to eminent persons is vulnerable to misuse and they can veto any and every recommendation made by the CJI and two seniormost judges in NJAC; (6) The judges elevated by a political lobby would be loyal to the political bosses and a sense of reciprocity will prevail. Thus, the judgments rendered in crucial matters may not be free and fair.

The majority of the judges held that the collegium system which evolved in the Second and Third Judges Cases does not require any reference to a larger bench and the law laid down is correct.

The collegium system, for all its infirmities, has worked well in assuring that women and men of integrity, dedication and a passionate commitment to constitutional morality have been appointed to the most sensitive judicial positions in the land. And the system will continue to survive and withstand assaults if it continues to stand for the rights and needs of all those seeking equal access to justice.

The strength of any judicial system are the common people of the land and standing together they can ensure that the Constitution survives politics.