The centre has again sought time from the Court to decide on demands to grant minority status to Hindus in states where their numbers are less than other communities. It said that the matter was sensitive. 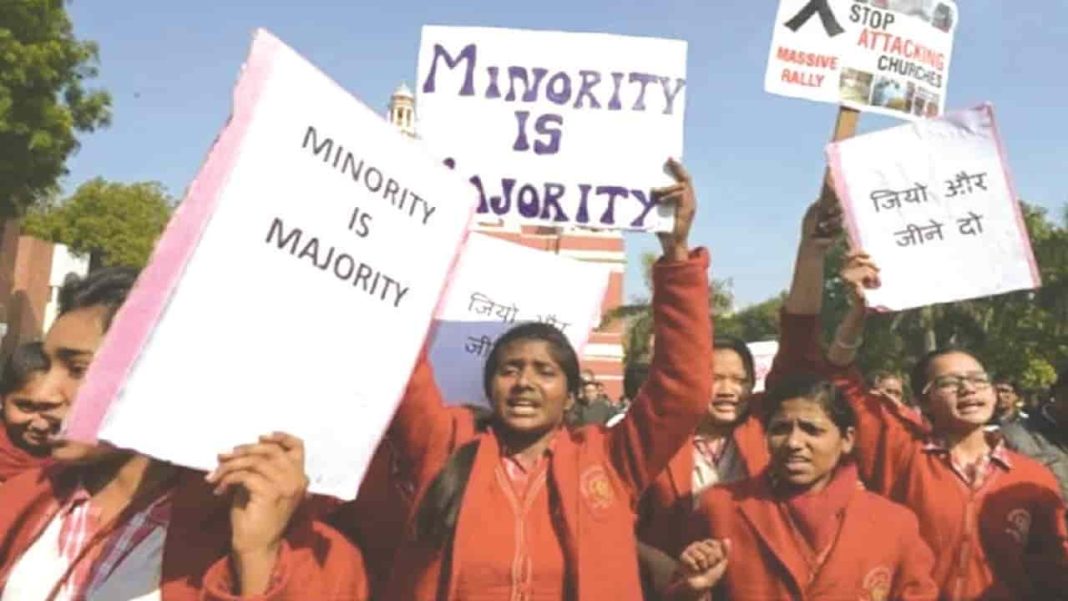 Recently, the centre sought time from the top court to take a considered view, in consultation with all states, Union Territories and other stakeholders, on the demand of according minority status to Hindus in states where they are less populated.

The apex court was dealing with a petition filed by advocate and BJP leader Ashwini Kumar Upadhyay seeking grant of minority status based on the population in every state. In his plea, Upadhyay contended that minority rights as well as governmental schemes and programmes were available only to the notified minority communities which include Muslims, Christians, Sikhs, Buddhists, Parsis and Jains. He claimed that Hindus are equally entitled to such benefits in states where their number is low.

Relying on the 2011 Census, it was alleged in the petition that Hindus are merely 1% in Ladakh, 2.75% in Mizoram, 2.77% in Lakshadweep, 4% in Kashmir, 8.74% in Nagaland, 11.52% in Meghalaya, 29% in Arunachal Pradesh, 38.49% in Punjab and 41.29% in Manipur; still their minority rights in these places have been siphoned off illegally and arbitrarily inasmuch as the government failed to notify them as a “minority” under Section 2(c) of the National Commission for Minorities Act, 1992. This, Upadhyay contended, deprived Hindus of their fundamental rights guaranteed under the Constitution.

In its affidavit in October, the Ministry of Minority Affairs said that 14 states—Punjab, Mizoram, Meghalaya, Manipur, Odisha, Uttarakhand, Nagaland, Himachal Pradesh, Gujarat, Goa, West Bengal, Tripura, Uttar Pradesh and Tamil Nadu, and the Union Territories of Ladakh, Dadra & Nagar Haveli, Daman & Diu and Chandigarh—had already furnished their views on this issue. A reminder had been sent to the remaining 19 states/UTs to furnish their responses at the earliest. However, some had requested additional time to have wider consultations with all stakeholders.

Citing that the matter was “sensitive” and would have far-reaching ramifications, the centre sought time to enable the states/UTs and other stakeholders with whom the consultative meetings have already been held to finalise the matter.

In August, the ministry informed the Court that the centre had already held meetings with Punjab, Nagaland, Meghalaya, Mizoram, Arunachal Pradesh, Haryana, Uttar Pradesh, Himachal Pradesh, besides the UTs of Jammu & Kashmir and Ladakh. It was further informed that inputs on the issue had also been taken from the home ministry, Department of Legal Affairs under the law ministry, the Department of Higher Education, the National Commission for Minorities and the National Commission for Minority Educational Institutions. Adding that the consultative meetings with remaining states/UTs were yet to be held and their response is awaited, the centre urged for more time.

Earlier in March, the centre had submitted before the top court that the Parliament and the state legislatures have concurrent powers to enact a law to provide for the protection of minorities and their interests. Citing the example of Maharashtra that had notified Jews as a minority community in July, 2016, the centre said that state governments can also declare a religious or linguistic community as a minority community within that state. The government then sought that the petition be dismissed for being wholly untenable and misconceived in law.

However, later in May, the centre took a somersault on the issue of granting minority tag to Hindus and said that as the matter has far-reaching ramifications throughout the country, some time was required to enable it to make up its mind. Recalling its earlier affidavit, the centre said that though it was vested with the power to notify minorities, any stand taken without detailed deliberations with the stakeholders may result in unintended complication for the country.

Section 2(c) of the National Commission for Minorities Act, 1992, says that only those communities are regarded as minorities which are notified as such by the central government. Subsequently, the centre issued a notification in October 1993 by which Muslims, Christians, Sikhs, Buddhists and Zoroastrians (Parsis) were notified as minority communities. Jains were also added to the list in 2014.

In 2003, an 11-judge bench of the top court in TMA Pai case held that religious and linguistic minorities have to be considered state-wise for the purposes of establishing and administering educational institutions as per Article 30 of the Constitution. Referring to the TMA Pai ruling, the top court in Bal Patil vs Union of India (2005), clarified that the unit for determining the status of both linguistic and religious minorities would be “state”.

Though India is a land of multifarious religions and languages, a community which is in majority in one state may be in minority in another state. It is to allay the apprehensions and fears in the minds of those communities that the framers of the Constitution provided special guarantee and protection. But the issue around minority status is a complex one and often dominates political debates. Against this backdrop, the ruling in Upadhyay’s petition is likely to have a significant impact.