A study has found that eight out of 10 inmates in prisons are undertrials. A majority of them are illiterate and poor with an alarmingly high number being Muslims, Dalits and Adivasis 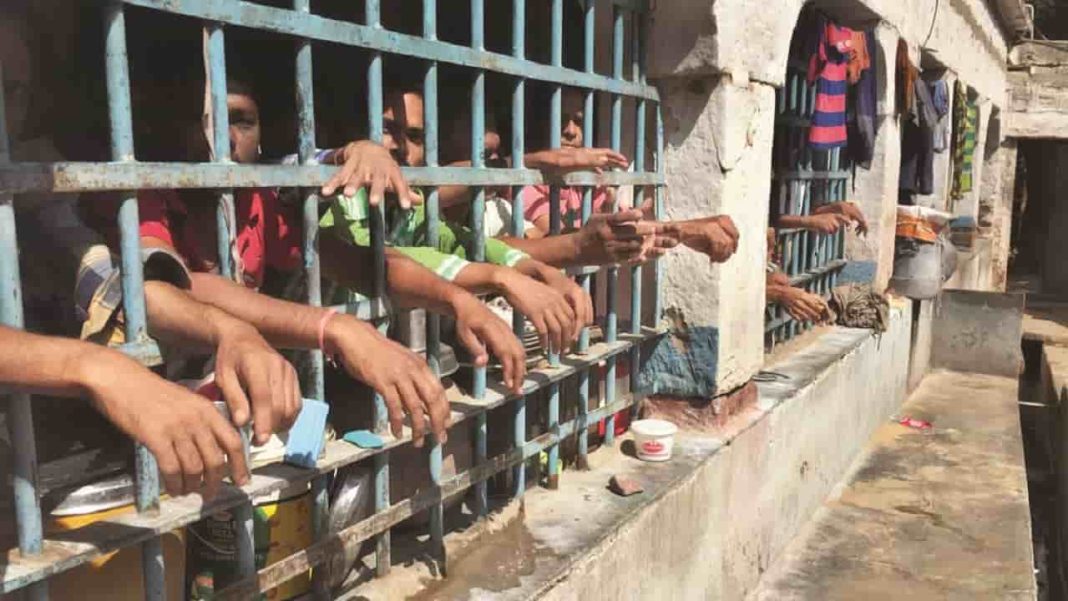 March 24, 2020, saw India going into shutdown mode in four hours or so for the first Covid-19 lockdown. Panic-stricken people flocked department stores to hoard grain, oil, soap and other essentials. Hand sanitizers and masks were the in-thing. Not that they have gone out of fashion after two years, but yes, people have learned to live with the virus, which is returning with newer strains and tricks. Work from home became the norm, and those who had to commute to work needed passes from district authorities before venturing out.

The legal system went into virtual mode to ensure the wheels of justice, already under attack for being too slow, didn’t catch the dangerous flu, Chinese or otherwise. To minimise the spread of Covid in jails, the Supreme Court ordered that they be decongested. Prisoners not serving long sentences were given furlough, and the police were asked not to arrest people and add to the numbers. All of this, like Covid data, was in the news streamed on mobiles or on TV because the delivery of newspapers took a break. Residents’ welfare associations turned into an extra-judicial force banning newspaper delivery boys, Swiggy delivery men and even domestic help, so as to avoid the dreaded Covid-19 vectors.

As free masked citizens, many of us spent Covid trapped in too many phobias, manias and solitude’s anomie. But spare a thought for the incarcerated, captive, yes, for crimes they may have committed, but yet to be given the fair trial that would uphold the principle of innocent until proven guilty. The right to a fair trial, enshrined in Article 21 of the Constitution, also stipulates a “speedy trial”, but letters and words written in spirit don’t answer for delays in real life.

Indian prisons are notorious for being jam-packed, not only because of pendency of cases, but also because the Process is the Punishment, as pointed out by multiple judges in the recent past. It is rare to find a prison that is not overflowing with people, at least in this country.

While we may not know the real number of Covid casualties in India, since the government has contested the WHO data, we do know for a fact that prison decongestion, much touted, praised and headlined, didn’t work on the ground. Yes, at least in 2021.

The India Justice Report for 2021 has found that it was business as usual with 1.47 crore people being arrested in 2021 compared to 1.39 crore in 2020. An increase of 7.7 lakh. The year saw the second wave of Covid, when hospitals found that their oxygen supply could not keep up with the droves of Covid-hit people landing up at their gates. Many died pitiful deaths without getting the requisite oxygen and were cremated as per NDMA norms without family being remotely near them.

The India Justice Report is a collective of organisations working towards reform of the justice sector and comprises the Centre for Social Justice, Common Cause, Commonwealth Human Rights Initiative, DAKSH, TISS–Prayas, Vidhi Centre for Legal Policy and How India Lives.

Across the country, overall prison occupancy increased from 118% to 130%. With the second wave’s onset, new directions were issued to limit arrests and decongest prisons, but only 93,526 inmates were released in 17 states/UTs between March and July 2021. As of December 2021, 19 of 36 states and UTs had overcrowding ranging from 185% in Uttarakhand to 100.2% in Rajasthan. Among Union Territories, Dadra & Nagar Haveli and Daman & Diu, Delhi and Jammu & Kashmir had over 100% occupancy rates.

Now comes the good news. Since 2019, the India Justice Report has been reporting on justice delivery in India. The analysis for 2021 is not without news to cheer.

The shutting down of courts, restrictions on moving inmates from prison to court for physical appearances and the considerable loss of court time did add to the lengthening of criminal trials, securing bail and accessing legal aid. But in the pivot to video conferencing necessitated by Covid, between 2019 and 2021, more jails came up with video conferencing facilities. With this, 1,102 jails had the infrastructure compared to 808 jails previously. Arunachal Pradesh, Assam, Goa, Haryana, Meghalaya, Sikkim, Tripura, Uttarakhand and West Bengal, and the UTs of Puducherry, Chandigarh, Delhi, Dadra & Nagar Haveli and Daman & Diu recorded 100% coverage across their prisons.

In contrast, Nagaland, Manipur, the Andaman & Nicobar Islands and Lakshadweep had video conferencing in less than half their prisons. The worst off was Lakshadweep, where none of its four prisons had this facility.

Among the prison inmates, undertrial prisoners comprised 77%, a per cent higher than in 2020. This means that out of 10 prisoners, eight are undertrials, a shockingly large number.

It is not that the plight of the disproportionately high number of undertrials is not known or has not been talked about. Prime Minister Narendra Modi has twice asked the judiciary to ensure that undertrials get justice. At the inaugural session of the first All India District Legal Services Authorities meet in New Delhi on July 30, Modi asked the assembled district judges, as chairmen of district level undertrials review committees, to expedite their release.

At a joint conference of chief ministers and High Court chief justices in April, Modi had raised the sorry state of these undertrials. He noted that some 3.5 lakh prisoners in the country are undertrials and come from poor families. Invoking humanitarian values, he appealed to the chief ministers and chief justices of High Courts to give priority to their release. While 25.2% of undertrials are illiterate, the Report noted an alarmingly high number of them are Muslims, Dalits and Adivasis.

Compared to 2010, the number of undertrial prisoners has nearly doubled in 2021, going from 2.4 lakh to 4.3 lakh. Barring the Andaman & Nicobar Islands, Arunachal Pradesh, Mizoram and Tripura, the undertrial prison population in all other states exceeded 60%. Delhi’s prisons had 91% undertrials, i.e., 9 out of every 10 prisoners await completion of their trial. Some 24,033 undertrials have been in prison for 3 to 5 years while 11,490 have been confined for over 5 years. Uttar Pradesh and Maharashtra accounted for the lion’s share of undertrials confined for over 5 years.

Undertrials are usually suspects rounded up by the police on the word of either a complainant or an informant. The rounding up of suspects is far from a justice-for-all trope. The number of undertrials and their composition is not a surprise, based as it is on biases that the law has to overrule.

The idea of incarcerating a felon is meant in modern practice to reshabilitate and not to punish alone. But that, again, is proving to be difficult due to the absence of correctional staff. The lack of probation officers, welfare officers, social workers and even psychologists makes rehabilitating prisoners beyond reach. As many as 11 states and UTs across 153 jails, handling a total of 18,887 inmates, have no sanctioned positions for correctional staff. Barring Uttarakhand, Ladakh and Manipur, none of the other states or UTs have sanctioned positions since 2019. The vacancies are as high as 60 to 100% in seven states/UTS. Both Haryana and Goa have records of no correctional staff against their sanctioned strength. Punjab has no correctional staff and indicates a 100% long-term vacancy.

The lack of prison medical staff, including doctors, lab technicians, pharmacists and compounders is also troubling. The Report says 14 states have more than 40% vacancies; Goa has 84.6% vacant positions, West Bengal 66.8% and Karnataka 61.3%. Gujarat and Tamil Nadu have maintained low vacancies.

Shockingly, while the Model Prison Manual mandates one doctor for every 300 prisoners, in reality, a single doctor serves 842 prisoners on an average nationally. Uttarakhand which has 6,921 inmates across 11 jails has only one doctor against 10 sanctioned posts. Barring the Andaman & Nicobar Islands, Arunachal Pradesh, Delhi, Manipur and Meghalaya, no state or UT even attempts to touch the Manual’s benchmark.

The overall vacancy level is also stark. Half the country’s states and UTs function with 25% vacancies in their jail staff. Sikkim at 52.3%, Jharkhand at 59.3% and Ladakh at 83.1% recorded the highest vacancy levels.

Ajmal Kasab was the lone terrorist who was caught, tried and hanged after the 26/11 attacks on Mumbai. A public prosecutor made headlines saying Kasab was being fed biryani by the government, a fact which has since been denied and forgotten.

The people whose lives, and whose relatives’ lives are stuck between court, jail and the intervening commute have no hope apart from the judge’s weary hand delivering them justice. Unlike the millions who have been vaccinated against Covid, the fog of deliberate insensitivity towards the plight of those in prison needs more than a vaccine.

Life in prison won’t let you live nor let you die. But isn’t justice meant for all?