The PFI has joined a list of 39 organisations that have been banned in India. Invoking UAPA, the centre said the PFI and its affiliates were linked to the IS and propagating anti-national sentiments 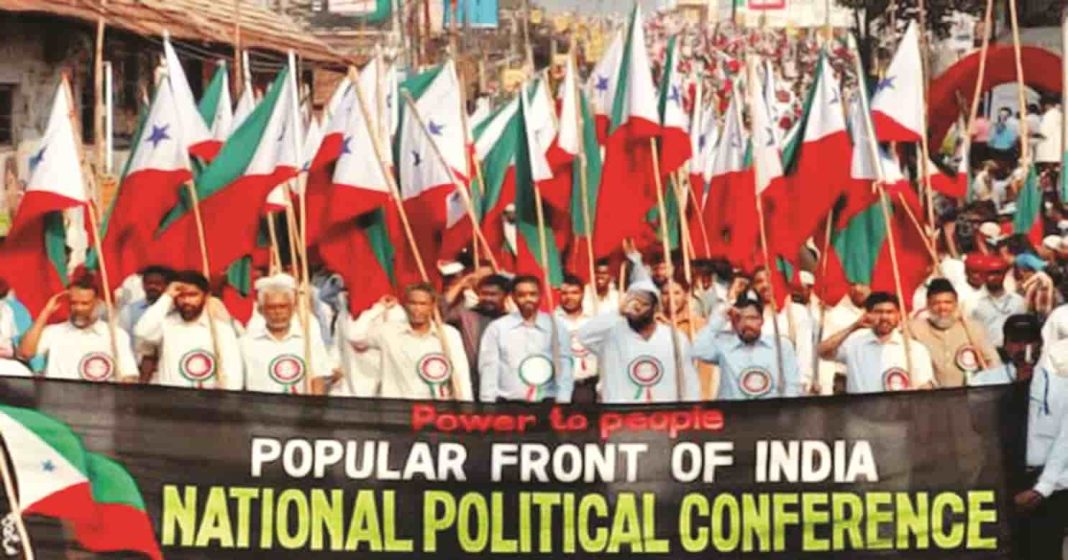 On September 28, 2022, the government declared the Popular Front of India (PFI) as an unlawful association and temporarily banned it for five years under the Unlawful Activities (Prevention) Act (UAPA), 1967. With this, the PFI joins a list of 39 organisations that have been banned in the country. These include the Khalistan Zindabad Force, Khalistan Commando Force, International Sikh Youth Federation, United Liberation Front of Assam and the Students’ Islamic Movement of India.

The ban on the PFI followed years of constant run-ins with the police of various states. On September 22 and 27, the National Investigation Agency (NIA), Enforcement Directorate (ED) and police conducted raids on party offices of the PFI in various states. In the first round of raids, 106 people were arrested and in the second, 247 were arrested or detained. Investigating agencies claimed that they had got enough evidence against the PFI. After this, the Ministry of Home Affairs declared the PFI as an “illegal” organisation under the UAPA.

The Union government reasoned that the organisation was prejudicial to the integrity, sovereignty and security of the country and cited PFI’s alleged connection with terror organisations like the Students Islamic Movement of India, Jamaat-ul-Mujahideen Bangladesh and Islamic State of Iraq and Syria.

While clarifying the relationship between PFI and these organisations, the home ministry said that the PFI and its affiliates function publicly as socio-economic and political organisations, but work towards undermining the concept of democracy by radicalising certain sections of the society under covert agendas. It also said they show gross disrespect towards the constitutional authority and structure of the country. It alleged that they were likely to disturb the atmosphere of peace and communal harmony and encourage extremism in the country.

anti-national and anti-social activities. PFI has often been in violent clashes with the RSS in parts of Kerala and Karnataka.

In January 2011, the Kerala police filed a chargesheet against 27 alleged PFI activists for severing the hand of a Kerala professor who had allegedly made derogatory references to the Islamic prophet Muhammad.

In 2012, the Kerala government informed the Kerala High Court in an affidavit that the PFI had active involvement in 27 murder cases, mostly of cadres of RSS and CPI-M. In 2014, it again submitted before the Kerala High Court that activists of the NDF/ PFI were involved in 27 communally motivated murder cases, 86 attempt to murder cases and 106 communal cases in the state. The affidavit was filed in reply to a petition filed by Thejas, spokesperson of the PFI in the state, challenging the refusal of the government to give government advertisements to the daily.

In April 2013, the Kerala Police raided a training camp in Narath, Kunnur, and arrested 21 activists of the PFI. Two country-made bombs, a sword, raw materials for making bombs and pamphlets in the name of PFI were seized by the police. A document with names of several leading personalities and organisations was also seized, which police suspect is a hit-list.

In 2015, the PFI staged a rally in Karnataka’s Shimoga during which stones were thrown on vehicles, as alleged by the locals. Three people riding a bike were stabbed by PFI activists and 56 arrests were made in clashes following it.

In March 2015, intelligence agencies reported that the role of the PFI in the 2011 Mumbai bombings, 2012 Pune bombings and 2013 Hyderabad blasts had been found. These were denied by the PFI. In November 2017, the Kerala police identified six members of the PFI who had joined the Islamic State, possibly by moving to Syria using fake passports.

On January 1, 2020, Union law minister Ravi Shankar Prasad stated that PFI may have played a part in the violence surrounding some protests against the Citizenship (Amendment) Act (CAA). The ED also informed the Ministry of Home Affairs and is investigating a Prevention of Money Laundering Act probe.

The Kerala High Court on September 23 initiated a suo motu contempt of court case against the PFI for doing a flash hartal, which was strictly banned by the Court. A division bench of Justices AK Jayasankaran Nambiar and Mohammed Nias CP pulled up the organisation.

Earlier, on July 14, the Bihar police arrested three members of the PFI and the Social Democratic Party of India in Patna and seized a seven-page document on an alleged plan to establish the rule of Islam in India by 2047.

In Mumbai, on September 29, Maharashtra ATS Chief Vineet Agarwal informed that the PFI does not have the right to regroup or protest on any platform except on the legal platform post their ban. He too said that the banned organisation had plans to turn India into an Islamic country by 2047.