Following a clutch of petitions, the Court has said that there can be no comparison between the kirpan and turban of Sikhs and the hijab of Muslim women as the former was allowed under the Constitution 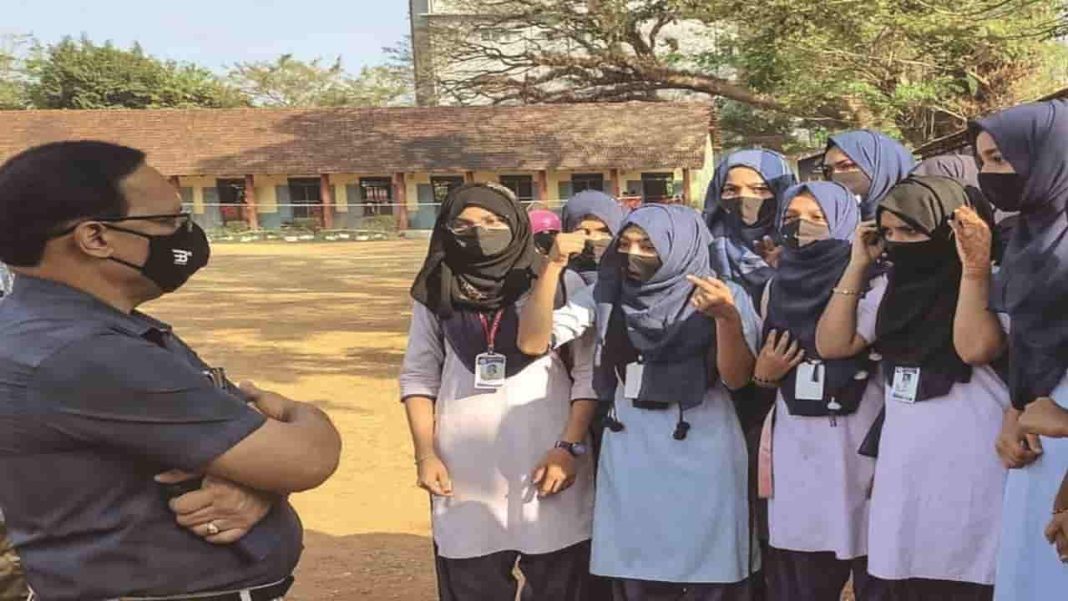 “India is a country in which every great religion finds a home.”

India is a land of many religions, cultures and traditions. Unity in diversity has always been recognised as its greatest strength. However, with the ongoing hijab row, we seem to have forgotten what once reigned supreme in our country—multiculturalism.

The debate over wearing the hijab (headscarf) in educational institutions, which caused a furore in Karnataka earlier this year, has brought the focus back on the scope and ambit of religious freedom guaranteed under the Constitution. The issue is currently being considered by the top court, with many petitioners urging it to permit them to wear hijabs inside educational institutions.

The controversy began in Karnataka’s Udupi district with several Muslim students staging a protest against the college authorities for not allowing them to attend classes wearing hijabs on the ground that it was a violation of the uniform policy of the college. Hijab is a headscarf worn by Muslim women to cover their head, neck and chest in order to protect their modesty and privacy.

Within a few days, the controversy spread to other schools and colleges across the state, with a large group of Hindu students staging a counter protest by sporting saffron scarves in their educational institutes.

The state government intervened by passing an order in furtherance of the Karnataka Education Act, 1983. The order stated that all government school students must wear the uniform decided by the state government, while students of private schools must do so as stipulated by the school management. The order further stated that if there was no such dress code, students can wear a dress that will not affect equality, integrity and law and order.

Following the order, a petition was filed in the Karnataka High Court against the ban on wearing hijab in educational institutions. It was contended that wearing a hijab is an essential religious practice under Islam and that its ban inside classrooms was violative of students’ fundamental right to profess their religion under Article 25 of the Constitution.

In March this year, a three-judge bench of the Karnataka High Court, comprising Chief Justice Ritu Raj Awasthi and Justices Krishna Dixit and JM Khazi, upheld the ban on wearing hijab in the state’s educational institutions. They observed that wearing the hijab does not form part of an essential religious practice in Islamic faith and thereby, does not merit protection under the Constitution.

The Court further observed that prescription of a school uniform was only a reasonable restriction allowed under constitutional reforms which the students cannot object to and that a uniform dress code, in fact, promotes the principles of secularism. “Prescription of school dress code to the exclusion of the hijab, bhagwa, or any other apparel symbolic of religion can be a step forward in the direction of emancipation and, more particularly, to the access to education,” the Court underscored.

Dissatisfied with the Karnataka High Court ruling, a clutch of petitions was filed before the apex court challenging the judgment, which is pending consideration before the bench of Justices Hemant Gupta and Sudhanshu Dhulia. During the course of hearing, several counsels opposed the High Court’s order, with some contending that the hijab worn by Muslim women must be given the same protection as the kirpan and turban of the Sikh community.

“If a turban is allowed in school, why not the hijab? What’s the difference? Apart from the fact that it got constitutional protection 75 years ago. You’ll never tell a Sikh boy to take off his turban,” argued Senior Advocate Colin Gonsalves, who is representing one of the petitioners in the case. He further argued that several observations made by the High Court are deeply offensive in nature and hurtful to those who follow the Islamic faith.

He also took strong objection to schools being referred to as “qualified public space” in the judgment, a concept that was novel to Indian jurisprudence. “A Muslim lawyer coming to court in a hijab can then legitimately be told to take of their hijab because this is a ‘qualified public space’ and we have had complaints for this. This is very dangerous,” he submitted.

Emphasising the right to privacy, Senior Advocate Kapil Sibal, challenging the High Court order, argued that the hijab was a part of persona and a cultural tradition and that a student does not forego fundamental rights while stepping inside the educational institution. “You cannot destroy me. It is a part of my cultural tradition. Does my right stop at the college gate?” said Sibal.

According to Senior Advocate Yusuf Muchhala, the High Court ruling is “highly objectionable” inasmuch as it relied on one interpretation of the Quran against another to give a finding on the essentiality of the hijab.

During the long exchanges, the Court asked whether a person’s right to practice religion be taken to a school where a uniform is prescribed. In response to the comparison being drawn between the kirpan and the hijab, the top court had earlier remarked that the hijab of Muslims may not be appropriate as wearing a turban and carrying a kirpan has been recognised by the Constitution. “So don’t compare practices,” the Court remarked.

It is pertinent to mention that Article 25 of the Constitution, which guarantees to all persons the freedom of conscience and the right freely to profess, practice and propagate any religion subject to public order, morality and health, recognises wearing the kirpan as part of Sikh religion.

In 2015, the Kerala High Court in Nadha Raheem vs Central Board of Secondary Education observed that religious sentiments must not be hurt, but at the same time, discipline must also not be compromised. It  directed candidates wearing hijab to reach the examination hall half-an-hour prior for the invigilator to examine. In this case, the dress code prescribed for examination by the CBSE was a half-sleeve kurta/salwar to ensure that no cheating by means of electronic gadgets wired or camouflaged to the body takes place during the exam.

Coming back to the hijab controversy, the ball is now in the court of the Supreme Court to determine whether wearing the hijab constitutes an essential religious practice under Islamic faith. The test of essential religious practice was laid down by it in The Commissioner, Hindu Religious Endowments, Madras vs Shri Lakshmindar Tirtha Swamiyar of Shri Shirur Mutt (1954). A seven-judge bench had held that what constitutes the essential part of a religion is primarily to be ascertained with reference to the doctrines of that religion itself.

The top court is expected to deliver a judgment that restores communal harmony in the country and secures the future of the nation.

Did you find apk for android? You can find new Free Android Games and apps.
Share
Facebook
Twitter
Pinterest
WhatsApp
Previous articleThis is the Limit
Next articlePlea challenging constitutional validity of National Commission for Minorities Act before Supreme Court withdrawn