An Iowa court judgment ordering a teen victim of rape to pay $1,50,000 to her rapist’s family has brought into focus restitution law, which activists call harsh. In India, courts have often sided with the victim 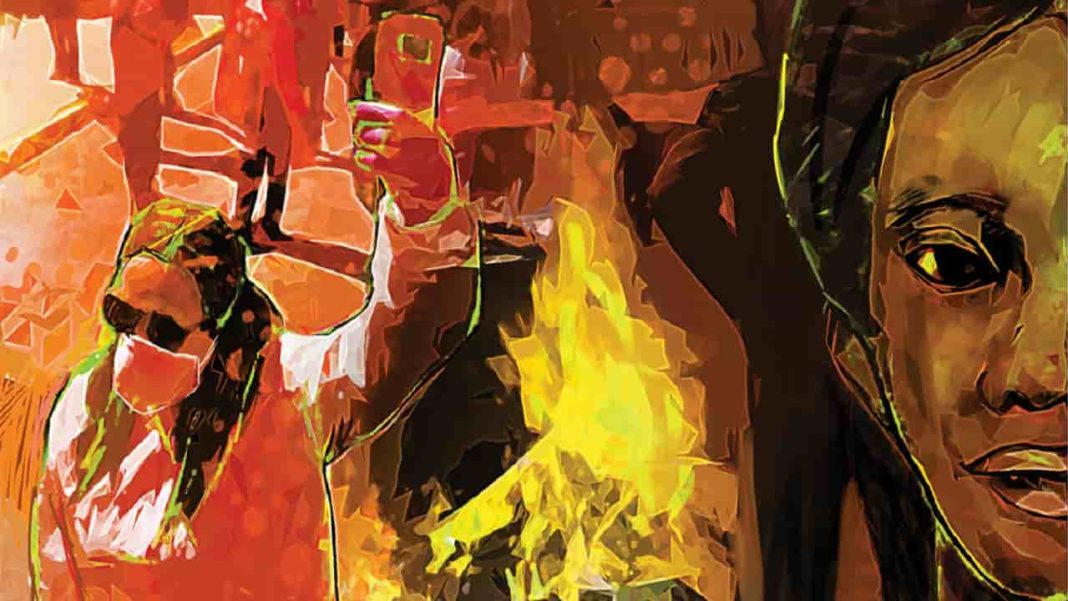 In the last two weeks, huge protests have erupted over a shocking judgment by a US court. In the case, a trafficked and raped teenager was ordered to pay a compensation of $1,50,000 to her rapist.

The court in question, in Iowa, sentenced the 17-year-old girl in the second week of September 2022 to five years of probation for stabbing her rapist to death. Additionally, she was ordered to pay $1,50,000 to the tormentor’s family. This judgment shook many people globally as it was inconceivable that the Des Moines Attorney’s office would try a teen sex slave for murder—admittedly for killing her tormentor out of vengeance.

Matthew Sheeley, one of attorneys, argued that her actions were directly linked to her status as a victim of human trafficking. Arguing against the requirement that she pay the deceased’s estate, he told the judge: “I don’t think the Iowa legislature intended to require a 15-year-old girl to pay $150,000 for her rapist’s estate.” But the trial court was of the opinion that the Supreme Court of the concerned jurisdiction upheld the restitution law when it was challenged earlier before the appellate court.  According to the judge, the verdict gives the victim a second chance. Many observers around the world, however, felt the restitution clause was unnecessarily harsh.

The victim was 15 years old at the time of the commission of the offence. She was initially charged with first degree murder as she stabbed the deceased 37 times to death. But she herself later admitted to killing the father of two, aged 37, by negligent homicide and willful injury as she was furious with revenge and rage. The victim was, in fact, sentenced to a deferred 20-year prison term that will be expunged if she successfully completes five years of closely supervised probation. This means that she won’t go to jail unless she breaks the terms of her probation and other sentences. The prosecutor characterised the sentence as merciful for a teen that had been horribly abused.

According to her attorneys, the deceased should not be compensated as the teen was the real victim of the incidents that led to the homicide and the deceased was at fault by causing her to initiate willful injury and harming him enough to die.

According to many human rights activists, if the Iowa law demands restitution through huge compensation in such cases where the accused is a victim of rape and illegal human trafficking, that restitution is cruel and unusual. The question that arises is whether a rape victim should be forced to pay despite the fact that she has used lethal force, though out of revenge, to prevent future rapes.

Iowa is not among the dozens of states that have what is known as a Safe Harbor law that grants victims of human trafficking at least some degree of criminal immunity. Iowans can, however, avoid being convicted of violent crimes if they prove that they faced imminent serious injury or threat to their life at the time of their self defense or private defense, which was the case here. Why did the prosecution then charge the victim of the rape or human trafficking for killing the rapist?

The prosecutors successfully argued that the deceased was not an immediate danger to the victim because he was asleep when he was stabbed. Her defense attorneys state that she was caught in a sex agreement between her former boyfriend and the man she killed and was, therefore a victim in the human trafficking. The events leading to culpable homicide involved even the business of drugs and other narcotics as the defense lawyers stated that her broker/or former boyfriend, using a knife, forced her to go to the deceased’s apartment to pick up marijuana worth $50 in exchange of sexual services. However, the court was compelled to apply the restitution laws applicable in Iowa and ordered the victim/accused to pay the huge amount as restitution.

While crimes do not pay, restitution can compensate victims for their losses, making it an important tool for compensation in any jurisdiction. Crime-victim compensation laws exist throughout the US, requiring convicts to pay restitution to their victims. States require judges to provide a justification on record whenever they refuse to order restitution or order only partial restitution. In any criminal justice system, victims are the most aggrieved parties. Although restitution was available in the US since 1925, courts were reluctant to apply it.

As in India, victims’ rights have been continually neglected and ignored in the criminal justice system until 1970. Throughout the 1980s, various movements brought the plight of crime-victims to the attention of legislators. As various laws have been introduced in this regard, US courts have widely used restitution laws not only to disgorge unlawful gains, but also to compensate victims for their actual economic, emotional and psychological losses. US courts no longer make precise calculations when determining restitution, but instead, use fudge factors. This resulted in it becoming a punitive mechanism, rather than a primarily restorative one.

As in this case of Iowa, $1,50,000 restitution seems a severe punishment as it becomes a huge financial burden for an unemployed teenager with little educational background. Of course, the deceased’s family should also be adequately compensated as they are also victims. Justice will be inadequate and incomplete if the victim, whether of murder, homicide or rape, is not compensated, but surely not by the victim of a rape who murdered the rapist out of immense fear? Isn’t it the duty of the State to pay compensation as long as there is a provision for it? In various instances, people convicted of crimes across the US are required to pay the costs of the investigation and prosecution without considering what the costs are.

Of late, India has developed various rules and principles in this respect. In the past, when a crime was reported and a criminal complaint filed, all attention was focused on the accused, completely ignoring the rights and prospects of the victims. The victims were referred to as “forgotten entities” or “marginalised entities”. Typically, the State ignores rehabilitation because of the financial implications.

However, such an attitude by the State makes things worse, especially in the case of sexual assault victims, who sometimes lose their jobs, become pregnant, suffer psychological trauma or are exiled from society.

As Justice Krishna Iyer in Maru Ram & Ors vs Union of India & Ors, rightly said, restitution must not be rooted in barbarism, but in reparation for the harm inflicted on the victim by the wrongdoer by the reduction of loss caused by the wrongdoer. Criminal proceedings are generally initiated for and by victims of crimes. As defined in Section 2(wa) of the Criminal Procedure Code, 1973, a victim is someone who has suffered loss or injury because of an act or omission for which the accused was charged.

As awareness of the plight of victims grew, efforts were made to defuse the situation. So Section 357-A of the Code of Criminal Procedure (CrPC), 1973 was inserted by Act 5 of 2009 providing victim compensation.

The Delhi High Court in Karan vs State NCT of Delhi recently, devised a formula for determining the amount of compensation to the victim on the basis of impact report. The victim must be compensated in accordance with the accused’s ability to pay. This is contrary to the judgment of the Iowa court.

The Delhi State Legal Services Authority is required to submit Victim Impact Reports on a regular basis in every criminal case after a summary inquiry has been conducted. According to the Court, Section 357(3) of the CrPC is mandatory as the word “may” actually means “shall”.

In Hari Singh vs Sukhbir Singh, the Supreme Court decried the failure of Indian courts to compensate victims of crime. Moreover, the Court referred to Ankush Shivaji Gaikwad vs State of Maharashtra which directed the courts to consider Section 357 of the CrPC in any criminal proceeding and to provide valid reasons for not awarding compensation. It was recommended by the Supreme Court that all courts liberally exercise their power under Section 357 to serve justice’s purposes.

There was a recent case decided by the Supreme Court in Kirti vs Oriental Insurance Company Ltd (supra) that also contributes to compensation law. It addresses a claim for compensation in a car accident; Justice NV Ramana summarised his opinion on calculating the notional income for housewives and giving them future prospects for the purpose of compensation. As a further progressive step, the Supreme Court further interpreted Section 357A of the CrPC to include a provisional compensation in Suresh vs State of Haryana where the Court upheld the conviction of the appellants who were charged with kidnapping, murder and concealing evidence.

Furthermore, the Court held that Section 357A extends its power to the court to order the State to compensate a victim whenever Section 357 compensation is not appropriate or when the case ends in acquittal or dismissal. The inclusion of this provision was recommended by the 154th report of the Legal Commission. The Supreme Court ordered the State Haryana State Legal Service Authority/state government to pay interim compensation to victims’ families of Rs 10 lakh.

A victim protection programme includes compensation and aims to protect her interests, including the rehabilitation. In Bodhisattwa Gautam vs Subhra Chakraborty, the Supreme Court ruled that courts can award compensation as part of their overall jurisdiction. Indian courts reiterate that justice can only be served when the victims receive adequate compensation for their losses and have taken proactive measures to ensure that even their identity or name should not be published or disclosed during the proceedings or afterwards, thus protecting them.

Central legislation, including POCSO, has clearly stated that victims are entitled not only to compensation, but also to rehabilitation services. As a result of this, a ray of hope has entered the lives of these victims.

—Saju Jacob is an advocate practising before the Supreme Court