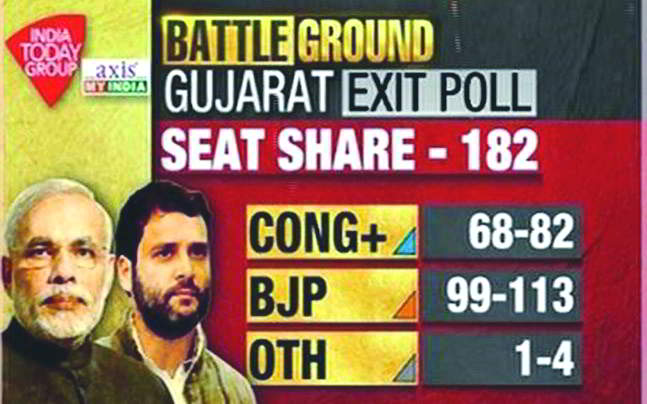 Exit polls have become a compulsory exercise for any media outlet worth its name. They went wrong in Bihar and horribly wrong in the UP elections but their allure is so irresistible because they have become to a media outlet what the three-pointed star is to a car owner—a status symbol. Gujarat proved to be another flop show for pollsters with exit poll predictions being way off the mark and badly affecting their credibility. The superstar of exit polls is Today’s Chanakya—it had accurately predicted the results of elections in Delhi, MP, Rajasthan and came close in the 2014 general election, but this time it had egg on its face, along with the channel that used its services, News24, having predicted 135-plus seats for the BJP and for the Congress just 47. Arnab Goswami’s pro-establishment Republic TV’s poll, done by C-Voter, had given the BJP 115 and the Congress 65 while rival Times Now had predicted 109 for the BJP. Even NDTV’s poll of polls called it 112 for the BJP while ABP News gave the BJP 117. There is a lesson here for media outlets—the India Today model. The channel went to town claiming it had got the results bang on with its exit poll but it performed a clever twist. Its prediction gave the BJP 99-113 seats and the Congress 68 to 82! Giving such a wide margin of seats seems to be the key where exit polls are concerned.

The government is facing heat from the International Federation of Journalists (IFJ)—a global federation of journalists’ trade unions—for the arrest of a French journalist in Kashmir. The journalist, Paul Edward, was arrested by the Kashmir police under Section 14B of the Passport Act and sent to jail for three days before he got bail. His passport and camera have been confiscated. An official from the French embassy in Delhi has reached Srinagar. Edward was there to shoot a documentary and was arrested on a technicality—he had a business visa—and was accused of filming pellet victims and interviewing Farooq Ahmad Dar who was used as a human shield by the army in April. Srinagar’s police chief has said that “you can’t have a business visa and make a film on pellet victims and interview Dar or film missing persons’ relatives”. However, the arrest only seems to have attracted unwanted publicity internationally—the IFJ stated: ”It is impossible for the media to report on Kashmir due to non-issuance of journalist visas. The IFJ urges the Indian government to ensure that it respects international standards of dealing with journalists.” The Indian Journalists’ Union (IJU) has also  demanded that the government stop “harassing” the French journalist. 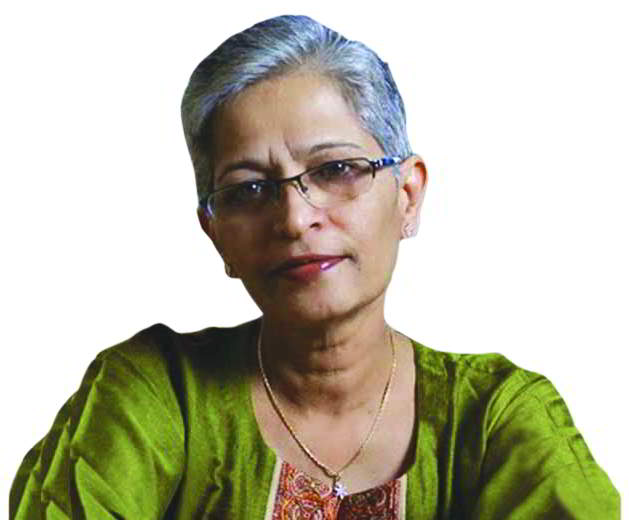 Journalists seem to be the new soft targets as figures released in the Lok Sabha last week suggest. The report, released by Minister of State for Home Hansraj Ahir, did not mention the three journalists murdered in 2017—Gauri Lankesh in Bengaluru, and Santanu Bhowmik and Sudip Datta Bhowmik from the Bengali media in Tripura—but it revealed that 189 FIRs were registered and 114 arrested for attacks on journalists between 2014 and 2016 (figures for 2017 were not available). This is a significant rise over previous years. A total of 41 people were arrested for attacks on mediapersons in 2016 while a similar number of arrests took place in 2015. The figure for 2014 showed 114 cases registered for attacks on mediapersons. A majority of the attacks, the report revealed, took place in Uttar Pradesh which was followed by Madhya Pradesh.

When veteran journalist Prabhu Chawla hosts an evening to felicitate the power women of today, he does it in style. Union Home Minister Rajnath Singh—fresh from his party’s twin electoral wins in Gujarat and Himachal Pradesh—turned up to grace the Devi Awards, organised by The Sunday Standard at Delhi’s ITC Maurya on December 18. The evening progressed as expected, till a panting Chawla ran up to the bar minutes before the minister was supposed to make his delayed entrance. Before his guests could realise what was happening, the bar was shut—and not a drop was to escape the watchful eyes of the bartender till the minister was safely on his way out. After all, you never know who might come up with drunk barbs aimed at the powers-that-be!