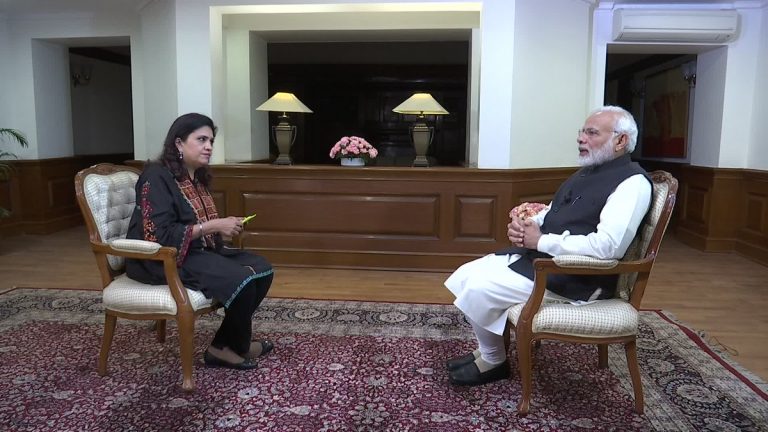 But the unkindest cut of all came from Congress President Rahul Gandhi, yesterday’s “pappu”(wimp) who has become today’s gladiator. He took a swipe at the interviewer, calling her “pliable”, and the interview itself being an orchestrated PR job. Journalists like NDTV’s Vikram Chandra and Nidhi Razdan immediately rallied to Prakash’s defence on Twitter, arguing that Rahul’s language was indefensible and a slur on the press. Ironically, their channel had earlier done a “fact-check” on Modi’s claims on various achievements and found him to be “flexible with the facts”.

However, some editors, among them The Hindu’s venerable N Ram, and The Print’s Shekhar Gupta, while not defending Rahul personally, believe that journalists have been called worse names like “presstitutes” by BJP trolls, and that Modi ducks press conferences, preferring instead, to be interviewed by reporters of his choosing. It is true that he hand-picked Prakash for the second time in a row for a 95-minute TV sit-down in the midst of the Rafale deal controversy. An earlier interview conducted by Prakash with Dassault Aviation Chief Executive Officer Eric Trappier, which is repeatedly tom-tommed by BJP spin doctors as having exonerated the government of any wrongdoing, had also come under sharp criticism from renowned defence analysts like Ajai Shukla for failing to address vital issues.

When The Crow Pecks

Fact-checking by mainstream media is quickly emerging as a new trend in the free world where fake news and social media trolling are taking a heavy toll of the truth. The exercise began in the US, when The Washington Post, The New York Times and CNN began to keep a tab on the volley of lies that emanated from President Donald Trump and his White House who, in turn, dubbed the press the “enemy of the American people”.

In India, this exercise was pioneered by the Alt News website which has won accolades for its diligent and carefully researched exposés of fake news, morphed photographs, historical distortions, and Twitter execution squads. Now India Today has its own version of this exercise plugged after the Hindi axiom, jhoot bole kaua kate (liars get pecked by crows). The number of crows determines the intensity of the lie:1 Crow: Half True; 2 Crows: Mostly lies; 3 Crows: Absolutely false.

The latest three-crow award went to an article quoting former US President Barack Obama as saying that terrorist attacks on India are impossible as long as Narendra Modi remains prime minister.

After it was published on a news website, Oriental Times India, it went viral on social media. Wrote India Today: “On December 26, the NIA busted an Islamic State (IS) terror module in Delhi and Uttar Pradesh and arrested five and detained ten people. India Today Fact Check found that Obama never said what is being claimed in the article. Moreover, the NIA press release nowhere mentioned that the arrested people planned to attack Ram Janmabhoomi. The Facebook post of Oriental Times India has already been shared more than 5,500 times at the time of filing the report.”

There goes Rajdeep Sardesai yet again, wading into territory that he could have avoided which in turn would have saved him from needless embarrassment. A couple of weeks ago, he had thanked Imran Khan for the release of an Indian national who had been lodged in a Pakistan jail for six years, when in reality, it was a court in Pakistan that ordered that Hamid Nehal Ansari be set free. This time, it is a yarn about dwindling tourist footfall in Goa that had him out hit wicket. “Goa is witnessing a 30 percent decline in footfalls of tourists this year. High GST on hotels, hiked airfares part of the problem.. larger issue: has Goa tourism simply failed to move to next level.. Goa has so much more to offer than a Phuket yet well behind in tourism,” he tweeted.

But he was soon slammed by Sanjiv Kapoor, Chief Strategy and Commercial Officer of Vistara airlines. Kapoor said:“Goa loads have shown no decline. In fact they have added new flights this year”; Goa Tourism’s website showed that during 2017-18, there was a 22.98 percent growth in tourist footfall in the state. Around 7.8 million tourists visited Goa in 2017, double the number four years ago, and five times the state’s population itself, while the number of hotels have nearly tripled in the last 10 years, from 42 in 2008 to 113 in 2018. Goa Chief Minister Manohar Parrikar projects the number of tourists at 10 million in 2020.

Defence Minister Nirmala Sitharaman posed with her daughter for a photo op. True or false? True, according to a Facebook group, “We Support Narendra Modi”, which posted a picture of Sitharaman with a uniformed woman officer of the Indian Army. It was titled “Picture Of The Day” and captioned (in Hindi): “Defence Minister Nirmala Sitharaman with her daughter, Jai Hind. Jai Bharat.” The post attracted 15,000 likes and over 800 shares. Another Facebook page, “BJP: Mission 2019”, posted the same photograph.

False, according to Alt News, which researched the item. The watchdog portal writes that the photograph and the accompanying text are also widespread on Twitter. From a handle @Ashok6510, it was retweeted 400 times and liked over 900 times. @Ashok6510 is the same individual who had earlier tweeted a video from Jharkhand, falsely claiming that it depicted Muslims thrashing Rajputs.

“Among those who circulated the post were the ones followed by senior BJP leaders including Railway Minister Piyush Goyal’s Office, BJP President Amit Shah and the party’s spokesperson, Sambit Patra,” Alt News discovered.

It adds that because of widespread circulation on social media, the official handle of the Principal Spokesperson of the Defence Ministry tweeted this statement: “CLARIFICATION. This is the photograph clicked at the request of the Army officer appointed as the LO to the RM during an official visit. She is NOT the daughter of the RM as suggested in some social media platforms pic.twitter.com/mkBQt2dLCK—Defence Spokesperson (@SpokespersonMoD) January 2, 2019”.