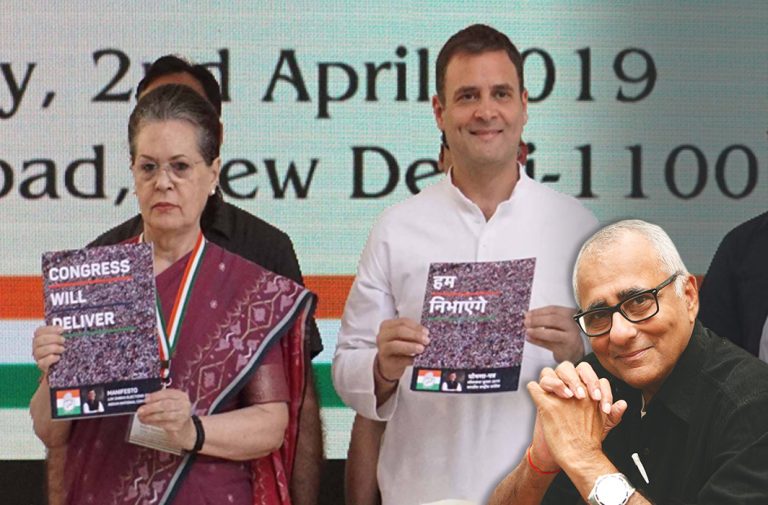 I rarely read party election manifestos. Not because I don’t want to, but because after the first two paras they put you to sleep. They are repetitive, non-specific, boring, prolix and lack verisimilitude. Hence, y-a-w-n. But the Congress party election 2019 manifesto entitled, “Congress Will Deliver” actually woke me up. Mainly because it is rooted in current reality and presents a road map from which all political groupings in this country could benefit.

Forget whether or not the Congress will return to power and implement its promises. What is important is that its think tank has produced a blueprint for constitutional, economic, political, administrative and social refor as I have never seen before. It was as if India’s Founding Fathers, having watched the country evolve since 1947, had gathered once again in a Constituent Assembly, and made experience-based recommendations for changes to keep pace with emerging needs and fix past errors of omission and commission committed against the idea of India by all previous governments which ruled from Delhi.

It is a transformative document which does a remarkable balancing act of promoting greater state involvement in alleviating poverty, providing jobs and education, and enhancing welfare schemes while simultaneously encouraging more decentralisation, individual liberties, transparency, federalism and freedom from government meddling in private lives and entrepreneurship. Encompassing all aspects of Indian life, it has brought the national debate back to the grassroots business of fixing your country rather than fixing your enemies.

It has provoked fierce condemnation from Congress’s political rivals who have called it “a pack of lies”, “dangerously subversive” and even a blueprint for the “Balkanisation of India”. It has, nonetheless, given the Congress a new liberal identity of its own after a long period waffling and soul-searching. The document neither pulls punches, nor does it equivocate. Significantly, on economic matters, it makes a compelling break with the past in advocating a special budget aimed at the agricultural sector much in the way that the Railways has a budget of their own.

Some of the most eye-catching promises that make this a manifesto with a difference include:

“Congress will guarantee artistic freedom. Artists and craftsmen will enjoy the freedom to express their views in any form without fear of censorship or retribution. Attempts by vigilante groups to censor or intimidate artists will be viewed seriously and action against them will be taken according to the law.”

“Appointments to the Lokpal will be made in accordance with the Lokpal and Lokayuktas Act, 2013. The Leader of the Opposition in the Lok Sabha and, in the absence of such a leader, the leader of the largest Opposition Party will be a full-fledged member of the selection committee.”

“Congress promises to take strong action with respect to crimes against women, Scheduled Castes, Scheduled Tribes and minorities. The law will be applied on the perpetrators without fear or favour. They will not be allowed to walk on the streets with a sense of impunity.”

“Congress has stood witness to the developments in Jammu & Kashmir since the Instrument of Accession was signed on 26 October 1947. Congress affirms that the whole of Jammu & Kashmir is part of India. We also acknowledge the unique history of the State and the unique circumstances under which the State acceded to India that led to the inclusion of Article 370 in the Constitution of India. Nothing will be done or allowed to change the Constitutional position.”

See what I mean?

For readers of our magazine, I will quote from sections concerning reforms in the judiciary as well as the legal and law and order machinery:

All in all, a breath of fresh air. A 55-page document, aesthetically designed and presented. Worth a read, if only to know what’s wrong with the country.