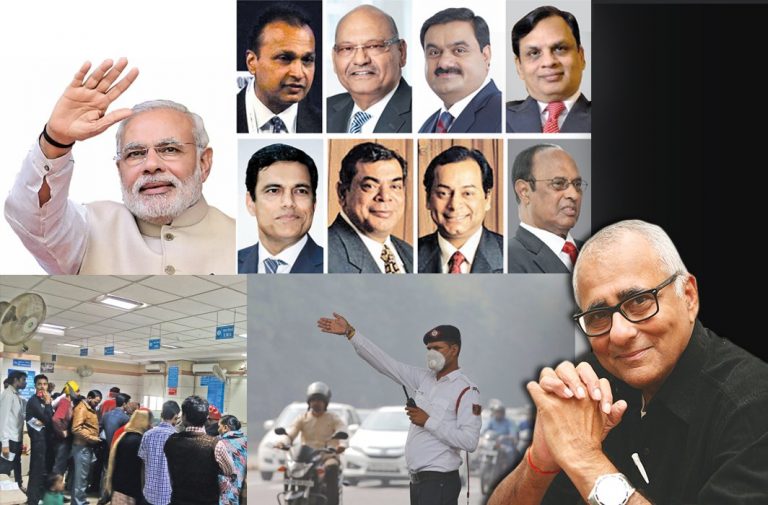 Above: (Clockwise from top left) Some evergreen offers in this issue include a SWOT analysis of Modi’s three years in power; an exclusive account on the country’s super rich, responsible for NPAs in banks; air pollution playing havoc in NCR; and frauds related to demonetization

Putting together a year-end issue is not as simple a task as it appears to be when you look at the finished product. It’s not a case of randomly slapping together 20 ready-made stories from previous issues, churning out new headlines and packaging them within perfect binding. The task is onerous and challenging precisely because it is not random. It must be calibrated to editorial precision as not only a readers’ digest reflecting the year that was for future reference but also the unique character, spirit and the vision of the magazine.

As the year drew to a close, this chore fell on the shoulders of Senior Managing Editor Dilip Bobb, a veteran of uncountable similar missions in his previous editorial avatars. With his distinctive aplomb and finesse, and ably assisted by Deputy Managing Editor Shobha John, Deputy Editor Prabir Biswas, Art Director Anthony Lawrence and his crew, Bobb virtually conjured up a keepers’ item.

When your cover headline says “The Best of 2017”, you had better mean it. Especially when the readers of India Legal have become increasingly discerning and more demanding, and other publications have begun to recognize the huge importance and growing popularity of legally-oriented journalism. More front-page headlines are coming from the courts and judicial system than ever before. And there’s a scramble between editors and reporters to take the lead.

Luckily, because India Legal has pioneered this field, our worthy competitors are mostly playing catch-up. It would have been a simpler editorial undertaking to pack this commemorative issue with the major court cases which impacted India. We covered them all, using our extended team of legal associates and dedicated stringers spread across the court system of the country for blow-by-blow accounts which appeared on our increasingly popular website www.indialegallive.com as well as full-bodied stories in our weekly magazine.

Some of the significant legal decisions that figured in our magazine last year were the acquittal of former telecom minister A Raja and the rest of the accused in the 2G spectrum “scam”; the Supreme Court ruling the Muslim divorce practice of triple talaq as unconstitutional; a nine-judge bench of the apex court ruling that the right to privacy was an integral part of the right to life and personal liberty in response to a challenge to the government’s biometric identity (“Aadhaar card”) scheme; the acquittal (after having served four years in prison) of the Talwar couple in the murder of their daughter Aarushi; the Supreme Court validating the death sentence awarded by the Delhi High Court to all the four convicted of the gang-rape and murder of “Nirbhaya” Singh; the sentencing of Dera Sacha Sauda cult leader Gurmeet Ram Rahim Singh for the rape of his followers; the TADA court’s death sentences to two of the six accused of perpetrating the 1993 Bombay terror blasts.

What makes this special issue special is that it showcases major offbeat stories tackled by India Legal—articles and analyses and investigations which kept us ahead of the pack. Some examples in this issue.

In Demons of Digitalisation, Karan Kaushik focused on people whose bank accounts were fraudulently emptied by tricksters and crooks  taking advantage of the government’s post-demonetization push for digital banking. “Indians are being exhorted to adopt e-platforms at a fast pace,” wrote Kaushik, “but where is the security?”

Ajith Pillai’s India’s Poor Little Rich Men was a barn-burning exclusive which showed that those responsible for bad debts and NPAs were mainly India’s top business houses. “It is the country’s super rich who have caused much of the distress in the banking system,” Pillai said.

In Caught, Finally! Sajeda Momin explained that though the extradition of liquor baron Vijay Mallya from the UK will be easier said than done, it will set a good precedent for those who cross international borders to escape the consequences of their crimes. India Legal did the story after Mallya was arrested by Scotland Yard and released on bail.

The erudite analyst Shiv Visvanathan wrote in Interpreter of Maladies: “In three years, middle class majoritarian India has internalised Modi as if he is the new Roget’s Thesaurus of modern life. He has created a world that people want to believe in and they believe he is forging the Open Sesame to this world.

“As the Ali Baba of Globalisation, he is incomparable. Corporations from Adani to the banks love him. The difficulty for an Indian critic is to extract himself from the rhetoric and produce a more dispassionate narrative.”

Not to be left behind was environmentalist author and journalist Ramesh Menon, who reminded readers in Choking to Death… that year after year, the NCR region suffers from the deleterious effects of smog due to wrong policies on vehicular traffic, garbage disposal and stubble burning, leading to an environmental emergency. “What we are seeing today will be replicated next year too unless drastic measures are taken to deal with the problem. That requires political will and determination,” Menon emphasizes.

These are only some sample evergreen offerings on our menu from the year gone by as we prepare to meet the challenges of the new one with the undiminished initiatives and energy of our editorial team.

Have a great new season.