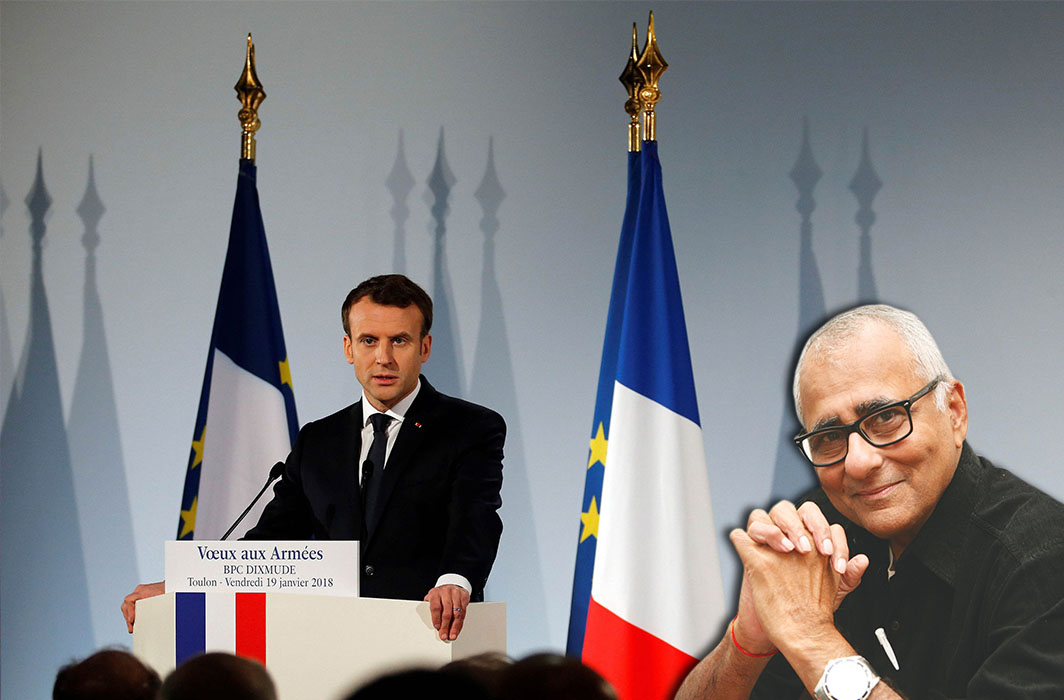 The issue of nationalism versus patriotism jumped centre-stage last week when French President Emmanuel Macron, in what is widely recognised as a jab at America First Trumpism, stated in Paris: “Patriotism is the exact opposite of nationalism…Nationalism is a betrayal of patriotism.” He added: “In saying, ‘Our interests first, whatever happens to the others’, you erase the most precious thing a nation can have, that which makes it live, that which causes it to be great, and that which is most important: its moral values.”

Macron’s illustrious predecessor Charles de Gaulle, The New Yorker reminded us recently, had drawn that distinction, at the risk of his own life:  “De Gaulle knew that the patriot loves his place and its people and its idiosyncrasies; while the nationalist, of whom, for him, Adolf Hitler was the clearest and worst example, has no particular sense of affection for the place he advocates for (he is often an outsider to it, as Hitler, an Austrian, was to Germany) but channels his obsessive grievances into acts of ethnic vengeance.”

As India inches closer to its next general election in the coming year, competitive nationalism appears to be the emerging stage on which political battle will be waged. The BJP, positioning it­self as India’s only “nationalist” party (it does not differentiate between the term and its version of “Hinduism”) has long been and continues to be the first responder. The latest weapon in its inventive armamentarium of nationalist-Hinduist firepower is name-changing: rechristening Islamic-sounding names of roads and cities to restore the glory of the Hindu millennium.

The purpose is to block any history that does not conform to the binary narrative of the ruling dispensation. One of the most distressing examples of this ideological blitzkrieg was narrated in a recent article by the famous scholar, Audrey Truschke, Assistant Professor of South Asian History at Rutgers University. She is the author of two books, Culture of Encounters: Sanskrit at the Mughal Court (Columbia University Press, 2016) and Aurangzeb: The Life and Legacy of India’s Most Controversial King. Headlined, “Hindu nationalists increasingly use anti-Semitic slurs to target me,” she writes: “I awoke to the following tweet, ‘I hope another Hitler comes back and finishes off your people’, accompanied by a picture from 1945 of the bodies of dead Jews piled outside a liberated concentration camp. Since then, I have been regularly attacked with anti-Semitic language and tropes on social media, especially on Twitter.”

The professor, even though her last name suggests it, is not Jewish. But her works often run counter to the new “nationalist” historical narratives. She writes in Scroll: “I have personally received dozens of anti-Semitic messages over the last few years from Hindu nationalists and those sympathetic to their cause. These ugly attacks use vicious anti-Semitic slurs, frequently invoke the Holocaust, and draw on crude anti-Semitic tropes such as that I am somehow pursuing my academic research for the money foundational to his understanding of twentieth-century history.”

Given the rapid rise of this toxic environment in India, it is not hard to understand why the author of the country’s national anthem, the prescient Nobel Laureate Rabindranath Tagore decried nationalism as a scourge on humanity.

The philosopher-poet believed that India survived as a country because it has never had a real sense of nationalism. He admits that even though from childhood he had been “taught that the idolatry of Nation is almost better than reverence for God and humanity”, he had later outgrown that teaching, “and it is my conviction that my countrymen will gain truly their India by fighting against that education which teaches them that a country is greater than the ideals of humanity”. He wrote this in 1917.

“Europe has her past,” Tagore said. “Europe’s strength therefore lies in her history. We, in India, must make up our minds that we cannot borrow other people’s history, and that if we stifle our own, we are committing suicide. When you borrow things that do not belong to your life, they only serve to crush your life.

“Nationalism is a great menace. It is the particular thing which for years has been at the bottom of India’s troubles. And inasmuch as we have been ruled and dominated by a nation that is strictly political in its attitude, we have tried to develop within ourselves, despite our inheritance from the past, a belief in our eventual political destiny.

“When our nationalists talk about ideals, they forget that the basis of nationalism is wanting. The very people who are upholding these ideals are themselves the most conservative in their social practice. …Our social restrictions are still tyrannical, so much so as to make men cowards. If a man tells me he has heterodox ideas, but that he cannot follow them because he would be socially ostracized, I excuse him for having to live a life of untruth, in order to live at all. The social habit of mind which impels us to make the life of our fellow-beings a burden to them where they differ from us even in such a thing as their choice of food is sure to persist in our political organization and result in creating engines of coercion to crush every rational difference which is the sign of life. And tyranny will only add to the inevitable lies and hypocrisy in our political life. Is the mere name of freedom so valuable that we should be willing to sacrifice for its sake our moral freedom?”

Nearly a quarter of a century later, George Orwell, the British essayist and author of 1984 decried “nationalism” as, first of all, “the habit of assuming that human beings can be classified like insects and that whole blocks of millions or tens of millions of people can be confidently labelled ‘good’ or ‘bad’. But secondly — and this is much more important — I mean the habit of identifying oneself with a single nation or other unit, placing it beyond good and evil and recognizing no other duty than that of advancing its interests.”

He, too, stressed that nationalism must not be confused with patriotism. Both words are normally used in so vague a way, he observed, “that any definition is liable to be challenged, but one must draw a distinction between them, since two different and even opposing ideas are involved. By ‘patriotism’ I mean devotion to a particular place and a particular way of life, which one believes to be the best in the world but has no wish to force on other people. Patriotism is of its nature defensive, both militarily and culturally. Nationalism, on the other hand, is inseparable from the desire for power. The abiding purpose of every nationalist is to secure more power and more prestige, not for himself but for the nation or other unit in which he has chosen to sink his own individuality.

“Every nationalist is haunted by the belief that the past can be altered. He spends part of his time in a fantasy world in which things happen as they should – in which, for example, the Spanish Armada was a success or the Russian Revolution was crushed in 1918 – and he will transfer fragments of this world to the history books whenever possible. Much of the propagandist writing of our time amounts to plain forgery. Material facts are suppressed, dates altered, quotations removed from their context and doctored so as to change their meaning. Events which, it is felt, ought not to have happened are left unmentioned and ultimately denied.”

As Indians prepare for the political battles that loom or are already upon them, they would be wise to ponder, again, the thoughts of Tagore or follow the principal characteristics of nationalist thought as defined and written by Orwell which are summarised below:

Obsession. As nearly as possible, no nationalist ever thinks, talks, or writes about anything except the superiority of his own power unit. It is difficult if not impossible for any nationalist to conceal his allegiance. The smallest slur upon his own unit, or any implied praise of a rival organization, fills him with uneasiness which he can only relieve by making some sharp retort.

Instability. The intensity with which they are held does not prevent nationalist loyalties from being transferable. To begin with, as I have pointed out already, they can be and often are fastened upon some foreign country. One quite commonly finds that great national leaders, or the founders of nationalist movements, do not even belong to the country they have glorified.

Indifference to Reality. All nationalists have the power of not seeing resemblances between similar sets of facts. A British Tory will defend self-determination in Europe and oppose it in India with no feeling of inconsistency. Actions are held to be good or bad, not on their own merits, but according to who does them, and there is almost no kind of outrage—torture, the use of hostages, forced labour, mass deportations, imprisonment without trial, forgery, assassination, the bombing of civilians—which does not change its moral colour when it is committed by “our” side.