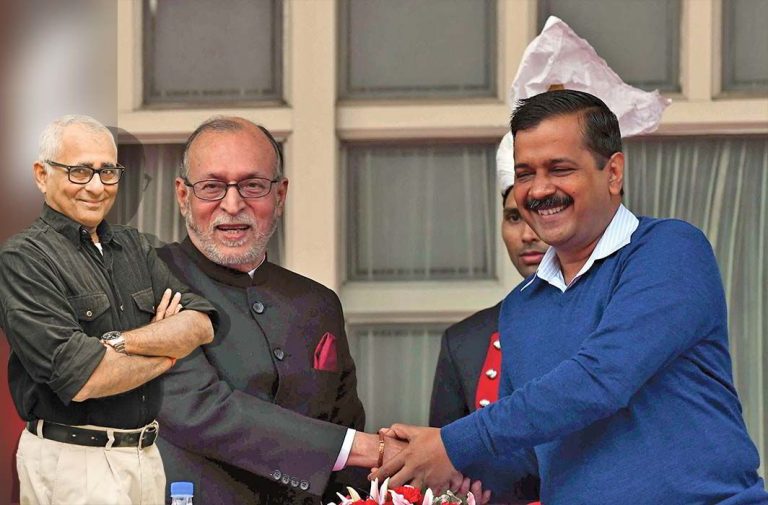 The ugly tug-of-war between the “state” of Delhi and the lieutenant governor (LG) seems finally to be coming to a head. This ungainly power struggle, which has made a mockery of good governance in the nation’s capital, hit the headlines following the AAP’s landslide victory in 2015. Chief Minister Arvind Kejriwal continually screamed from the rooftops that the LG, at the behest of his political masters running the central government, was behaving like an oriental despot and refusing to let the state machinery function.

There is some verisimilitude in the charges that Kejriwal’s eccentric style of functioning, his lack of tact and penchant for gratuitous confrontation had something to do with irritating and alienating former LG Najeeb Jung to the point of aggressive hostility. But there is no gainsaying that even though Kejriwal was his own worst enemy, he was chosen to do a job with the overwhelming support of the electorate—the real sovereigns—while Jung was parachuted into his post by a ruling party which was and remains innately hostile to its bête noir, the irascible Kejriwal who is, to boot, a practised public baiter of Prime Minister Narendra Modi. Also, it is incontestable that Jung threw a monkey wrench into important administrative decisions and appointments the chief minister tried to make to move Delhi forward. And hapless Delhiites suffered needlessly because of this untenable gridlock.

Jung’s departure and replacement by another viceroy-bureaucrat, Anil Baijal, as the 21st LG of Delhi has not materially altered the situation. The matter is hanging in the courts which must, perforce, draw a fair and workable line between the constitutional powers and their perfunctory misuse by an LG, and the legitimately constituted authority of a chief minister who draws his authority to govern from (WE) the people.

The question arises—where does true sovereignty reside? Agreed, Delhi is a special case: it is the seat of India’s central governance, with its own set of law and order compulsions arising from the presence of international embassies, the residence of the president of India as well as members of parliament and an assortment of VIPs. It possibly needs a stronger central role in managing its affairs than do other states.

But does that give the LG the unfettered right to play political one-upmanship with a popularly chosen government in day-to-day administrative matters such as the appointment of inquiry commissions or wage negotiations with cleaning crews or transfers and postings of officials?

The AAP government decided last year to ask the courts to rule on some of these vexatious issues. The High Court ruled that the LG is the administrative czar of Delhi. Unfazed by this ruling, the AAP has appealed to the Supreme Court.

From some of the apex court’s initial comments, in hearings now underway, a few analysts have jumped to the conclusion that Kejriwal’s case has suffered a resounding blow. Much of this stems from the Court holding that “prima facie” the LG enjoys paramountcy.

But here’s the rub. The Bench also said that the LG cannot “sit over files” beyond a reasonable period and must refer to the president matters over which he has a difference of opinion with the Delhi government.

The case is being heard by a five-judge constitution bench headed by the Chief Justice of India, Dipak Misra. Gopal Subramanium, the senior attorney leading for the Delhi government, argued that “an elected government cannot be without any power.” The LG, who reports to the central government, cannot use his power under the Constitution to “stultify daily governance by sitting over files.”

Subramanium added: “More than 1.14 lakh vacancies are there, but I cannot fill it up and have to seek LG’s permission. I can’t take steps to stop deaths in sewers. This is hampering governance.”

A “harmonious” interpretation of Article 239AA is required to “fulfil the constitutional mandate for a democratically elected government in Delhi,” the lawyer argued. The Aam Aadmi Party government has also told the top court that under the current dispensation “no civil servant respects any minister as head of the department. How can any decision then be implemented?”

The “balance” is ultimately what the Court is looking for. This was evident in an observation made by Justice DY Chandrachud that the LG cannot indefinitely hold files and is constitutionally obligated to refer differences of opinion with the council of ministers to the president under the provisions of the Constitution. The LG should have to record his reasons for decisions on files, he said.

Justice Misra virtually ruled out any scope for the LG to interfere in the day-to-day functioning of the government: “Actually it has to be participative governance. There has to be some kind of harmony. Yes there cannot be day-to-day interference by the Governor. Even if there is interference or discussion some sanctity has to be added, it should be value oriented…”

On a wider constitutional canvas, keeping in mind Delhi’s peculiar standing as a state, the issue is really about creative federalism on which the Indian nation was glued together. Founding Fathers Jawaharlal Nehru and BR Ambedkar were extremely wary that governors’ powers to dismiss popular state governments under Article 356 would be misused and politicised. They insisted these powers be curtailed or used only in the rarest of rare cases like a total constitutional meltdown.

The Founding Fathers envisaged governors to be the agents of the constitutional central polity and not the handmaidens of any political party. This precept has been abused ad infinitum ad nauseam by all political parties. It is indeed encouraging to see that the Supreme Court has not shied away from attempting to grapple with an issue that goes to the very root of creative federalism.