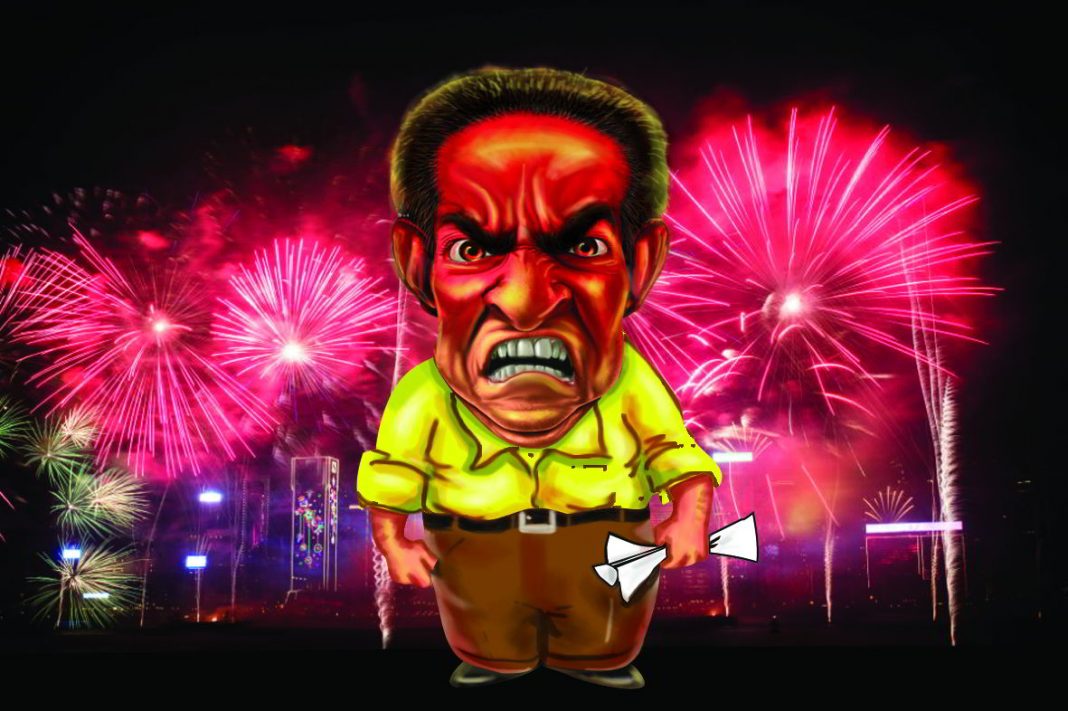 Only in India can this happen. We have been witness to a display of fireworks even before the festival kicks off. It is not a case of premature explosions but the screams of protest by some sections of society over the Supreme Court’s ban on the sale of firecrackers. Tearfully, they are not protesting against the ban but what they see as a deeper conspiracy by a minority against the majority. Here’s some Deepavali light on the issue.

Protester: This is shocking, disgraceful, an insult, a slap in the face, a kick in the teeth, a rap on the…this has been going on for too long. It must be stopped now with a firm hand and heavy boots before it spins out of control like one of those chakras my children love…

Innocent Bystander (IB): I’m sorry, I can see your face turning saffron with anger and frustration, but what is this fuse that someone seems to have lit?

Protestor: Precisely. I cannot light a fuse thanks to this bombshell about banning celebrations for Diwali in the capital. I tell you, it is a capital crime, a conspiracy, like one of those smoke bombs which conceal the real truth. The truth is that this is a deliberate attack against Hindu festivals and Hinduism. We cannot take this assault on our identity, we are being pushed to the wall with cluster rockets being fired at us from all directions.

IB: But this is a ruling by the Supreme Court?

Protestor: We Hindus believe in the Supreme Being and if we cannot celebrate his divine presence on Diwali, we are doomed, really doomed I tell you (sputtering).

IB: I say, you are sputtering like one of those anars, you might get a heart attack…

Protestor: We are being attacked, this is like a flaming arrow in our heart.

IB: The reason behind the judgment was to do with dangerous particles in the air, so why are you sounding prosecuted?

Protestor: Because of these dangerous particles in the air. Can’t you smell the sulfur? Why are there no restrictions on other religious communities and celebrations? They should be banned as well.

Protestor: Like Id, when Muslims do their namaz on the road. Why are they allowed?

IB: Are you comparing that to air pollution which affects children for life?

Protestor: To some of us, that is no less polluting. They should also ban bakras on Bakri Id, they get my goat.

IB: Are you serious?

Protestor: Anything with horns and cloven hoofs is the devil’s work. We have banned beef, next is goat’s meat. These non-Hindus must be taught about proper culture.

IB: What about Christians?

Protestor: We should ban Christmas cake, Santa Claus, Easter eggs and sparklers, and convert places of worship into gaushalas. That was where Christianity started, in a cowshed in Bethlehem.

Protestor: I was educated in a missionary school.

IB: What about Sikhs? They are industrious and hard-working…

Protestor: Never mind that, they cause traffic jams when they take out processions on Vaisakhi and Guru Nanak’s birthday, how can they be allowed to do that?

IB: So if the kanwariyas do it, it’s fine…

Protestor: They are carrying holy water, the purest form of sacrifice and the purest water from the Ganga.

IB: I was told that it is polluted.

Protestor: Don’t believe everything you read about pollution, there is a lot of fake news and false propaganda going around.

IB: Surely you have nothing against the Parsis, they are an asset to society?

Protestor: They came here from Iran, a Muslim country, so there must be some pollution involved.

IB: What about Buddhists? They are peace-loving and that Dalai Lama is a lovely chap.

Protestor: They came from China, so there must be some pollution.

IB: And the Jains? Never mind, you seem to have an agenda that covers everybody who does not share your views.