In an apparent defiance of the Forest Rights Act, the state government has bypassed the will of residents of 20 villages in Hasdeo-Arand region and allowed coal mining to the powerful Adani group

Ghatbarra is a non-descript and impoverished village to the south of Ambikapur in Sarguja, North Chhattisgarh. Its only claim to fame is that it sits on 450 million tonnes of coal. The Parsa East and Kete Besan blocks located here were first put on the—much hyped “no go” list of the Jairam Ramesh—led Environment Ministry. They were later taken off it in 2011 following hectic lobbying by the state government and private players eyeing the coal deposits, the Adani Group in particular.

Their pressure finally culminated in the state government issuing an executive order last year dismissing the community rights of tribals over the forest land under which lies the precious coal. Mining has begun in phase I, while the villagers of Ghatbarra have challenged the executive order in the Chhattisgarh High Court. Many believe they are virtually fighting a losing battle. 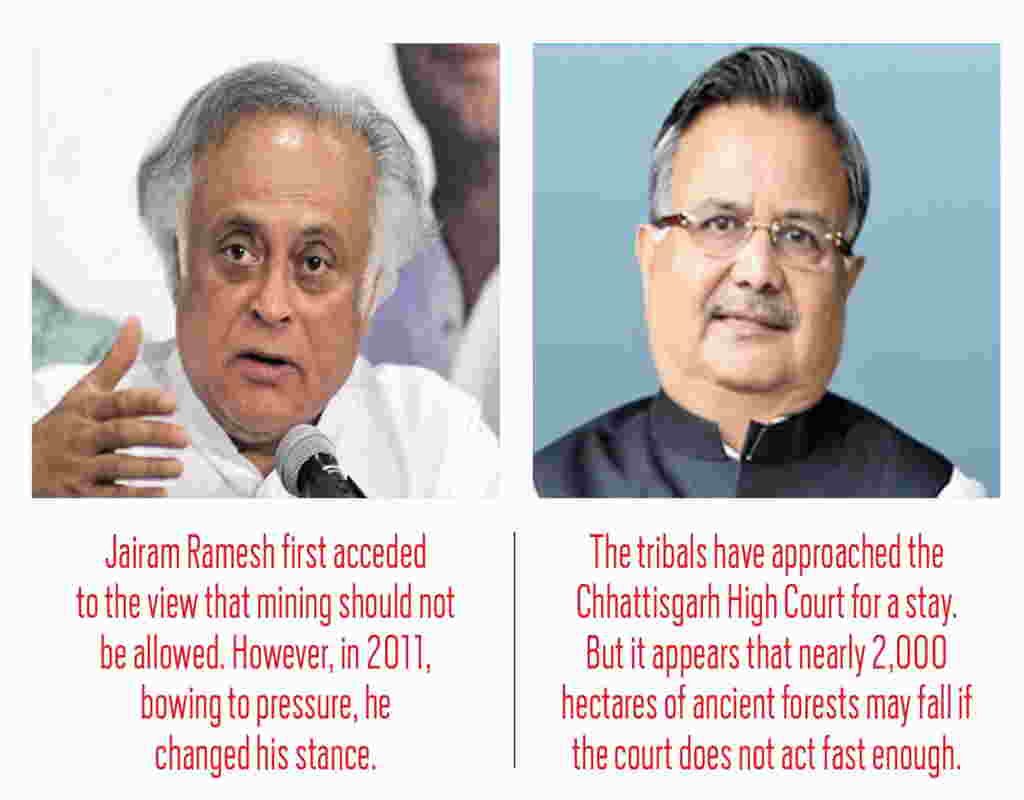 The Scheduled Tribes and other Traditional Forest Dwellers (Recognition of Forest Rights) Act known better as FRA provides for approval by the gram sabha before traditional forest lands can be handed over for mining activity. It also lays down a resettlement procedure under Section 4 (2) and before tribals are suitably relocated, no land acquisition proceedings can start. The Act provides not only for resettlement, compensation for tribals but also provides protection to wildlife. So, the ministry of environment and forests (MoEF) clearances require not just clearance under the Forest Protection Act but also under FRA and approval from the wildlife warden.

The coal blocks under nearly 2,000 hectares of verdant forests have been allocated to Rajasthan Vidyut Utpadan Nigam Limited (RVUNL) which is in a joint venture with Adani Enterprises.

The coal blocks were allotted to government power companies by the centre on a first-come, first-served basis as against the private sector which had to show investments in the thermal power sector and hence the critical need for coal. Some private companies bypassed this condition by forming joint ventures with state power companies.

The Parsa East and Kete Besan coal blocks have had a bumpy and circular ride, its status changing with the governments both at the centre and state. In 2010, the BJP government in the state had sent a report to the UPA government at the centre that the Hasdeo-Arand forests (where the Parsa East and Kete Basan blocks are located) were thick and critical forest within the meaning of the Forest Act and the state government planned to include Tamor Pingla, Semar Sot and Lemru forest blocks in its Elephant Reserve. The Jairam Ramesh led MoEF seemed to accede to the view and the coal blocks became part of the “no go” areas.

Then slowly Ramesh changed his stance by 2011 as he suddenly approved the project despite a review committee reporting facts from the ground that the blocks were critical to the elephant habitat and that of other species.

Meanwhile, the National Green Tribunal slammed Ramesh and granted a stay till the resettlement of the tribals and wildlife had not been achieved. The Supreme Court subsequently in 2012 vacated the stay and a go ahead under stage II was given by the MoEF. But the statutory approval by the gram sabha had not been obtained by the mining company. On September 3, 2013, the gram sabha of Ghatbarra met and refused to grant permission for mining to the Adanis.

The state government had meanwhile changed its tune by the time NDA came to the centre and now averred that its Elephant Reserve would not include areas falling under the coal blocks. In a 2014 report, its conservator of forests, Ambikapur, also seemed to suggest that there is no known passage of elephants in the above areas. This was in direct conflict with the report of the expert committee formed by the MoEF under the FRA as also the report of the ministry’s own regional office at Bhopal.

The regional office headed by a chief conservator-rank officer had done a ground survey and reported that wildlife clearance cannot be granted as the area was used by elephants as their annual passage in the jungles of Chhattisgarh and Jharkhand. Sensing that the forests might yet be in great danger of being taken over, tribals of 20 villages, including Ghatbarra, met in October 2014 and again disapproved of their traditional lands being given on lease for mining.

Following this, in January 2016, the state government took the unprecedented step of issuing an executive order denying the tribals their rights under the FRA. “We have simply said that following the stage II clearance by the MoEF in 2012, the later decisions by the Ghatbarra gram sabha are infructuous,” says a senior forest official of the Chhattisgarh government.

The legal question here is whether the stage II clearance under Ramesh in 2011-12 without the approval under FRA is a valid order in itself. The Bilaspur High Court is at this very moment examining the validity of the 2012 order as well as the order of the state government which appears to invalidate the FRA.

The mining company has since begun mining in the area with more than three lakh trees likely to be cut in phases. The tribal villagers want a stay on the state government’s executive order. But it appears that nearly 2,000 hectares of forests may fall if the Court does not act fast enough.