Yes, I’m a woman and together, we shall overcome

This room full of refugee Afghan women, who’re being supported by several NGOs in India, is brimming with high spirits, hope and great resilience. It may be their cause, but it’s the cause of all women to mutually support each other to overcome. 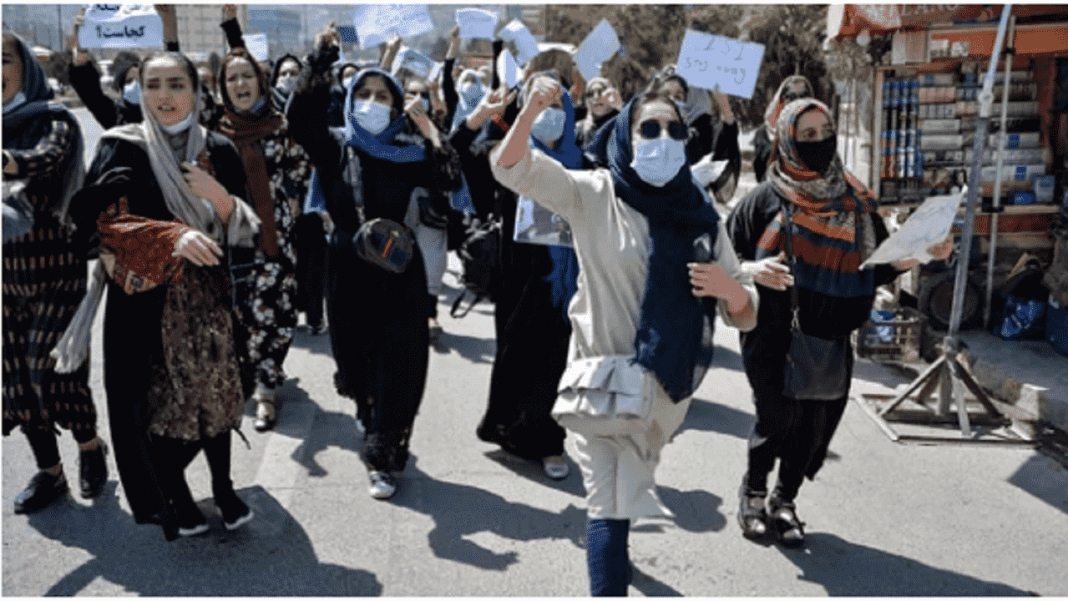 Tucked in a narrow lane of South Delhi is a small basement where Afghan women throng to acquire new skills assisted by Samarpan Foundation. From all walks of life – housewives, doctors and even government officers – learn crochet, potli making, tailoring and even how to make sustainable cloth sanitary napkins, in an effort to survive and rebuild their lives.

Merrily chattering away among themselves in a mix of Pashto, Dari and Farsi, they quickly switch over to Hindi to speak to me. I had gone as an advocate representing NGO SAFMA with grandiose plans to address them on their rights, but was soon humbled by their spirit.

The heart rendering words of a woman stirred me…. not in despair, not in defiance but a simple statement of fact “Majboori sab kuch sikha deti hai” (Necessity teaches one everything). The words of an old Hindi song resonated in my mind as if they were promising themselves-“We shall overcome someday. Deep in my heart, I do believe…..”

Escaping persecution and violence in Afghanistan, these women have taken the bold step of leaving behind their loved ones and coming to India for a better life. Women always are the worst sufferers in any conflict zone, yet patriarchal mindsets exclude them from any decision making roles.Instead of supporting and encouraging them, society places the burden on women to struggle for equality and freedom. Not surprising in spite of Taliban’s publicity blitz vowing to respect women’s rights, and in face of the rising crisis a sense of fear pervades, for it is the women who have most to lose.

Scenes of Taliban fighters violently suppressing a women’s protest in Kabul demanding inclusion in the yet-to-be named Taliban government, were being shown on TV. On a modest gathering of 100 women, tear gas, rifle butts and metal clubs were used. Statements such as “Women can’t be Ministers, they should give birth”…flashed in the news. Don’t they seem quite familiar, even in India? Haven’t we heard them before? The first thing a patriarchal society does is impose its authority on women…. deciding what they should wear, whom they should talk to or what they should eat or not eat (if widowed).

The key to empowerment of women is education and employment.Despite Taliban’s claimof not prohibiting women’s education, female students and teachers express safety concerns as several of them fear walking in the streets, let alone attend educational institutions.

Not a long ago, a 12-year-old Afghan refugee girl was allegedly denied attending classes by her school in Delhi on the grounds of her not having an Aadhaar card. It took a Bench of two women judges, Acting Chief Justice Gita Mittal and Justice Anu Malhotra, to come out in her support and direct the Government of Delhi to allow her studies.  The justices opined that “We do not want a child to lose a year”.

This is a classic example of how women and girls are deprived of their basic right to education and livelihood by various Governments due to lack of documentation. Not-for-profit organisations invests heavily in training such refugee women and providing them with employment opportunities, but are incapable of providing them ‘fair trade’ rates since these women don’t have bank accounts in India.

Indian rules do not permit Afghan women to open bank accounts without an Aadhaar Card, which most of them are unable to get. Although the UNHCR office is authorized to grant them ‘refugee status’ and issue identification cards, however, India is neither a party to the UN Refugee Convention of 1951 nor its 1967 Protocol and as such, does not have a national refugee protection framework.

Thus, such aforementioned women or any similar group is not recognised by the Ministry of Home Affairs, and accordingly unable to enjoy the rights given in other countries like the UK or US. Simply put these women do not have the legal right to work in India, making them vulnerable to exploitation in the unorganized job market, which is also extremely low-paid.

Oblivious to this paradoxical situation, this room full of Afghan women, who’re being supported by several NGOs in India, is brimming with high spirits, hope and great resilience. It may be their cause, but it’s the cause of all women to mutually support each other to overcome.

–The author is an advocate, Supreme Court of India